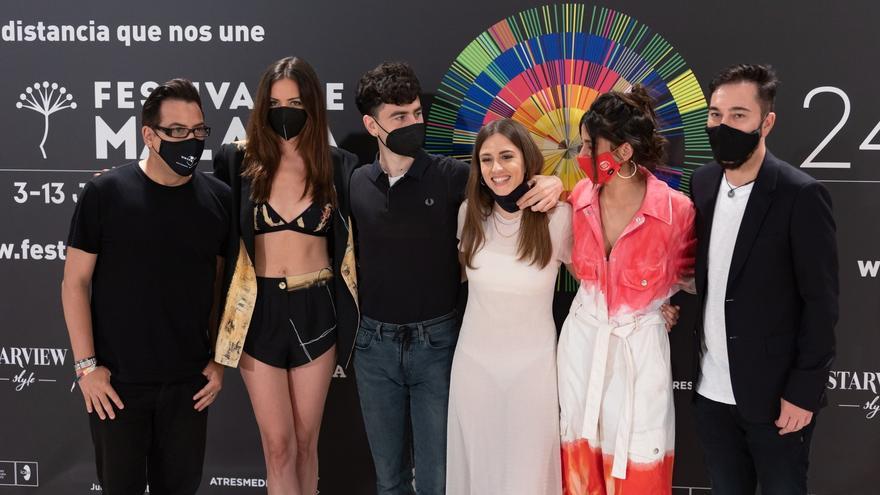 The 24th edition of the Malaga Spanish Film Festival, battering ram of the European competitions in the midst of a pandemic for the second consecutive year, opens its competition for the Biznaga de Oro this Thursday with ‘El cover’, first film by Secun de la Rosa, which is recreated in a personal vision of what is ‘the B-side of success’.

The definition was provided at the press conference for the presentation of the film Marina Salas, last Goya child for ‘Pa negre’ (2010), which reappears as a co-star of this choral film that discovers its interpreters as singers, some of them debuting in that art, such as Álex Monner, and others, such as Carolina Yuste, spectacular, transmuted into Amy Winehouse.

The producer Kiko Martínez (‘Nobody is perfect’) has apologized that the director could not be in Malaga, still convalescing from the covid, although “he is already much better and will be at the premiere”, on July 23. Both actors and producers have pointed out the “accident” of the filming of the film, first due to the stoppage of the pandemic and then with a change in the team that, however, served for De la Rosa to rewrite some scenes and “rethink” in general to give it the “absolutely Secun” tone of the film. Monner said.

The Catalan actor, who does not stop working, has had humor how he became a singer to get the most out of Dani, a young man with a great inner conflict that paralyzes him: he loves music, but is afraid of failing like his father, and suffers thinking that he is one more, like his grandfather, so he chooses to be a waiter and forget the art. With them, sharing the cast (with a cameo included from the director), Lander Otaola and María Hervás and in strategic characters the veterans Susi Sánchez, Juan Diego and Carmen Machi.

Y Benidorm, another character that De la Rosa portrays on his B-face to address the difficulty of being someone else and, like the actor’s life, it is a uniform with many layers that hides the “guerrilla artists” who live on, by and for music , even if they are nobody, even if they are not successful, because in Benidorm “failure is tolerated”. Again, the phrase is put by Salas, to which Yuste points out that those layers of the surprising city are like the mask that artists create “to heal and communicate and that we understand each other: to be better“.

It is his character, Amy Winehouse, who imitates De la Rosa himself when explaining why he is an artist: “One day I answered a foreigner ‘yes’ and I felt that being an actor worked for me”, obsessions, dreams and shyness that define the director , who also interpreting found his place in life, has contributed the producer.

The actors, who adore De la Rosa, have explained that the first thing the director explained to them was the concept of ‘cover’, an artist who does not have his own songs, but rather imitates those of another, but also “what the word contains, what it covers, what the artist cannot see,” added Salas.

The young performers opened a debate on the way in which an actor “covers himself”, hides in the characters, and the opportunity or not that one disappears in the other. For Monner, you have to get away from yourself to be the character, “like Dany Day Lewis.” “I am becoming obsolete as an actor because I bring the character closer to my energy and that is what it does not have to be “, the actor pointed out, to which Yuste replied” they have to give you the opportunity for that to happen “and Hervás has specified: it is” impossible that the character does not have things of yours because he uses your body, your voice, and you use it as a platform to jump “.

Benidorm, land of failures, says De la Rosa in the mouths of his characters, could be a launch pad for this veteran actor and film teacher who makes his debut as a director with a musical, betting on the healing and transforming power of music, with the help by Carlos Narea (historical record producer of artists like Miguel Ríos). And, as a closing, with the voice of Monner, the original song by Antonio Orozco ‘Let them look for me inside’, which, according to Kiko Martínez, he wrote in one afternoon and whose lyrics summarize the whole spirit of the film.