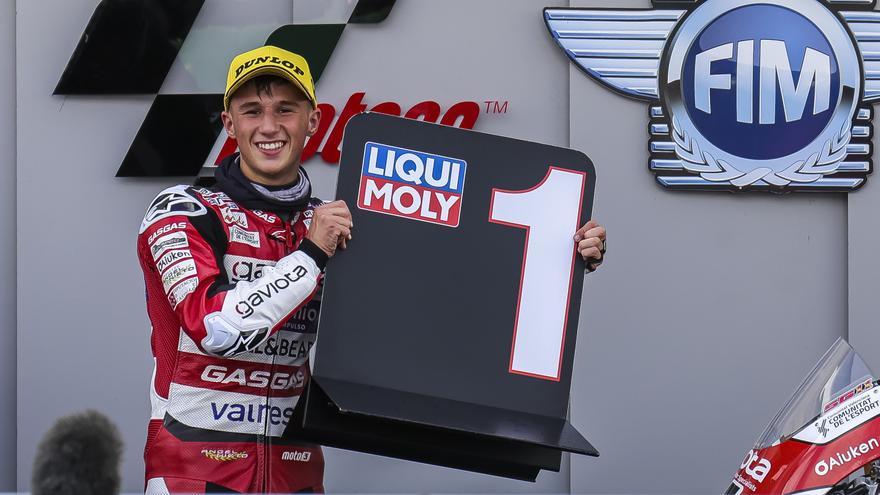 The Spanish Sergio García Dols (Gasgas) made up for his bad luck he had last weekend at the Red Bull circuit when he finished second with a crash included to achieve the third win of the season in the Austrian Grand Prix of Moto3, ahead of the Turkish Denis Öncü (KTM) and the Italian Denis Foggia (Honda).

García Dols, who had already won in France and Catalonia, fell last week in his fight for victory with Pedro Acosta at Spielberg’s Red Bull, but was able to finish second and that defeat was a thorn in the side for the Burriana driver (Castellón), who has now won a well-deserved victory that he knew how to fight on the last lap.

What a piece of victory @ garciadols11! A comeback to remember starting 13th and taking a victory that he very much deserved.

Pedro Acosta, who had to settle for fourth place after being outscored by 48 thousandths of a second by the Italian Dennis Foggia, continued world leader with 196 points, 41 more than Sergio García Dols (155).

The Argentine Hispanic Gabriel Rodrigo (Honda) was already sanctioned yesterday with leaving the workshop street for his action with Ryusei Yamanaka (KTM), which ended with both on the ground and the fracture of the Japanese humerus. Once knew the penalty starred in another incident with the also Japanese Tatsuki Suzuki (Honda) in the second qualifying, in which he was again sanctioned with a long lap to add to his “list” of sanctions for the second race in Austria.

Neither did Spaniard Xavier Artigas (Honda) compete in the race, as he gave a false positive and had to be confined until he gave three negative PCRs.

🙌 Take him in your arms he deserves it! 🙌

What a comeback from @ garciadols11 And how important this triumph in the face of the fight for the World Cup 🏆 @AsparTeam #AustrianGP 🇦🇹 #MotoGP 🏁 pic.twitter.com/ppjYrGfHbD

The Italian Romano Fenati (Husqvarna) came out like a blast But before the first lap was completed, Turkish Denis Öncü (KTM) had already overtaken him and Italian Andrea Migno (Honda) had been left out of the race, who played with Spaniard David Salvador (Honda).

The world leader, the Spanish Pedro Acosta (KTM), who had started from seventh position, took the lead of the race in the second lap, although with a very tight first group and in which changes became a constant, in particular between Fenati, Acosta and Öncü, but also with the Japanese Ayumu Sasaki (KTM) and Tatsuki Suzuki, the Spanish Sergio García Dols (Gasgas) or Jaume Masiá (KTM), who on the fifth lap of the race, and the Italian Dennis Foggia (Honda), behind them.

😮 THE DETAIL: What a saved from @ 37_pedroacosta! How close he came to hitting the ground at the last moment, but managed to avoid the fall! 💥#AustrianGP 🇦🇹 #MotoGP 🏁 pic.twitter.com/xTtZErodba

Who was not in that group was the Spanish Jeremy Alcoba (Honda), who achieved the third best time in training but failed to exit and in the first lap to be relegated beyond the tenth position, from where he began to come back.

At the head of the competition, a trio with Fenati, Öncü and Acosta was formed, who barely had a few tenths of a second over the chasing group, with eight drivers, the last of whom was Jeremy Alcoba and of whom the Japanese Ayumu Sasaki fell literally, in an action in which the South African Darryn Binder (Honda) was also involved and which was investigated by the Race Direction, without any type of sanction.

The advantage of the leading trio, in which Denis Öncü was shooting, did not last long, because in the seventh lap his pursuers had already neutralized the advantage of those to form a new group of eight pilots by joining Masiá, García Dols, Foggia, Binder and the British John McPhee (Honda).

The chasing group, made up of six other riders, was led by Suzuki and included Alcoba -which was sanctioned with a long lap for exceeding the limits of the circuit-, the Czech Filip Salac (Honda), the Japanese Kaito Toba (KTM), the Italian Stefano Nepa (KTM) and the Spanish Izan Guevara (Boscoscuro). Another Spaniard, Adrián Fernández (Husqvarna), had to take the road to his workshop midway through the race, just one lap before the halfway point of the race, having technical problems.

The group of eight leading pilots lost two of their units, Darryn Binder and John McPhee, who were swallowed up by their pursuers, while Fenati, García Dols and Oncü were in charge of setting the pace until that moment. Binder and McPhee briefly linked up with them again, until Denis Öncü wanted to give a change of pace to try to escape and Acosta, who realized the situation, quickly went out in search of him, as did Fenati, while they were definitely left off the hook. the fight for the podium.

Three laps from the end, lap twenty-one, Sergio García Dols went through the inside of turn three to both Öncü and Acosta to take the lead for the first time, but it was short-lived in the first place.

Skirmishes became a constant in the final two laps, until in the last one, Pedro Acosta stuck to the tail end of Öncü’s motorcycle to see where he could overcome him, but from behind Sergio García Dols, who gave a good account of the Turk in the new corner, like the Italian Dennis Foggia, who relegated Pedro Acosta to fourth place on the same finish line.