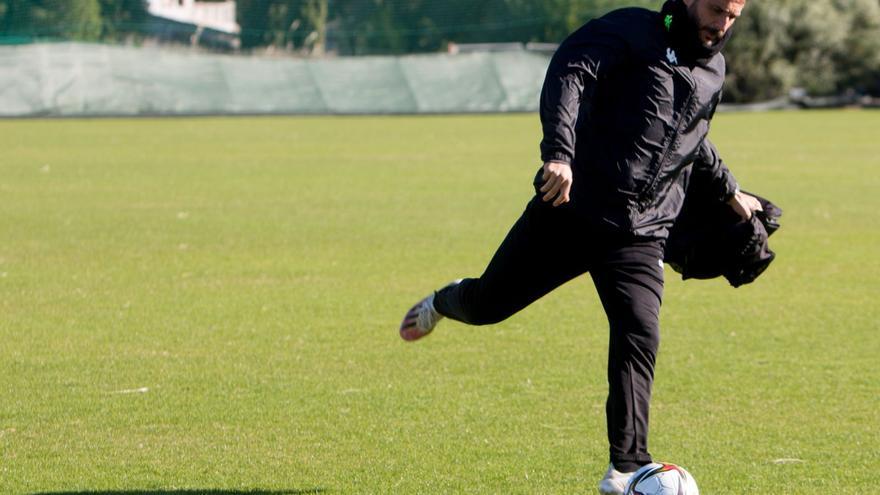 The circumstances are different. The category, too. But the goal is the same: to ascend. Sergio Mora’s Hercules has been able to link six victories, an achievement so unusual that it had not occurred since 2016. Vicente Mir achieved it in his first stage as a Blue and White coach. The Valencian arrived until seven, four in the regular phase and three in the promotion promotion. His story ended badly.

What Juan Carlos Ramírez’s favorite coach never achieved as a member of the Ortiz family was to finish the first round as a solo leader. José Bordalás’s former assistant at Getafe has released his resume as a main coach with this milestone. Is it worth something? No. Does it mean a lot? Yes.

The Madrilenian has managed to turn around a very delicate tactical situation without being devoured by the jaws of the environment and has obtained the honorary title of winter champion, an event that has taken twelve years to repeat itself in the blue and white entity.

Sergio Mora has emulated Esteban Vigo. The “Boquerón” surpassed Irún (fate has a very sibylline humor) at the close of the first round and took advantage of the stumble against Elche of the leader until that moment, Real Sociedad. The crown of the “Apertura trophy”, which in Europe does not count, gave the most important thing in football: confidence. Hercules achieved promotion to First at the end of that course. He did it under strange circumstances, it is true, but without the strength acquired until January, it would have been impossible to reach such a favorable juncture to return to the elite.

The Carmelo del Pozo project has only one objective: to join the First RFEF. For that he needs many more victories, although not necessarily consecutive. Linking triumphs serves to overcome statistics and leave records to beat for the history of the franchise. Hercules de Mora will tear down the great wall if he is able to extend the current streak for three more days.

Before the Civil War

The database of journalist Ramón Pérez, a member of the Hercules Centennial Commission, reveals that the record for consecutive games won by the Alicante team is eight. It was in the 34-35 campaign, just before the outbreak of the Civil War. It was achieved by Manuel Suárez de Begoña, who went from the field to the Herculaneum bench and signed this mythical top in the Second Division.

The Biscayan coach also has the honor of having been, as head of the dressing room, the first coach to bring Hercules up to the First Division. He did it that same season. Later, the escalation of violence in the province that caused the fratricidal warfare in 1936, cut short his successful career and skewed his life. The legendary player and coach of Guetxo, who carried out both professions in Hercules, was, according to the provincial file, executed after being accused of being a Falangist just over a month after the start of the fight by a death squad in a ditch of Aigües.

If Sergio Mora’s team is capable of defeating Granada B, Intercity and Mar Menor, it would pulverize a brand that is on the way to the century of validity. Nobody is obsessed with it, at least publicly. The important thing is to always stay with the options of reaching the leader on the last day to avoid the trance of promotion and ensure promotion directly.

Being the leader alone is so complicated that Hercules had not happened since 2018, in Second B. His home draw on matchday 14, against Castellón, allowed Lluís Planagumà and his team to dominate the standings. That team reached the final of the play-off. Luck failed, but all the precedents push up.

Schedule: Hercules will compete before their pursuers

Hercules will return to the competition before their most direct rivals in the fight for first place, La Nucía and Intercity. The Blue and Whites will start the second round of the League against Granada B on January 22, Saturday, from 4:00 p.m., according to the official calendar already registered on the website of the Royal Spanish Football Federation (RFEF). The Blue and Whites, who have accumulated six consecutive victories, will seek against the Nasrid subsidiary to link the seventh victory. Intercity will receive Eldense on January 23, Sunday, at 11:30 am, initially at the Antonio Solana; and La Nucía, which travels to San Javier (Murcia) to meet the Mar Menor, will do so half an hour later, at twelve noon.