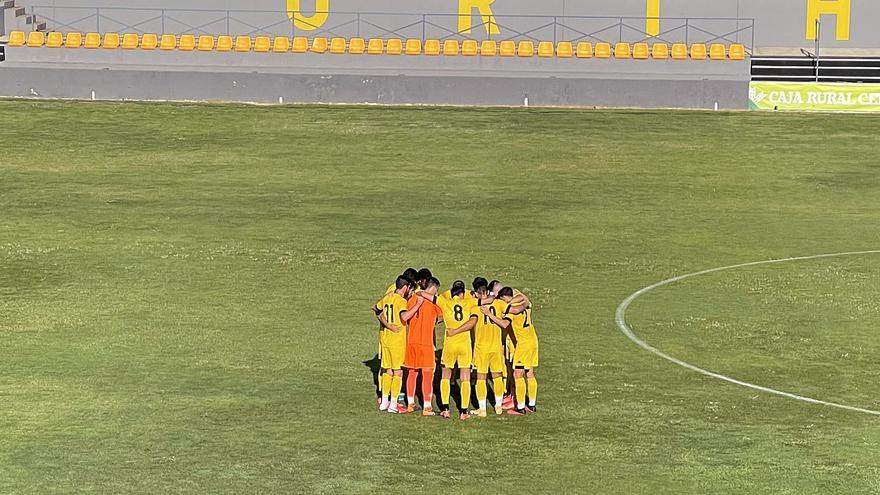 Sergi Molina, with a goal in the first half, gave the victory to Sergio Mora’s men, who showed their superiority on the pitch with respect to a lower-category rival, who put a lot of effort and even at some point scared Alicante with the possibility of matching the crash, something that finally did not happen.

In his first test, Sergio Mora gave minutes to all available troops, except for the newcomer Ufano and Abde, who watched the entire game either from the bench or from the warm-up zone. A decision that will give a lot to talk about.

Mora lined up two practically different eleven in each half, with the exception of goalkeeper Adri, who played almost the entire match. In the first half, Raúl, Nani, David Sánchez, Raúl González, Toscano, Fran, Sergi Molina and the homegrown players Nico, Santi and Solbes completed the line-up. For the second act, the coach chose Diego, Bikoro, Mario, Pedro Sánchez, Pedro García, Aketxe and the youngsters Palmera, Poveda and Velázquez.

Raúl had the first Herculaneum chance to open the scoring, something that didn’t happen until well into the first half. A Toscano center was finalized by Sergi Molina. In this way, the center-back became the first goal scorer for Hercules 2021/22.

After returning from the locker room, Hercules continued to search hard for the callosine goal. Especially motivated to get his first goal in his new team was Aketxe, the man called to make a difference in attack this season as a Herculaneum. The Basque footballer had two good options to open his account, but in neither of them did he find a correct definition.

Another who was especially active in the second 45 minutes was Pedro Sánchez, with the captain’s armband on his arm. The Aspense looked for the weaknesses of his defender on many occasions and touched either the goal in some of them or the final assistance to a teammate. He was seen with a special spark, especially for the current dates.

In the final stretch, Hercules touched the 0-2 on several occasions, but between the Callosa goalkeeper, with some worthwhile intervention and falls offside, the scoreboard no longer moved. The local team also had their option in a direct free kick that went away.

With this victory, Hercules continues with its preparation for the campaign that begins in a few weeks. The next preseason appointment will be this Saturday, in Oliva, against the team of unemployed footballers who train in the AFE sessions.

Yesterday, Intercity obtained a valuable result in order to strengthen its preseason work, by defeating Albacete, a team recently relegated this season to First RFEF.

Gustavo Siviero’s men managed to contain the Castilian-Manchego push for 90 minutes. Between the post, Manu Herrera and his rear, the “men in black” returned to Alicante with a great result against a superior rival, thanks to a target from Josiel Núñez in the last minute, which is the first triumph of this phase high school for the 2021/22 season.