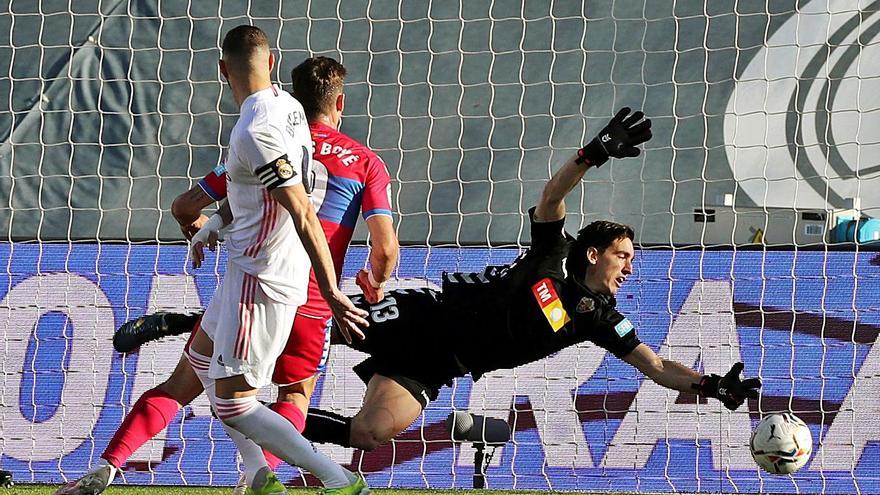 Some numbers that contrast with those obtained at home. Escribá has added two victories against Eibar (1-0) and Sevilla (2-1) in the two games he has played at home. The group from Elche now has two opportunities, in just five days, to break that spell at home. The franjiverdes play on Wednesday (19 hours) the postponed match of the second day, at Sánchez Pizjuán, against Sevilla. And on Sunday (2 pm), the match corresponding to matchday 28 of LaLiga Santander, at the Coliseum Alfonso Pérez, against Getafe de Bordalás.

Escribá will try to get his first points away from home in this second stage as coach of Elche. The Valencian coach has had a tough schedule in his first matches away from Martínez Valero with Barcelona, ​​Granada, Real Madrid, Sevilla and Getafe as rivals.

The franjiverde coach already commented, after beating Sevilla and playing full at home in the two games he has been on the bench, that it would be difficult to maintain those numbers and that, in case of achieving it, permanence was assured. But, at the same time, he indicated that he was convinced that they were going to score points at home. In Granada and Madrid he has been on the verge of achieving it and this week he will try it against Seville and Getafe.

Five losses in a row

The last time Elche scored away from home, still with Almirón as coach, was on January 19 in Valladolid, where after winning 0-2 they ended up drawing two after conceding a goal in the last minutes. The team from Elche has accumulated five consecutive defeats away from Martínez Valero: Valencia (1-0), Celta (3-1), Barcelona (3-0), Granada (2-1) and Real Madrid (2-1). In addition, before drawing in Valladolid, they also lost against Athletic Club de Bilbao (1-0) and Atlético de Madrid (31).

Elche started the season very well away from home and in the first five games they only lost one against Betis (3-1). The franjiverdes began their return to the First Division brilliantly at home, with two victories: Eibar (0-1) and Alavés (0-2). After losing at Benito Villamarín, he was also able to add two good draws against Levante (1-1) and Villarreal (0-0). But after the tie at the La Cerámica stadium, he has only managed to score in Valladolid.

In the 12 matches that remain for the Elche team to finish the competition, six of them are away from Martínez Valero. The two this week in Seville and Getafe and, later, he will visit two direct rivals in the fight for permanence, such as Huesca and Osasuna. He will also have to play in San Sebastián against Real Sociedad and in Cádiz.

The Escribá team, despite being reliable as a local, needs to straighten the course away from home if it wants to achieve permanence. This week he has two good chances, although they are going to be two very difficult opponents. But the franjiverdes already demonstrated on Saturday against Real Madrid that they are capable of standing up to anyone.

The squad will not have any rest days this week

The Elche expedition returned from Madrid on Saturday night and the footballers will not have any rest days this week as they have to play two games: Wednesday in Seville and Sunday in Getafe. The squad carried out recovery training yesterday for the players who started against Real Madrid and more intense for those who did not play or did more minutes. Today, Monday, there will be a new work session, although Escribá has set it for this afternoon, at 5.30 pm, at the Díez Iborra field. In this way, despite not having any rest days, the footballers are going to have more than 24 hours of rest.