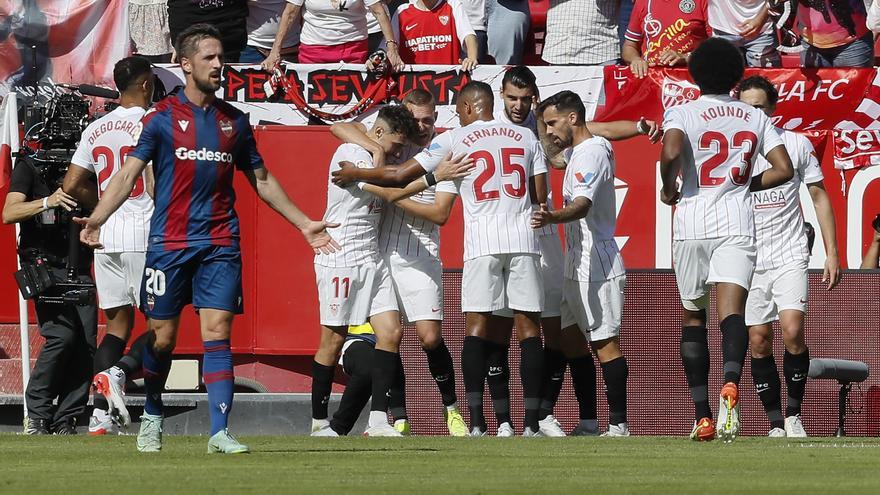 The Sevilla was imposed this Sunday Levante (5-3) in the Sánchez-Pizjuán and settled at the top of the table after a clash characterized by the hemorrhage of goals, with eight, five for the locals and three for the visitors, who were always in tow but never demoralized, although the fragility in defense he keeps them without winning so far this season.

In the first period there were four goals (3-1), all of great execution, and the locals were very incisive from start to finish, while in the second half another four (5-3) were scored, although the reactions del Levante were always countered by Sevilla.

The Valencian team, in which Javier Pereira was serving his second game as coach, had the mission of adding his first win and for this he had to break a streak of four straight games without scoring, after the Badajo coach’s debut was achieved at home against Getafe (0-0) to leave the goal to zero for the first time this year.

Pereira used the foreseeable eleven from the beginning, having injured players such as José Campaña, Roger Martí and Sergio Postigo, while he left on the bench waiting three others who come out of periods of absence due to injury like the Macedonian Enis Bardhi, the montenegrin Nikola Vukcevic and Frenchman Mickaël Malsa.

The Sevilla coach, Julen Lopetegui, for his part, in this continuous series of matches every three or four days, made many changes and highlighted the goal of Serbian Marko Dmitrovic, a regular substitute for Moroccan Yassine Bono, and the return to defense of the French Jules Koundé after overcoming an injury.

An image of Sevilla – Levante. EFE

The Basque also used the Swedish Ludwig Augustinsson on the left side, to the detriment of the Argentine Marcos Acuña, and started others such as Óliver Torres, Munir El Haddadi or striker Rafa Mir, while the Moroccan Youssef En was left on the bench. -Nesyri, summoned after overcoming a muscular ailment.

The Andalusian team, unlike the last four games, all of them as a visitor -two from LaLiga and two from the ‘Champions’-, He went out before his fans thrown towards the rival goal, he used both bands and direct play, so that soon, after eight minutes, he found the goal.

Óliver Torres, in his third consecutive game as a starter, a goal was made with a powerful volley to a ball that came from a corner kick from the left and to which it was impossible to respond to the goal Aitor Fernández.

Minutes after 1-0, the Levantine team encountered another setback, the injury of the German central Shkodran Mustafi, who in a turn complained of an adductor and at thirteen minutes he left his post to Róber Pier.

The story of this first half was always in the visiting area, and so on Rafa Mir made only one play to put the second, the fourth in his personal account, but it could be worse for the interests of Levante, because before half an hour Suso Fernández, in another great individual play, was close to the third, although the ball, with the beaten goalkeeper, was repelled by the strain of a pole.

From that possible 3-0, he immediately went to a 2-1 that left the game with another face after José Luis Morales made a blow that slipped through a squad of the local goal, his third of the season.

But The joy was short-lived in the granota team against an opponent who did not give up in his mission to attack and that he achieved 3-1 minutes before the break, from a precise header from the Brazilian center-back Diego Carlos.

The start of the second half, with Bardhi and Malsa already on the field to enhance the Valencian attack, was once again effective for the Andalusian squad, and again with a great goal, now from Munir, but Morales also shortened distances by taking advantage of a bad control of Dmitrovic, a failure that preceded another by Diego Carlos to lead Gonzalo Melero to put the 4-3 with approximately half an hour ahead.

Sevilla, who had received three goals in eight games so far, in one hour of play had scored another three, while Levante, which cost a world to score, had gotten drunk on them at Sánchez-Pizjuán.

The problem for the Levantinists was that every time I dialed shortly after it fit, like the 5-3 of the Brazilian midfielder Fernando Reges who continued a match that did not stop on scoring occasions and in alternatives in the two goals but in which the scoreboard no longer moved.

Incidents: Match of the tenth day of LaLiga Santander played at the Ramón Sánchez-Pizjuán before about 31,000 spectators. The first time that the Sevilla stadium could accommodate one hundred percent of its capacity after the restrictions of the pandemic. In the run-up to the run, Sevilla had an act of recognition with the French central Jules Koundé and the Brazilian central Diegos Carlos, the former for the title with his national team in the League of Nations and the latter for having completed a hundred games in the team Seville.