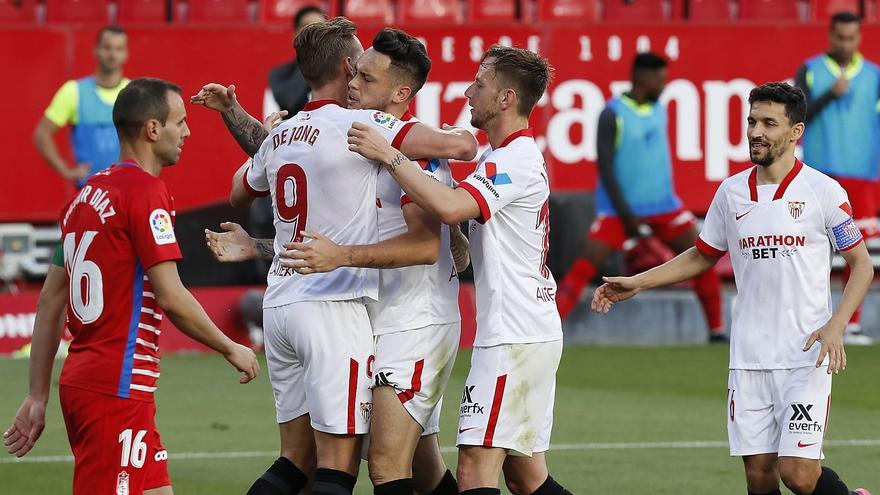 The Sevilla won by 2-1 al Granada and does not give up on his dream for fight for the league title, after being far superior to a rival who is holding back in his aspirations to repeat in Europe and stay three points behind Atlético, with one game less, and one behind Real Madrid and Barcelona, ​​this one also with a pending match.

After a goal in the first quarter of an hour from the Croatian Ivan Rakitic, from a penalty, the sevillistas dominated a Granada who never gave him any option in a match that they always controlled and increased their income with the Argentine’s 2-0 Lucas Ocampos at 53 minutes, then unsuccessfully trimmed by Roberto Soldado, from a penalty, in 90.

With Sevilla in the fight for the title and Granada hurrying their options to repeat a European presence, the local coach, Julen Lopetegui, surprised with the Croatian Rakitic along with the Argentine Papu Gómez in the medullary, by a fixed in the eleven as Joan Jordán, and the Dutch Luuk de Jong up to the detriment of the Moroccan En-Nesyri, author of two goals in the last two days.

At Granada, Diego Martínez, with the last minute loss of the injured Vallejo, opted for a rear of three and two lanes with Víctor Díaz, the Argentine Nehuén Pérez and Carlos Neva as novelties along with Foulquier and Germán; the return of the Frenchman Gonalons to the media with the Venezuelan Yangel Herrera; the Brazilian Kenedy and Antonio Puertas in the bands; and the Colombian Luis Javier Suárez in point.

The clash began with high pressure from Granada, although little by little Sevilla took control and he was far superior to his rival, who was losing gas as the minutes passed.

After warning Papu with a high shot, Argentine Marcos Acuña sent a good long ball to his compatriot Lucas Ocampos, who controlled perfectly and gave back to Papu Gómez, who was knocked down in the area by former Sevilla player Gonalons, a penalty that Rakitic converted to 1-0 about the first quarter of an hour.

From there, the Seville team continued with its dominance and even increased it against an erratic Granada, highly demanded by the pressure and ambitious football of Sevilla, with which was unable to generate any danger in the area of ​​the Moroccan goal Bono.

Lopetegui’s team continued to do their thing, controlling without going through any kind of trouble before a lost and impotent Granada team, which was dominated, with which the Hispanics, with a game of touch and dominance, were able to increase their income in Ecuador of the first half with a header from De Jong that narrowly went wide.

In the resumption, Martínez sought the reaction with the entry of Quini and the Venezuelan Darwin Machís for the central Nehuén and Kenedy, intermittent and did not explode in any of their attempts, but Sevilla was firm and continued to command, without having to face any clear chance of scoring from their rival.

The second half had little history, it continued the same script of full command of the Sevilla team, which, at 8 minutes of this period, increased its income and practically sentenced the crash in a mistake by Granada in a throw-in that reached Papu Gomez, very active and incisive, to give the ball back to Ocampos.

This Argentine connection paid off for Sevilla, as Ocampos, in the large area, shot with his soul and beat Rui Silva to make it 2-0 and to endorse the absolute control of his team against a Granada that tried, but that all his effort went to try to neutralize a Nervionense group that did not give him any option.

No clear occasions for the Granada, which burned its ships with the entrance to the field of Montoro y Soldado by Gonalons and Suárez, and after another veteran, Jorge Molina, by the injured Carlos Neva, the whole of the Nervión neighborhood did not lose control and avoided any dangerous approach from the rojiblancos.

Still, in the final stretch and with the grenadinists overturned To try to shorten distances and turn the game around, Roberto Soldado headed one of the several centers into his team’s area, most of the time desperately, and the ball hit Acuña on the elbow, before which the The referee signaled a penalty after being notified by the VAR.

Made it 2-1 Soldier, in 90, but the locals held out in the four minutes of an extension with more suspense than expected after the referee whistled the end at the third minute and, after being warned that there was one more left, ordered to complete all the time, without endangering it a triumph of great value for a solid Sevilla.