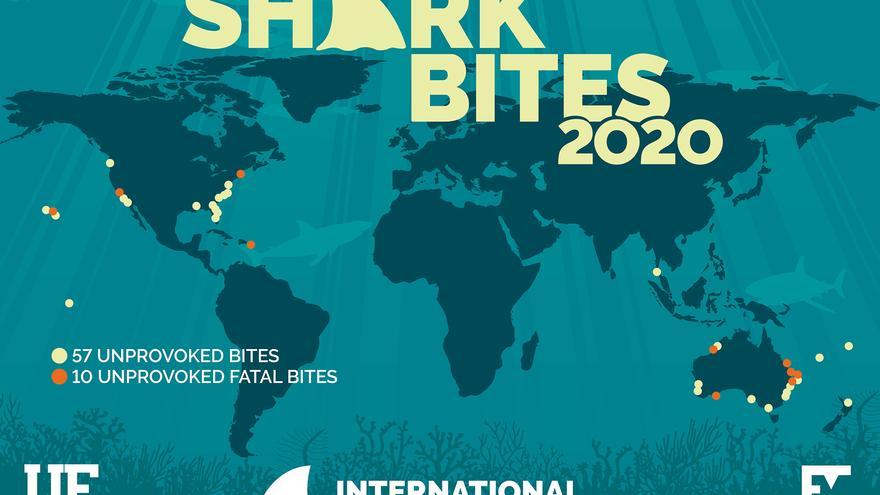 Shark attacks on humans that occur around the world increase considerably during the full Moon, although it is not known why. Lunar electromagnetic signals could explain this behavior.

The full Moon is a phase that occurs when our planet is located between the Sun and the Moon, almost aligned. At this stage the natural satellite of the Earth shines in a special way.

Although the Moon does not have its own light, we see it because it reflects the light of the Sun. At a certain moment of its orbit, the lunar half is looking at our star and it is especially illuminated. We call it the Full Moon.

As the Moon affects the Earth’s tides through cycles that correspond to its phases, historically there has been talk of the moon effect to refer to a supposed relationship, never proven, between the lunar cycle and the physiological changes of living beings, including humans.

The new research adds to the studies that have sought in the past to verify the relationship between lunar cycles and living beings, in this case sharks.

Although the researchers do not attribute a cause and effect relationship between the phases of the moon and the behavior of the sharks, what they have verified is that their attacks on human beings are much more frequent during the full Moon than in other phases of the orbit. of our satellite.

Specifically, they have observed that every time there have been more shark attacks on humans than could be expected, the lunar illumination was 50% higher.

Also that every time there were fewer shark attacks on humans than expected, the lunar illumination was 50% lower.

The researchers also point out that different previous studies have observed behaviors in the animal world that are related to the lunar phases.

However, few studies to date have looked at the connections between lunar phases and shark attacks on humans, the authors of this research point out.

What makes this research important is the abundance of data analyzed, they add.

Their findings are based on a global record of shark attacks compiled over 55 years, between 1960 and 2015, by the International Shark Attack Archive located at the Florida Museum of Natural History at the University of Florida.

Detailed analysis of the numerous shark attacks around the world over the course of several decades revealed a clear correlation between lunar phases and shark attacks on humans, although the reasons remain unknown.

“It’s not a question of more light at night for the sharks to see. Most shark attacks occur during the day. However, the Moon can exert other forces on Earth and its oceans in much more subtle ways,” explains Steve Midway, an associate professor at LSU and a researcher on the project, in a release.

In an article published in Frontiers in Marine Science, the authors clarify that it is established that sharks feel and respond to electromagnetic stimuli.

They explain that the changes in terrestrial geomagnetic activity created by the Moon could be related to the proven ability of sharks to respond to electromagnetic stimuli, either to migrate or reproduce.

And they add: although the lunar phase does not directly influence the aggression or predation of sharks, the lunar electromagnetic signals that trigger migration or the physiology of their reproduction, could hypothetically influence their interactions with humans.

Consequently, they conclude that their findings provide evidence that shark attacks may be related to the phase of the moon, and that this finding could be useful in assessing attack risk and developing recommendations for recreational water activities in the open ocean.

The last three years have marked a steep drop in shark attacks on humans around the world, according to the latest annual summary produced by the University of Florida International Shark Attack File.

Based on long-term trends, the United States leads the world in shark attacks on humans, with 33 incidents, albeit a 19.5% drop from 41 attacks the previous year. Australia follows in the same ranking with 18 incidents, which is a slight increase from the country’s most recent five-year average of 16 attacks per year.

Gavin Naylor, director of the Florida Museum of Natural History’s shark research program, thinks the lower number of deaths in 2020 is likely an anomaly.

It’s unclear whether COVID-19-induced lockdowns and a slow year for tourism might have contributed to an unusually low number of shark attacks, or whether the drop reflects the difficulty of obtaining data during a pandemic.