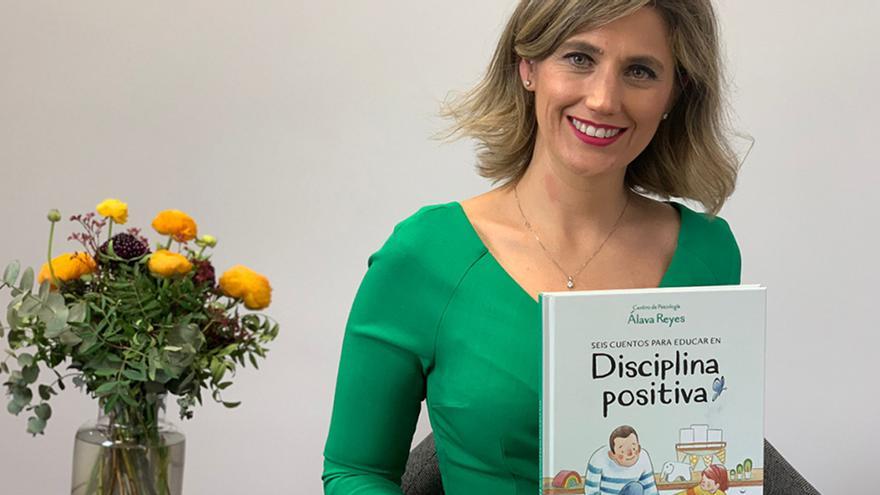 “Six stories to educate in positive discipline” is the latest book published by the Álava Reyes Psychology Center, written by one of its professionals, the psychologist Silvia Álava.

Six stories starring trapeze artists, sheep, pirates and magic stones run through the pages of this book in order to teach the smallest concepts such as routines, belonging, persistence, forgiveness, anger or self-esteem in a simple way .

But, in addition, it is a manual for us, mothers and fathers, since it contains a practical guide to teach us to apply this positive discipline from home to get our children to comply with rules, ask for forgiveness, manage their emotions, etc.

Silvia, six stories for children, but also explanations for parents that can help us in the upbringing and education of our children … A book that is the perfect tool for the whole family …

Exactly, it is that the change is in us, the adults. When we are educating, the parents are responsible. Even when we are talking about the adolescent, the change has to start with us. It is the adult who has to act differently for the child to act differently. When I work with families, I ask them to make a record, not only of what their child does or says, but of what they say. And the key, most of the time, is in our response.

The tool you propose in this book to relate to our children is positive discipline. When we talk about educating positively, there are many people who relate it to the fact of not setting rules and limits on children. Why is this happening?

It is true that there is a misunderstanding and we confuse positive discipline with the absence of rules and limits, but nothing could be further from the truth. When we talk about positive discipline, of course there are rules and limits, what happens is that the rules and limits have been explained and anticipated. That is to say, the norms attend to a logic and a reasoning, they are not put under the scheme of “here I command”. We cannot forget that we do not set the rules and limits for children to obey us just for the sake of it, but for boys and girls to activate self-control. For this reason, the rules must be explained, anticipated, stated positively and adapted to the age of the children. On the other hand, I would like to remove from the heads of some parents that norms and limits cancel out the personality of our children. No, not at all, they give them security, confidence and help them acquire self-control.

How would you define positive discipline?

Educate from respect. Taking into account that the child must respect the adults, but we also the child. We take into account your opinion, your emotions, your needs. Perhaps something differential when we talk about positive discipline is that we do not punish. Because what is the punishment? It is a sanction. In positive discipline there is no punishment, there are consequences. The consequences are logical (we have anticipated them previously, the child knows what is going to happen) and they have to do with the behavior. That is, if your child does not put the clothes in the laundry basket, a punishment would be not to let him go to the movies on Saturday with his friends, something that has nothing to do with his behavior. The consequence would be that we do not wash his clothes because they are not in the basket. In this way, we promote the autonomy of our children, and that they learn to do things for themselves.

In fact, neuroscience tells us that you don’t have to feel bad to learn …

It is not that you do not have to feel bad to learn, it is that neuroscience has shown that pleasant emotions favor learning, and unpleasant ones hinder it. What children need to learn is time, calm, patience, and repetition. Therefore, we are going to educate everyone feeling well, without the yelling, without the threat and punishment. What will bring us a much more beneficial result for the child, but also for us, that we will feel better.

When we talk about positive discipline, there are many mothers who argue that it does not work for them because if they do not punish them, their son ignores them …

Be careful, the children have learned that until we tell them things five times, they don’t have to listen to us. But, in addition, they know that from the first time we tell them to the fifth time, we pay a lot of attention to them. And yet, if you get it right the first time, no one looks at you. So the child, who wants your attention, doesn’t do it until the fifth year. Let’s try to do the opposite, when you are obeying, I pay attention to you, I stay by your side. It is also very important to warn of what is going to happen. For example, I know that my son will not want to stop playing to go to bathe, because I will tell him. “Hey, in 5 minutes we’re going to pick up the toys.” And, instead of punishing, encourage: “Good, because we are going to do it very quickly and we will have plenty of time to read a story together.”

Another recurring phrase is usually this: “It is very good to reason with the child, but it is difficult to make him see reason.”

Children are capable of reasoning perfectly, but the key is when we try to do it. In the middle of a tantrum nobody can reason, let’s do it later, calmly. We talk about it later, explaining to them in language that they understand why they have to shower and stop playing. And, in addition, we do it respecting their emotion: “Honey, I understand perfectly that you want to continue playing, it is logical, that’s why you feel angry, but you know that every day you have to spend a little time in the bathroom.”

Does positive discipline see education as a long-term process and authoritarianism wants the result now?

It could be a good definition. Sometimes we want to get things done now, it is logical, we need the result today. What happens is that the “because I said so” does not usually work. Do mothers and fathers want our children to brush their teeth because we tell them to, or do we want them to learn why they have to brush their teeth and do it always, regardless of who we are in front of? I think the latter. It is about understanding the why of things at all times. And you have to explain it to them with your language: you have to brush your teeth because if the bugs don’t come, for example.

It has been shown that children whose parents are more authoritarian figures can function very well in school, at the grade level, but they can be less critical and, on an emotional level, it will be more difficult for them to recognize their emotions and those of others. Overprotection doesn’t help either. The consequences would be lack of autonomy, security …

Educating with positive discipline we educate in a more democratic way, seeking consensus, and we get safe, autonomous children, capable of recognizing and regulating their emotions.