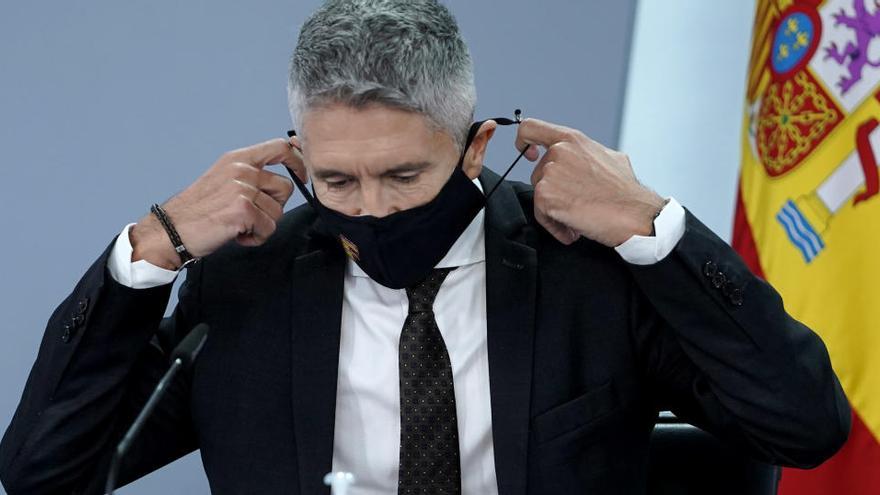 The Council of Ministers, in its meeting this Tuesday, has approved a proposal from the Ministry of the Interior toIncrease from 3 to 6 the points to be deducted for driving while holding devices of mobile telephony and raise from 3 to 4 those who are detracted for not using the seat belt, child restraint systems, helmet and other protection elements.

In addition, it explicitly incorporates the misuse of these elements as a cause of sanction (for example, wearing a safety helmet or seat belt without fastening).

As reported by the Minister of the Interior, Fernando Grande-Marlaska, in the press conference after the meeting of the Council of Ministers, one of the measures included in a package of legal reforms. Specifically, they are included in the draft law that reforms the Consolidated Text of the Law on Traffic, Circulation of Motor Vehicles and Road Safety regarding points license.

Thus, it is typified as a serious offense “carry in the vehicle” radar or cinemometer detection mechanisms, which will mean the penalty of 500 euros and the loss of 3 points; Y the possibility that passenger cars and motorcycles can exceed 20 kilometers per hour is eliminated (km / h) speed limits on conventional roads when passing other vehicles.

In another order of things, the possibility of recovering 2 points for taking the safe driving courses certified by the General Directorate of Traffic. “A ministerial order will develop the necessary requirements and the conditions that must be met,” the DGT has detailed.

Further, the reform unifies in two years the period that will have to pass without committing infractions to recover the initial balance of points, a period that now varies depending on the seriousness of the offense committed.

Regarding the driving tests, a new very serious offense is included, commit fraud using unauthorized intercom devices. The penalty will be 500 euros and a penalty of 6 months without being able to attend the exam.

At the same time, it provides’ online ‘access to the Driver registry for companies that transport people and goods so that they can find out if their workers’ driving license is valid or not. It will only be reported in red or green depending on whether it is current or not.

The Government has indicated that the draft, which has already passed the consultation and public information process, has also been reported by the Higher Council for Traffic, Road Safety and Sustainable Mobility; the Office of Coordination and Regulatory Quality; the Spanish Agency for Data Protection, and the current Ministry of Transport, Mobility and Urban Agenda.

After its approval in the first round by the Council of Ministers, the draft must now be informed by the Ministries of Finance, Economic Affairs and Digital Transformation, Labor and Social Economy and Territorial Policy and Public Function.

On the other hand, the Council of Ministers has approved a royal decree that modifies both the General Traffic Regulation and the General Vehicle Regulation in the matter of urban traffic.

Thus the general speed limits on urban roads are redefined (article 50) based on their different classification: on roads with a single carriageway and pavement platform, the limit will be 20 km / h; on single lane roads per direction of traffic, 30 km / h; and on roads with two or more lanes per traffic direction, it will continue to be 50 km / h.

The Executive has reported that These limits will not apply until six months after their publication in the Official State Gazette, so that citizens know them properly and so that public administrations have sufficient time to adapt the signage.

The scooters are regulated

The Royal Decree also regulates personal mobility vehicles (scooters), defined as vehicles with one or more wheels equipped with a single seat and powered exclusively by electric motors that can provide the vehicle with a maximum speed between 6 and 25 km / h.

This definition excludes vehicles for people with reduced mobility, and implies that their circulation on sidewalks and pedestrian areas is prohibited. They will have to comply with the traffic regulations like the rest of the vehicles – submit to breathalyzer tests, do not use headphones, etc. – and their circulation on interurban roads, crossings, highways and highways that pass within the town or in urban tunnels is also prohibited. .

In order to circulate, they must have the corresponding certificate of circulation that certifies that they comply with the technical requirements contemplated in the manual of characteristics that will be approved by resolution of the General Director of Traffic.

In this case, the minimum age required to drive trucks is reduced from 21 to 18 years old, having passed the 280-hour Certificate of Professional Aptitude (CAP); and the minimum age to drive coaches is 18 years, but only without passengers and within a maximum radius of 50 km. It will only be from the age of 21 and with the CAP of 280 hours when they will be able to carry passengers.

At the same time, the weight of the vans is increased from 3,500 kg to 4,250 kg that can be driven in national territory with the B permit for the transport of goods, only when the increase in mass is due to the new propulsion systems.

In relation to the training tests to obtain the driving license, the mandatory protective equipment that the applicants have to wear in the skills and circulation tests to obtain the motorcycle licenses is specified, and the possibility of that, in certain cases and after an individualized medical and mechanical assessment, access to truck and bus driving licenses for people with problems associated with the locomotor system can be authorized.

The Government has detailed that the changes in the Traffic and Vehicle Regulations will come into effect on January 2, 2021. However, the modification of speeds in urban areas will take effect six months after its publication in the BOE.

Finally, the modifications relating to the Drivers Regulations will come into force the day after the publication of the Royal Decree in the BOE.