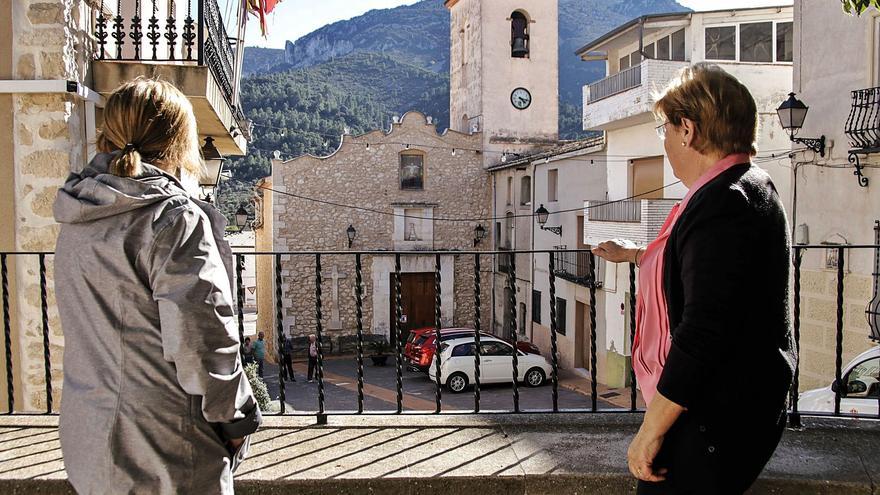 A person walks through Sella, above, and two of the eight urban centers of the Vall de Gallinera. | D. REVENGA / J. RUZ

The rigidity of the criteria when applying aid policies against depopulation has jumped into the public sphere after the reflection that the mayor of Bolulla, the popular Adrián Martínez, shared a few days ago on social networks. The first mayor questioned that the municipality, which has 420 inhabitants, does not fall into the group of localities considered at risk of depopulation, despite the fact that the average age of its neighbors is high and keeping the school open is an effort continuous. But in addition, he denounced that this non-inclusion among the municipalities at risk of depopulation prevents access to certain aid.

The mayor of Quatretondeta contemplates the urban helmet of the municipality. | JUANI RUZ

“Is it necessary for a municipality to sink for the administration to start offering certain services or subsidies?” the councilor of Bolulla. Other mayors and councilors are not so critical, but at the same time they understand these complaints and emphasize the bureaucratic difficulties in accessing aid, as well as the failure to take into account the special conditions of employment. the towns with little population and, therefore, few resources, to facilitate management. And also, that the staff shortage complicates it even more.

Small municipalities warn of the bureaucracy to access aid

The mayor of Fageca, the socialist Ismael Vidal, points out that “the bureaucracy slows down everything, and we have it more difficult because we have to do everything with just one person.” In addition, he criticizes the deadlines that public aid sometimes has: “We find late resolutions by the administration, and then you have to hurry to justify the subsidy”, for issues such as carrying out cultural activities or social revitalization. In his opinion, these questions should be simplified, because sometimes “you find yourself with a sterile bureaucracy, which is demoralizing.”

Vidal alludes to examples such as that “it cannot be that for a grant of 250 euros they ask you for nine papers”, or that the aid system is very rigid, “with everything marked and scheduled.” “They don’t have to tell me what needs we have,” he adds. And it also regrets that there is no special attention to promote the launch of entrepreneurial projects quickly. Appointment the case of an initiative to install a cheese factory, which, as the municipality lacks a General Urban Plan, is being extended over time. “If it is already difficult to undertake, you also have these handicaps,” he insists. For this reason, he believes that they should “simplify processes and shorten times.” And it also refers to the convenience of a “differentiated tax system” that takes into account the particularities of small municipalities.

The rigidity of criteria When it comes to planning aid, this is also an aspect pointed out by the first mayor of Quatretondeta, Francisco Picazo, from Compromís. “They take out a series of subsidies and you have to adapt to that,” he criticizes. “It should be the other way around,” he considers, so that the municipalities could allocate that money to projects that are necessary for them, something that would also mean “savings.” It also affects the difficulty of carrying out the corresponding procedures due to the shortage of personnel. In this case, the City Council has a single administrative officer, whose workload makes it very difficult to prepare applications for aid.

For this reason, Picazo especially values ​​the figure of local development agents (ADL) that the Avant Agenda against the depopulation of the Generalitat has made available to the municipalities. He points out that they are professionals “very efficient, who are by our side and are very useful” precisely for access to subsidy lines. Thus, they represent a discharge for the municipal administrative, with the addition that they have a good knowledge of the system and the bureaucracy to follow. In general terms, the first mayor of Quatretondeta also shows a “good impression” with the operation of the Agenda Avant.

“They take out a series of subsidies and you have to conform to that, when it would be more efficient the other way around”

The problem with the aid may not only be the difficulties in requesting it, but also the delay in collecting it. This is pointed out by the mayor of Benifato, the popular David Blanes, who warns that in some programs the municipality must pay the costs until it receives the aid, and that is often “very difficult to bear.” Therefore, it considers that “it would be good if the subsidies advanced”, with the requirement of “having to justify them later». It also highlights that there are grants that “because of our budget, we cannot ask for”, if they do not include 100% or almost of the total investment, due to the same shortage of cash liquidity.

Blanes agrees that “more and more papers are being requested, and the deadlines are tighter, which complicates the application. “With more time, it could be done more easily” even with few staff. In his opinion, “in the administrations there is little representation of the small municipalities”, and that often makes their reality and their needs unknown with sufficient precision. Even so, he emphasizes that “every stone makes a wall”, and that any contribution is always well received, such as the 10,067 euros that have corresponded to Benifato in the Generalitat’s Cooperation Fund against depopulation. The mayor believes that the Consell “listens” to the municipalities in this regard. In total, as this newspaper published on Friday, 30 municipalities of the province have benefited from 480,000 euros.

This aid has not reached Sella, whose population has been stable at around 580 people for some years. Pablo Giménez, councilor of the government team for an independent local formation, nevertheless appreciates the initiative, “because it is the first time that it is taken into account” and “the future of large areas of the Community is compromised.” Of course, it also corroborates that “everything that comes from Valencia has an excessive bureaucracy”, so “in the end it’s crazy.”

Gimenez Remember, in this regard, that in these municipalities “there are hardly any staff”, and politicians are “volunteers”, who often do not perform well in technical matters. In his opinion, “a solution could be to set up a kind of specific office” for small municipalities, “that would allow them to be much more agile”, and that would have “technicians who knew the reality of the towns, because sensitivity is very important».

Attention to the particularities of each municipality

Knowledge of the specific characteristics of the municipalities by the higher administrations is also a basic aspect, as Maria Josep Puig, councilor of the Vall de Gallinera points out. The municipality has 527 neighbors, but spread over eight towns. For this reason, “if we ask for the same subsidy twice, it is not a whim; There is not one doctor’s office here, but five. ‘ He reiterates that “there are many bureaucratic difficulties, and we do not have technical personnel.” She is satisfied with the depopulation aid, since “this year we received 25,000 euros, and last year we were able to buy the land to build the new school.” However, he believes that work could be done to give smaller municipalities “more financing options.”