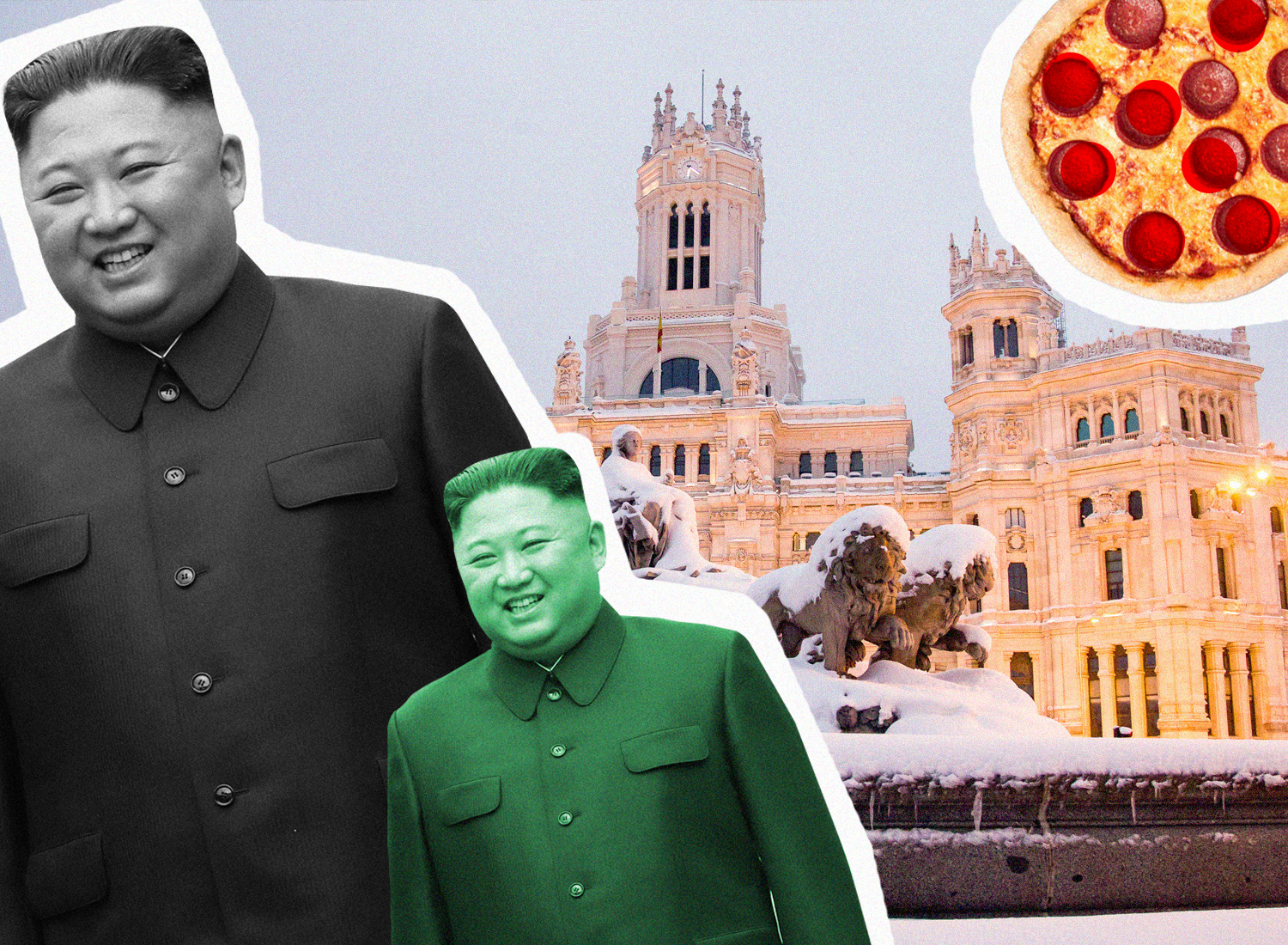 Like an iceberg, below the visible state there is a deep state (Deep State) that, hidden from the eyes of the citizen, holds power. The members of that deep State are worshipers of Satan and, among their thousand evils, is to maintain networks of pedophilia or drink the blood of babies (thinking that this way they will achieve eternal youth). It is a conspiracy in which members of the American Democratic Party like Hillary Clinton or Barack Obama, Hollywood stars like Tom Hanks or millionaires like Bill Gates or George Soros are implicated. Even Pope Francis. But there is a savior who is going to destroy the deep state and break our chains: Donald Trump.

This sinister conspiracy theory, known as QAnon and linked to the far right, seems delusional, but it has more and more followers. Although it makes us laugh, perhaps it should scare us: the FBI has already labeled it a threat of national terrorism. Some of the people who recently stormed the US Capitol were adherents of these beliefs, for example, the one who was the star of the event, the man in disguise known as the Yellowstone Wolf, with the silhouette of Jamiroquai and the face of Axl Rose, who has a channel of YouTube dedicated to spreading these theories.

“Every conspiracy construct is not innocuous, on the contrary: as soon as it becomes an ideology of the State or of terrorist gangs or fanatical groups, be they religious and / or nationalist, they lead to massacres, killings, collective suicides and even genocide”, explains Alejandro M. Gallo, author of the recent and monumental Critique of Paranoid Reason (Kingdom of Cordelia). “The examples are multiple throughout history and the QAnon movement is no exception.” Some specialists consider QAnon as an emerging religious movement that takes Trump as its saving messiah. As in the cults, the members come to suffer a certain disconnection with reality and even with their loved ones outside.

Trump himself has been ambiguous when talking about QAnon, without actually denying it, probably so as not to lose his electoral support and his propaganda power. “I don’t know much about the movement, other than that I understand that they like me a lot, which I appreciate,” he said in an interview. Asked about the belief that he himself was ridding the world of a sect of satanic pedophiles, he replied: “Is that supposed to be a good or bad thing? If I can help save the world from trouble, I am willing to do so. ” QAnon also has followers within the Republican Party: Marjorie Taylor Greene, a supporter of this theory, won a seat in Congress for the State of Georgia in 2020.

“QAnon arises from hatred of the political left and from the search for a messianic leader, in this case Donald Trump,” observes journalist Marc Amorós, author of Why does fake news screw up our lives? (Editorial Lid). And he also observes several teachings of this conspiracy theory: “It shows us the capacity of false narratives as social glue, as a way to bring together many and very diverse people around an idea or a leader,” says the expert. In addition, it shows the power of tribalism, how the guilt and the possible consequences of the conspiracy theory dissolve when being part of a collective or a community. Finally, it also shows the danger of being part of an opinion or information bubble. “In them the same ideas are continuously shared and that inevitably leads to a polarization of the group and the individual, both in thought and in actions,” says Amorós. “Individuals are compelled to show more and more their adherence to the ideas of the group.”

The conspiracy problem and the fake news that spread over the Internet begins to splash very notoriously the world of flesh and blood, because the world online and offline they are already the same. Belief spreads across the planet. In addition, it is easy to adapt to each territory: in Germany, where it is growing strongly, Angela Merkel is said to be in league with him. Deep State. In France, Emmanuel Macron is the puppet of the pedophile conspiracy. Etc. Evil, believe conspiranoids trained in online forums and on YouTube, surrounds the planet like an octopus.

QAnon is a name made up of Q and Anonymous. Q is the code name of the enigmatic prophet of this movement, someone who, supposedly, is part of the heart of the Donald Trump administration and who, as a conspiracy builder, leaves crumbs of information on the Internet to be decrypted by his followers. Thus they come to revelation, similar to the hermetic messages of the Delphic oracle, which were to be interpreted by chosen people. “They look for clues, clues, messages, signs that only the enlightened can distinguish in order to find the conspiracy,” Gallo writes. “The followers are fed the carrot and the stick, making them think they are about to discover something very valuable, in a kind of epiphany.”

It all started in 2017 in Internet forums with enormous activity in the United States such as 4Chan or 8Chan (without being exactly the same, they are a kind of equivalent to Forocoches there). A year earlier, in 2016, during the elections, a preliminary version, called pizzagate, which also described a pedophile ring in the Democratic Party, linked to a pizzeria in Washington DC called Comet Ping Pong, where, supposedly, satanic abuses were carried out. A man with a shotgun came to attack this pizzeria when he went to investigate the facts. There were no injuries, but the conspiranoid, aged 28, he was sentenced to four years in prison. He surrendered when he found no secret rooms in the pizzeria or a trace of satanic rituals. Just pasta, tomato and mozzarella.

The QAnon theory is so broad that it can function as a conspiracy metatheory, a tree with many branches, or an umbrella under which many other theories are sheltered, for example, the aforementioned pizzagate or all kinds of denials of the pandemic. In fact, due to the emergence of the coronavirus and the subsequent lockdown, QAnon’s adherents grew dramatically: people wanted answers and had time at home to search the depths of the Internet for them. After the last great snowfall, without going any further, there are voices on Twitter that encourage burning a piece of snow to check that it is not snow, but plastic, and the storm Filomena it is also a conspiracy.

Among other ramifications of QAnon are beliefs such as that John Fitzgerald Kennedy is alive, that the Rothschild family of bankers dominate the financial world or that the furniture store WayFair sells children on its website, according to Gallo. Or the one that is weirder: that North Korean President Kim Jong-un has been placed by the CIA in his post and released in 2018 by Trump, who has placed a double in his place. According to these conspiranoids, we live in the time of the “great awakening”, which happens before Trump unleashes the “storm” and locks up the villains of the deep state (Clinton, Obama …) in Guantánamo.

A peculiarity of QAnon, according to report researchers Muirhead and Rosenblum in The New Yorker, is that, while the classic conspiracy theories try to explain something (the Kennedy assassination or the arrival on the Moon), QAnon is characterized by his lack of interest in the explanation: “As with the non-existent trafficking network As children coming out of the non-existent basement, there is often nothing to explain: the new conspiracy sometimes seems to come out of nowhere. Another peculiarity: if it is frequent that the conspiranoias are fed by groups opposed to power, QAnon was born from the Trumpist sectors, when Trump occupied the White House (Trump himself began his political career spreading hoaxes about the real identity or birthplace of Barack Obama). The aforementioned authors point out that we are facing a “new conspiracy”.

Why do we believe stupid?

“Conspiracy thinking it has benefits for individuals: it gives us a sense of control, that the world has an explanation ”, says psychologist Ramón Nogueras, author of the book Why do we believe in shit? (Kailas). “It is very difficult for us to accept that we do not understand things: many times we prefer a bad explanation than uncertainty.” And we believe that the big problems must have big explanations: it is not possible that the Kennedy assassination was the work of a moron who acted alone: ​​there must be something more powerful behind it.

In a world that is advancing faster and faster, that is increasingly difficult to understand, in which certainties disappear under our feet, conspiracies like QAnon offer their followers a firm reality to cling to. In addition, escaping from the grayness of everyday life, it makes them feel special, “awake”, as in a spy movie, possessors of a secret that is denied to the majority, which they consider sheep, a victim of the evil deep state.

“People conspiranoids do not have any mental illness, but they do have certain traits that make them inclined to believe: they are good at detecting patterns, they perceive intentions even where there are none, they are distrustful and have a low level of analytical reasoning ”, points out Nogueras. It is easier for a person with a low level of education to fall into these beliefs, but so can people with university degrees and doctorates. Being part of a community that relates and supports each other also makes these environments attractive.

Conspiracy theories go from deluded minds to facts and pose dangers. For this reason, it is important to foster a critical spirit, make people understand that there are reliable sources of information and others that are not, learn to reflect before sharing information. We live in times of infodemia, that is, an avalanche of information where the true and the false, the relevant and the garbage are mixed. “Having access to a large amount of information, as we have now, does not imply that we have a better capacity to filter it,” says Nogueras, who is in favor of digital platforms placing more emphasis on verifying the content that is disseminated. “It’s important to tackle these theories at the source,” he says. It is also important, especially for the media, not to give a voice to the conspiracy, not even to discredit or make them the object of jokes. That reinforces their beliefs and their community. It apparently fulfills the prophecy that there is a conspiracy against them.

QAnon talks about conspiracies that don’t exist, but he also talks about the dangers of unfiltered communication over the Internet, the lack of references for the human being, the need for the community in individualistic times, the undesirable effects of political polarization, of manipulation of the masses, of how easy it is to reach a dystopian future.