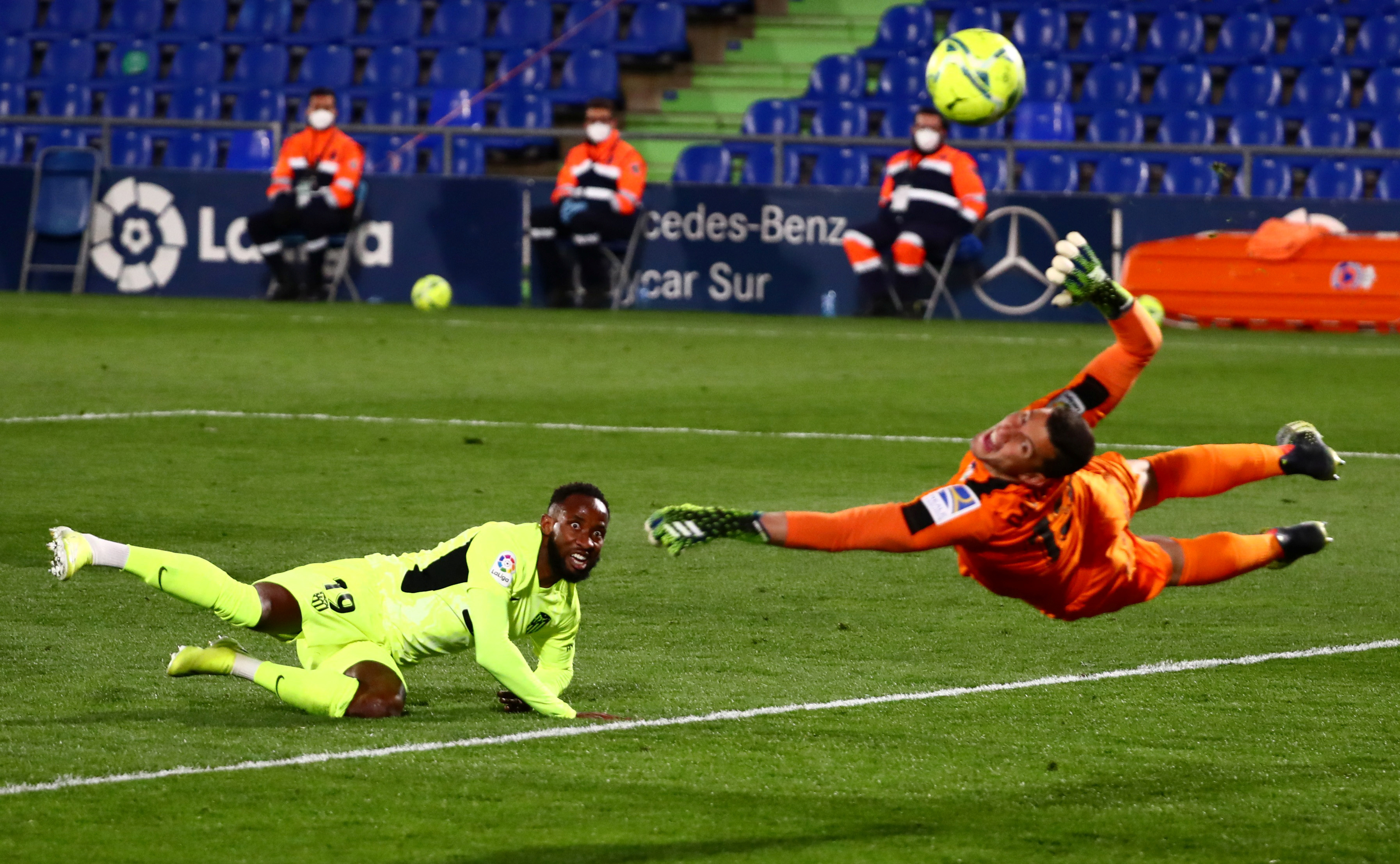 Embedded in the goal of Soria, heroic all night, Atlético left Getafe blocked. With a draw that gives life to Madrid, located at six points, and waiting to know if on Monday he feels the breath on the back of Barcelona’s neck that, if they beat Huesca, would remain four points behind. Simeone’s team paid a first half in which, except for the start, he fell into the trap of Getafe’s stuck football. In the second act he launched a final charge that gave him half a dozen occasions that he did not specify before a capital Soria. The local goal was the symbol of the resistance of his team to lose a game that played with ten in the last twenty minutes for another last inning of Nyom laps.

Atlético’s departure was imperial, aware that each game begins to nominate the future champion. At one stroke he generated three corner kicks and a lateral foul that cornered Getafe. At the beginning, the leader seemed to find a solution to Bordalás’s cumbersome defensive network with Correa and Llorente playing on the inside. The Argentine forward leaked a ball to Carrasco that the Belgian crossed so that Soria began to proclaim that the night was going to be his.

It took Getafe to impose its football-friction. And when he succeeded, that squared game emerged where only something happens on the blackboards. Where each goalkeeper’s serve looks for a hyper-populated area of ​​specialists in combing and scraping second plays. No formalities. The long kick of the goalkeepers or center-backs as the brains of a game in which the midfielders paint little or nothing with the ball. Soccer reduced to mere positioning and the strange feeling that it is another sport in which you play with everything except your foot. A substitute in which it matters more to jump, head and see what happens. And the tactical lack as a corrective and paralyzing factor of continuity. Atlético was abducted by that simplistic zero risk recipe. All the verve he showed in his frenzied outburst was reduced. Drowned and without precision to link play in the last meters. Imprisoned by the incorruptible two lines of four of Getafe. After the failed revolution he tried with Kubo and Aleñá, Bordalás has resumed its more stony version. Risking, risked with advance pressure and little else. That context reduced Cucurella, Aleñá, Cucho and Unal to the fight for impossible balls. Faced with that rough game that occurred in the first forty-five minutes, Simeone decided to operate removing forage. He left Saúl sitting in the stands and João Félix entered. The Portuguese assumed that the meeting asked for more ball and less caroms. He was more of an interior than a playmaker. He managed to get Atlético to start running the ball more in the opposite field.

The leader’s step forward also meant a liberation for the Getafe contras. For a few minutes, Bordalás’s team made Simeone’s team doubt. A couple of bad deliveries at the ball exit led to Oblak having to intervene with shots from Unal and Aleñá. Atlético recovered the government as soon as they secured more passes. João Félix scored with a header, but Llorente put the ball past the baseline by half a span. Bordalás already saw clear that he only had resistance left and replaced the injured Cucho Hernández with Damián Suárez to shield the right with the double side. Simeone had put in more dynamite with a triple change that included Lodi, Lemar and Dembélé. Harassment began that was redoubled when Nyom again had strength to go for a ball and stepped on Lodi’s ankle. The referee, warned by the VAR, only had a glance over at the screen to change the initial yellow for a direct red.

From there, the leading role was already for Soria. The goal endured a volley of chances with miraculous saves. One-handed and rectifying he responded to a volley from Dembélé. João Felix and Lodi also tried it. In a corner, Getafe could be seen ahead if the assistant had appreciated that Dembélé, in his attempt to clear, hit Maksimovic’s leg.

Erected as the hero of his team, Soria was also lucky in a subtle parable that was stamped on the stick. Dembélé had the last chance in a header that just went away.