wall street stocks ended a volatile week with a sour tone as investors weighed escalating geopolitical tensions at the border of Russia and Ukraine. U.S. President Joe Biden warned about an imminent Russian attack after reports showed increased outbreaks of violence and ceasefire violations in the area. he saidon Friday that Russia may attack multiple Ukrainian cities beyond the capital of Kyiv. Gold prices rally alongside crude oil, both of which are highly sensitive to geopolitical risks. Stocks pulled back alongside Bitcoin, underscoring anti-risk sentiment as the political skies remain far from clear.

lingering geopolitical unrest and fears about the Fed tightening monetary policy may continue to suppress risk assets in the near term. this friday’s core PCE price index – the Fed’s key inflation gauge – will be in the spotlight. The reading is expected to hit a fresh four-decade high of 5.1% in January, up from December’s print of 4.9%. An overshooting number may further strengthen the Fed’s hawkish stance and accelerate the expected pace of rate hikes. Against this backdrop, stocks may be put under pressure as their intrinsic value is reduced when future cashflows are discounted at higher baseline rates of return.

on the earnings front, about 84% of the S&P 500 companies have reported results so far, among which 77% have beaten market expectations with an average earnings surprise of 8.5%. The blended earnings growth rate for those companies is 30.9%on–year, marking the fourth straight quarter of earnings growth above 30%, according to Factset. It is worth noting that nearly three quarters of companies have highlighted inflation during their earnings calls, underscoring rising price levels that are having an outsized impact to their margins and operations.

US CPI vs. Fed Target Rate

APAC markets look set to kick off the week on the back foot following a sour lead from Wall Street. Futures in Japan, Australia, Hong Kong, South Korea, Taiwan, Singapore, India and Indonesia are all poised to open in the red. Those in mainland China, Malaysia and Thailand are in the green. US markets are shut on Monday for the Presidents’ Day holiday, undermining trading activity due to fewer market participants.

Hong Kong’s Hang Seng Index (HSI) plunged late Friday following a regulator’s call for meituan – China’s largest food delivery platform – to cut fees they charge restaurants. Meituan’s share price plunged 15%, pulling the HSI and the Hang Seng Tech Index (HSTECH) down by 1.9% and 3.2% respectively. This shows that policymakers may not loosen their grip over China’s Big Tech firms any time soon, defying speculation that authorities may ease control over them to cushion the slowing economy.

HSBC and Alibaba will report earnings on 22na and 24th Feb respectively and may have an outsized impact on HSI and HSTECH indices.

For the week ahead, Tuesday’s US manufacturing PMI as well as Wednesday’s RBNZ rate decision and press conference dominate the economic docket alongside Friday’s US core PCE price index. Find out more from the DailyFX calendar. 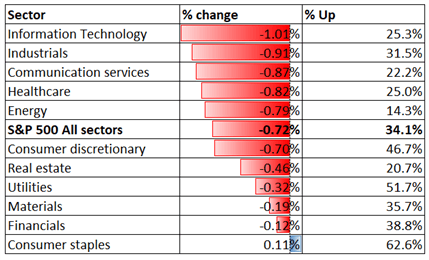 The S&P 500 Index may have entered a meaningful correction after breaching below an “Ascending Channel” as highlighted on the chart below. Prices have likely formed a “Double Top” chart pattern last week, hinting at further downside potential with an eye on 4,300 for support.Breaching below 4,300 will likely expose the next support level of 4,200. The MACD indicator formed a bearish crossover beneath the neutral midpoint, suggesting that selling pressure is prevailing. 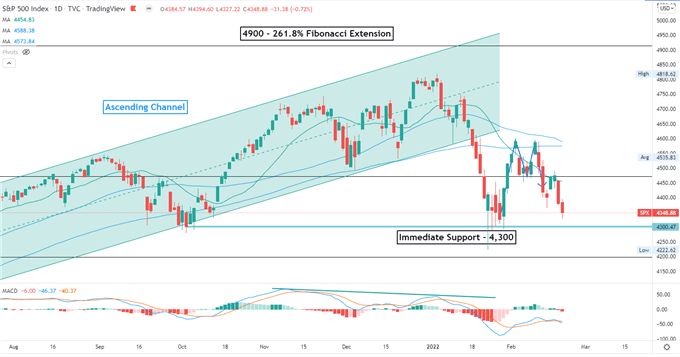 The Nikkei 225 index breached below a “Symmetrical Triangle” pattern and thus opened the door for further downside potential. Prices are consolidating near a key support level of 26,900, but the overall trend remains bearish-biased. The lower trendline of the “Symmetrical Triangle” has now become an immediate resistance. The MACD indicator is trending higher beneath the neutral midpoint, suggesting that buying pressure may be building. 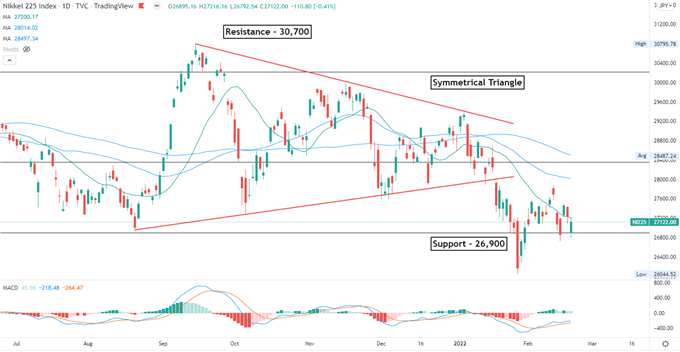 The ASX 200 index has rebounded after a meaningful correction in January. Prices are challenging the 61.8% Fibonacci retracement – ​​a key resistance level. Breaching this level will likely intensify buying pressure and open the door for further upside potential with an eye on 7,435. The MACD indicator is flattening beneath the neutral midpoint, suggesting that selling pressure may be building. 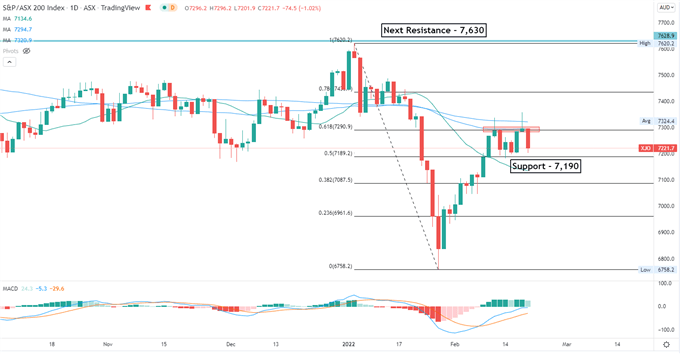 To contact Margaret, use the Comments section below or @margaretjy on Twitterr