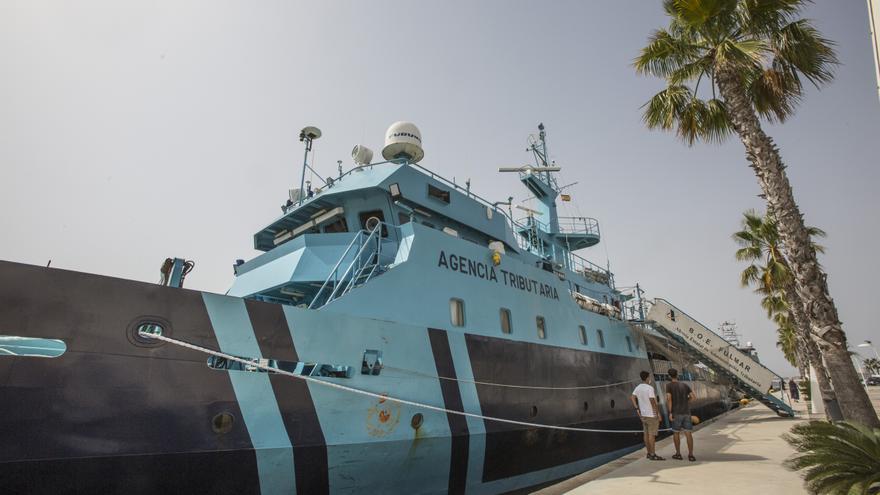 The crew poses in front of the Tax Agency ship. | PILAR CORTÉS

Since 2016, the customs services of both countries have been carrying out this joint air-naval operation each year between the Deputy Regional Directorate of Customs Surveillance of the Spanish Tax Agency and the General Directorate of the Coast Guard Customs of Marseille. Only on two occasions has it not been possible: A technical breakdown of a patrol car in 2018 and the pandemic last year. Operation Pascal 2021 has been developed from July 9 to 23. The special operations ship Fulmar of the Tax Agency and the French patrol boat Jean-Francois Deniau They have been in charge of monitoring the waters of the Mediterranean with the support of aerial means, which were in charge of locating suspicious vessels. The patrol boats departed on the 9th in the waters of the Mallorca channel and on July 23 they reached the Alicante port

Joint efforts have focused especially on the area of ​​the Strait of Gibraltar and the Spanish Levant to face the growing activity of drug networks that use fast boats to transport hashish from North Africa destined for the Spanish Levant and the border area with France.

The more than four tons of hashish seized, figures that those responsible for the operation consider a great “success”, come mainly from three collisions on the high seas. On July 20, 2,880 kilos of hashish were seized on the Luna vessel; on the 18th, in “El Chuncho”, 112 kilos; and on the 16th the “White Shark Umi”, weighing 87 kilos. In addition, the aerial surveillance allowed 76 sightings of semi-rigid boats loaded with several bales on board. Between all these services, they add an additional 1.1 tons of hashish, which the crew of the narcolanchas tried to get rid of by throwing them into the sea. Other services have consisted of locating vessels that supply fuel to these narco-boats, as well as different boats with immigrants on board.

The Deputy Delegate of the Government in Alicante, Araceli Poblador; the deputy director of Customs Surveillance, Angel Delgado; the director of the Coast Guard Service of French Customs in the Mediterranean, Max Ballarin; and the head of International Relations of the General Directorate of Customs of France, Marc Dargorn. After two weeks of mission, the crews of the two ships have received congratulations from their superiors, who have committed to maintaining this mission in the coming years, where the objective is not only the fight against drug trafficking, but also the experience of that cooperation. in the fight against criminal networks, Delgado explained

For his part, Max Ballarin stressed that Spain is France’s main customs partner and that the need to cooperate between the two countries is that “the drug that reaches France passes through Spanish territory.” Marc Dargorn expressed the condolences of the French government for the death of the Spanish agent at the beginning of the mission. Three people have died since this joint service was launched.