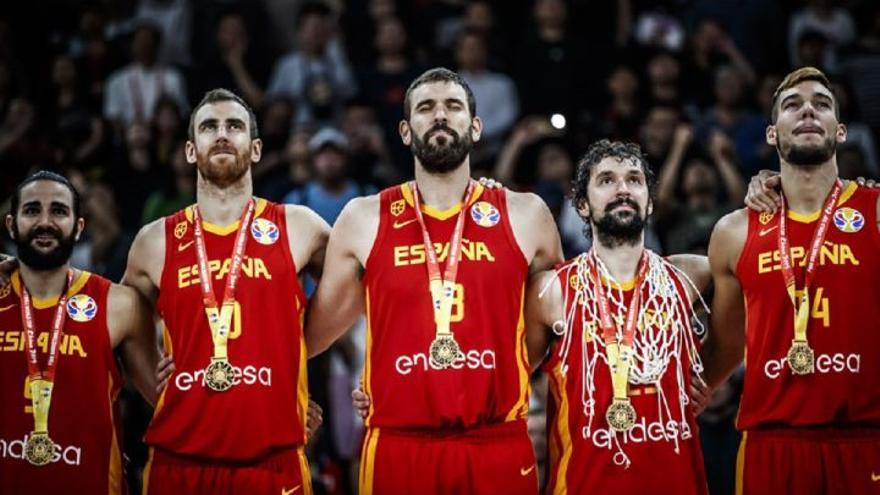 The Spanish Olympic team that will parade through the Tokyo National Stadium this Friday has reasons to do so with a smile Hidden Behind the Mask: Arrives at the Games with a extensive catalog of medal options, backed by the results of the last seasons, which would allow him to improve the 17 podiums of Rio 2016 and, in the best of cases, approach the magic figure of the 22 metals of Barcelona 92.

“If I go sport by sport, in all of them there are athletes, boys and girls, who can opt for the medal“, has assured the president of the COE, Alejandro Blanco, who never predicts the results. In his opinion, the barrier of 22 medals will fall one day -the 13 golds of Barcelona are, on the other hand, more distant-, and” hopefully be it in Tokyo, “said the head of the Spanish Olympism.

The delegation of 321 athletes includes nine teams in team sports and all of them have been on the last world or European podiums. In individual disciplines, the guarantee provided by established figures such as Saúl Craviotto, Mireia Belmonte, Orlando Ortega or Lydia Valentín it is accompanied by the emergence of new figures such as Jon Rahm, Nikoloz Sherazadishvili, Adriana Cerezo or Mohamed Katir.

The pandemic, which reduced the competitive calendar to nothing in 2020 and thinned it still in 2021, however, makes forecasting difficult. In each country the athletes have trained under different conditions and with different means and it’s hard to measure fitness of many of the probable rivals.

If the athletic level of a country is measured by the number of teams that qualify for the Games, Spain can boast of being only behind the United States and Australia in the average of the last three editions. It now presents both basketball, handball, water polo and hockey and the men’s soccer team, who this Thursday, in an early game, drew 0-0 with Egypt.

The men’s basketball team led by Sergio Scariolo, world champion, aspire to add their fourth consecutive Olympic medal, after the silvers of 2008 and 2012 and the bronze of 2016. Pau and Marc Gasol, Ricky Rubio, Rudy Fernández, Sergio Llull, Sergio Rodríguez, the Hernangómez form a fearsome group which also has new sap like that of Usman Garuba, 22 years younger than Pau (41).

Lucas Mondelo’s women’s team, runner-up in Rio 2016 and world bronze in 2018, is ready to “make history” in Tokyo after turning the page of the European of Valencia, in which the casualties due to covid altered the plans and the team was left off the podium. Few doubts are offered in handball by the ‘Guerreras’, current world runners-up, and the ‘Hispanos’, continental and third world champions.

World runners-up are also the two water polo teamsWhile in hockey the men’s team was second in the 2019 continental championship, while the women’s team won bronze in both the 2018 World Cup and the 2019 European Championship.

But the competition is unpredictable and can serve as a warning to everyone not to trust tie of the soccer team in its debut against Egypt. A small disappointment, because the team led by Luis de la Fuente was the European Under-21 champion in 2019 and has such established names as Unai Simón, Pau Torres, Mikel Oyarzabal, Eric García and Dani Olmo, who played the recent European Championship with Luis Enrique’s team.

On Athletics Orlando Ortega, current Olympic runner-up and world bronze in 110m hurdles, will pull the car again, as he did in Rio 2016 together with Ruth Beitia. Now the Olympic height champion is already retired, but Orlando will not be alone in the roster of candidates for the podium in Tokyo.

Spain has found a new talent in Mohamed KatirBorn in Morocco and living in Murcia since he was 5 years old, this year, in just one month, he has revolutionized the Spanish midfielder by breaking three very expensive national records, those of 1,500, 3,000 and 5,000 meters. Katir comes to her first Games with great credentials, because she has also been victorious in two Diamond League rallies.

Outside of Ortega and Katir, the always solid triplet Ana Peleteiro, several more applicants to enter the finals and a case as emotional as it is historical, that of the eternal Jesús Ángel García Bragado, who will break all Olympic longevity records. It will be his eighth Games, an unprecedented case in world athletics.

Not just Mireia, not just Saúl

Hopes in swimming are not for this time only in Mireia Belmonte, who has suffered injuries in shoulders and English and will be limited to 800 and 1,500 freestyle and 400 m styles, in addition to relays, after leaving out the 200 butterfly that he won in Rio. Hugo González, continental gold in 200 m styles, and Jessica Vall, three times European medalist and one world medalist, are other assets of swimming. Spain will have representatives in all aquatic disciplines.

Canoeing, the sport that has given Spain the most Olympic joys In recent editions, it has taken Saúl Craviotto, Marcus Cooper, Carlos Arévalo and Rodrigo Germade’s K4 500 to the bow. After the controversial selection process to train the crew, due to an excess of top-level paddlers, he already showed his credentials with his victory in the World Cup in Szeged (Hungary), his last competition before Tokyo. Teresa Portela will play her sixth Games with the encouragement of achieving her first Olympic medal in K1 200, after staying 198 thousandths from the podium in London 2012.

In whitewater, again with double medalist Maialena Chourraut on the team, all options are good in one of the most unpredictable sports.

Still without Olympic medals, but with outstanding results in their well-established careers, triathlete Mario Mola, shooters Alberto Fernández and Fátima Gálvez, gymnast Ray Zapata, ‘pistards’ Albert Torres and Sebastián Mora will seek their first podium at the Games or any of the members of the road cycling team, including Alejandro Valverde in his fifth Olympic presence.

The Entry into the Olympic karate program has given Spain two very clear medal options thanks to the world leadership in kata of Sandra Sánchez and Damián Quintero. Number one in the international ranking, both have maintained throughout the Olympic cycle a close rivalry with two Japanese karate players, Kiyou Shimizu and Ryo Kiyuna who will foreseeably repeat on the mythical stage of the Nippon Budokan.

Other combat sports also have headwinds. Niko Sherazadishvili is a double world judo champion at the age of 25, but his teammates Ana Pérez Box, Fran Garrigós and Julia Figueroa were also world medalists in June. Judo suffers a 21-year Olympic podium drought that may come to an end in the country where the sport was born.

The candle, to erase the zero of Rio

The Spanish sport with the best Olympic record, sailing, left the Rio Games empty. According to Alejandro Blanco, now “he can win the Tokyo medals and recover those of Rio”, such is the quality of the team. With boats classified in all classes, the options multiply. Jordi Xammar and Nicolás Rodríguez in 470, Joan Cardona in Finn and Tara Pacheco and Florian Trittel in Nacra 17 lead the world ranking in their respective classes. The female 470 of Silvia Mas and Paula Barceló is the current world champion and the 49er of Diego Botín and Iago López is runner-up.

Without Nadal or García but with tennis and golf options

Tennis and golf are two of the sports that will suffer the most from the loss of world leading figures at the Games. The Spanish have not been an exception and Rafael Nadal and Roberto Bautista, in the first, and Sergio García, in the second, have given up traveling to Japan to prepare for your next professional tournaments. But Pablo Carreño, Alejandro Davidovich, Carla Suárez or Garbiñe Muguruza and, in golf, the world number one and recent champion of the United States Open, Jon Rahm, are life insurance.

Options are not lacking. There were 20 medals in Athens 2004; 19 in Beijing 2008; 18 in London 2012 and 17 in Rio 2016, for having the latest editions as a reference. “The competition is always unpredictable”, warns Alejandro Blanco. “But the medal options allow us to dream big,” he admits immediately.