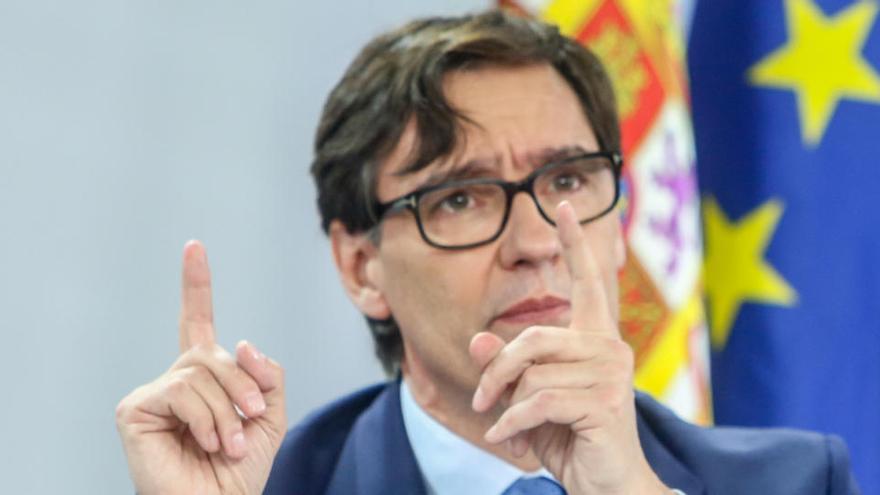 20 million doses to immunize 10 million people in Spain at the beginning of the year. The Government has put numbers to the euphoria on Tuesday by the announcement of the great effectiveness of the advanced double injection vaccine against the coronavirus of the American pharmaceutical company Pfizer, although it has later asked for caution.

If this Monday it was the stock markets that accompanied the change in expectations about the pandemic with strong increases, after a communication without too many details, this Tuesday they were lrulers who have wanted to quantify hope in the face of the escalation of infections and the succession of deaths and restrictions.

Some infections that this Tuesday have continued to set in Spain a rhythm typical of the stabilization detected in previous days, with 17,395 new cases reported, in the same way that hospital pressure and deaths have continued on the delayed path of promotions, with a new maximum in the second wave of 411.

According to data from the World Health Organization (WHO), the positives of COVID-19 diagnosed in the world they already exceed 50.4 million and deaths rise to 1.25 million.

Many scientists appeal to this complex network when analyzing the Pfizer ad, which they value, albeit with a call to reduce the euphoria until all the details are specified of the tests and some doubts that arise from its peculiar public presentation are resolved, such as its effectiveness beyond the days verified until now.

From the beginning of the pandemic lVaccines have been the goal towards which they are running at hitherto unsuspected speeds Hundreds of projects, a dozen of which are in advanced phase 3, such as that of the American Pfizer and the German BioNTech, which claim to be 90 percent effective.

After considering that the announcement is “a promising and relevant step”, the Minister of Health, Salvador Illa, estimates that Spain will have 20 million doses that would immunize 10 million people, being a double dose vaccine, from the beginning of 2021 or even at the end of this year if things “go very well”.

“At the beginning of January, perhaps with other vaccines, we will be able to start a vaccination phase and we calculate that around May we will be able to have a sufficiently relevant percentage of the vaccinated population, “said the minister on RTVE.

Illa has underlined that vaccines “will be free” and that for months there has been a working group with the autonomous communities to set the parameters and priorities, before adding that the logical thing is that the elderly and health personnel are the first to be vaccinated.

A few hours later, the Ministry of Health has released a note on the data regarding the efficacy of Pfizer’s vaccine in which, while considering “very promising its high level of protection”, ask for caution.

“Due to the characteristics of the study, it is necessary to be cautious and wait until the clinical trial has finished in order to be able to analyze all the data and draw solid conclusions,” underlines the statement, which recalls that the Agency has not yet been able to carry out a full formal evaluation. European Medicines Agency (EMA).

Pfizer’s vaccine is based on the production, to generate immune memory, of the protein Spike, the gateway for the new SAR-CoV-2 coronavirus into cells to spread. The same system uses other similar vaccines, also in advance, such as that of the Modern Pharmaceutical.

Beyond appealing to prudence, Scientists emphasize on this vaccine that an RNA-based one has never been marketed in humans and in that the double dose can pose problems of distribution and storage, as well as its necessary conservation at temperatures between -70 and -80 degrees.

Vaccines are the goal of a career in the fight against the virus that this Tuesday has reproduced in Spain the trend of last week: contagions decrease, although very slowly, as shown by the accumulated average incidence (524.60), and deaths increase, with new daily record for the second wave: 411.

Catalonia has registered 109 deaths in the last 24 hours and Andalusia 95, in an upward trend that explains the delay in deaths in relation to infections, as happens about two weeks before with hospitalizations.

“The death toll may continue to rise for a few days, we are giving 1,200 cases in seven days (…) We have to wait. The improvement in hospitalization and ICUs may be seen a little earlier, “said Fernando Simón, director of the Center for the Coordination of Health Alerts and Emergencies (CCAES).

At the moment, hospital pressure continues to grow with nine communities and Ceuta and Melilla with the ucis above the average of 31.70 percent, led by La Rioja (60%) and Aragón (51%).

To reduce this pressure and shortly after the deaths should continue to slow down the transmission of the virus That, according to what Simón said this Tuesday, reached its peak between October 24 and 25 and, since then, has been descending smoothly.

“In 13 of the 19 communities the incidents are stabilized or in decline, in the rest they are on the rise”, remarked the director of the CCAES, who has insisted on the need to properly apply the restrictive measures in force.