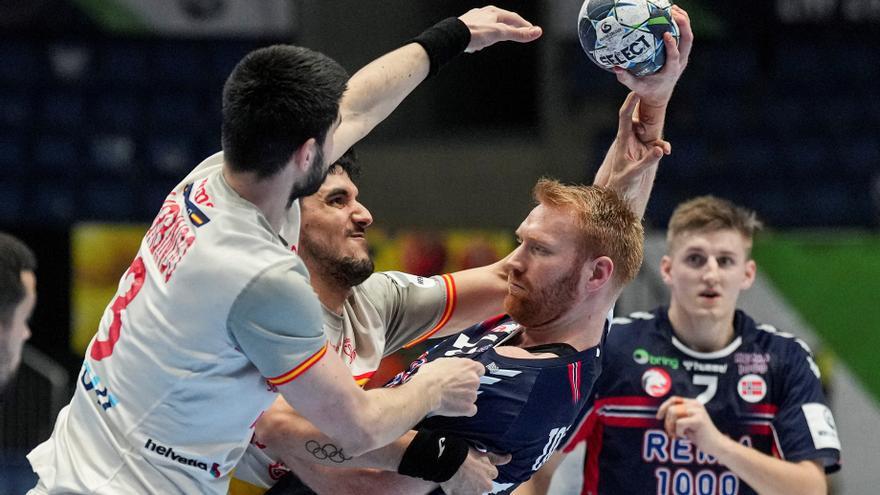 The Spanish handball team will have to wait to seal qualification for the semifinals of the European Championships in Hungary and Slovakia after lose this Sunday by 23-27 against Norway, in a meeting in which never found an answer, neither in attack nor in defense, to the game of the Nordic team.

A defeat, the first of those of Jordi Ribera in this European, which will not prevent the ‘Hispanics’ from reaching the last day, in which they will face the already eliminated Poland next Tuesday, depending on themselves to access the fight for the medals.

Despite being aware that he had to act with the necessary patience in attack to create spaces in the solid Norwegian defense, the Spanish team did not take long to fall into the precipitation.

The rush generated a double problem for the Spanish team, since with his quick shots not only allowed him to gain confidence goalkeeper Torbjoern Bergerud, but also, and perhaps most dangerously, fueled the Nordic team’s swift transition game.

A real headache for the ‘Hispanics’, who without time to make the attack-defense changes and to organize their defense offered numerous spaces that Norway took advantage again and again through center Magnus Gullerud, who signed up to four goals in the first half.

The offensive and defensive difficulties of Spain allowed the Nordics to place themselves after thirteen minutes of play with a disturbing four-goal lead (4-8) which forced the Spanish coach to urgently request a time-out.

But Spain continued to seek offensive actions in the central zone, despite the fact that when the ball reached the wings it showed great effectiveness, as evidenced by the fact that Aleix Gómez scored the first four goals for the Spanish team.

A situation that seemed to change with the exit to the track of the central defender Dani Sarmiento, who gave a little more continuity to the offensive game of the Spanish team, which did not take long to translate into an improvement in its effectiveness (8-10).

Spain stopped the rapid transitions of the Norwegian team, who were much less confident in their attack when faced with a perfectly formed Spanish defence.

A circumstance that, together with the irruption of goalkeeper Gonzalo Pérez de Vargas, seemed to put Spain on the path to redirecting the situation, but once again the lack of success in attack, against an increasingly closed Norway on the six meter line, ended the Spanish team’s hopes of a comeback.

Spain came into the break three goals behind (11-14) that forced her to a radical change in the second period if she wanted to win.

The Spanish side needed something to cling to in order to believe in the comeback and seemed to find it in the double superiority they enjoyed at the start of the second half with the exclusions of Vetle Aga and Kent Tonnesen.

But Even so, the Spanish team could not reduce its disadvantage, who could not have been more unlucky in superiority, since if Erik Toft scored on a ball that, after hitting a post, entered the goal after touching Gonzalo Pérez de Vargas, the winger Sebastian Barthold scored thanks to the fall of his defender.

However, something had seemed to change in the Spanish team, which clinging to Maqueda’s arm seemed to find the way to hurt to a Norwegian defense that had lived very comfortably until then.

Also Read  NATURAL REMEDIES | How to avoid gases in our stomach

In fact, Spain came to stand at forty minutes just one goal on the scoreboard (19-20) with a goal from Agustín Casado, who definitely occupied the position of left back.

The problem, however, was that the Spanish team’s offensive improvement was not accompanied by a step forward in defense, unable to stop the lashes of Harald Reinkind and Erik Toft, who fired back the Norwegian advantage to four goals (19-23) with less than fifteen minutes to go.

But without defense, the pillar on which their recent successes have been based, there was little the Spanish team could do, who, forced to score in each of his attacks to not allow the Norwegians to make a final escape, lost the fluidity and success he had achieved at the start of the second half.

Spain went more than eleven minutes without scoring and Norway reached its maximum advantage (19-24) with ten to go.

A time in which the Spanish players, despite their determination to crash with the goalkeeper Kristian Saeveraas, managed to at least reduce their deficit to four goals (23-27), the same ones for which they beat Sweden, which could be important if there is a three-way tie between the Spanish, Norwegians and Swedes, who will face each other on the last day.

Also Read  India v New Zealand: how the finalists of the World Test Championship are shaping up | Cricket

Referees: Pavicevic and Raznatovic (MNE). The Norwegian player Vetle Aga (m.60) was expelled for three suspensions. In addition, they excluded Maqueda and Casado for Spain for two minutes, and Toft, Overby and Tonnesen for Norway.

Incidents: Match corresponding to the third day of group II of the second phase of the European Championships between Hungary and Slovakia, played at the Ondrej Nepela Arena in Bratislava.