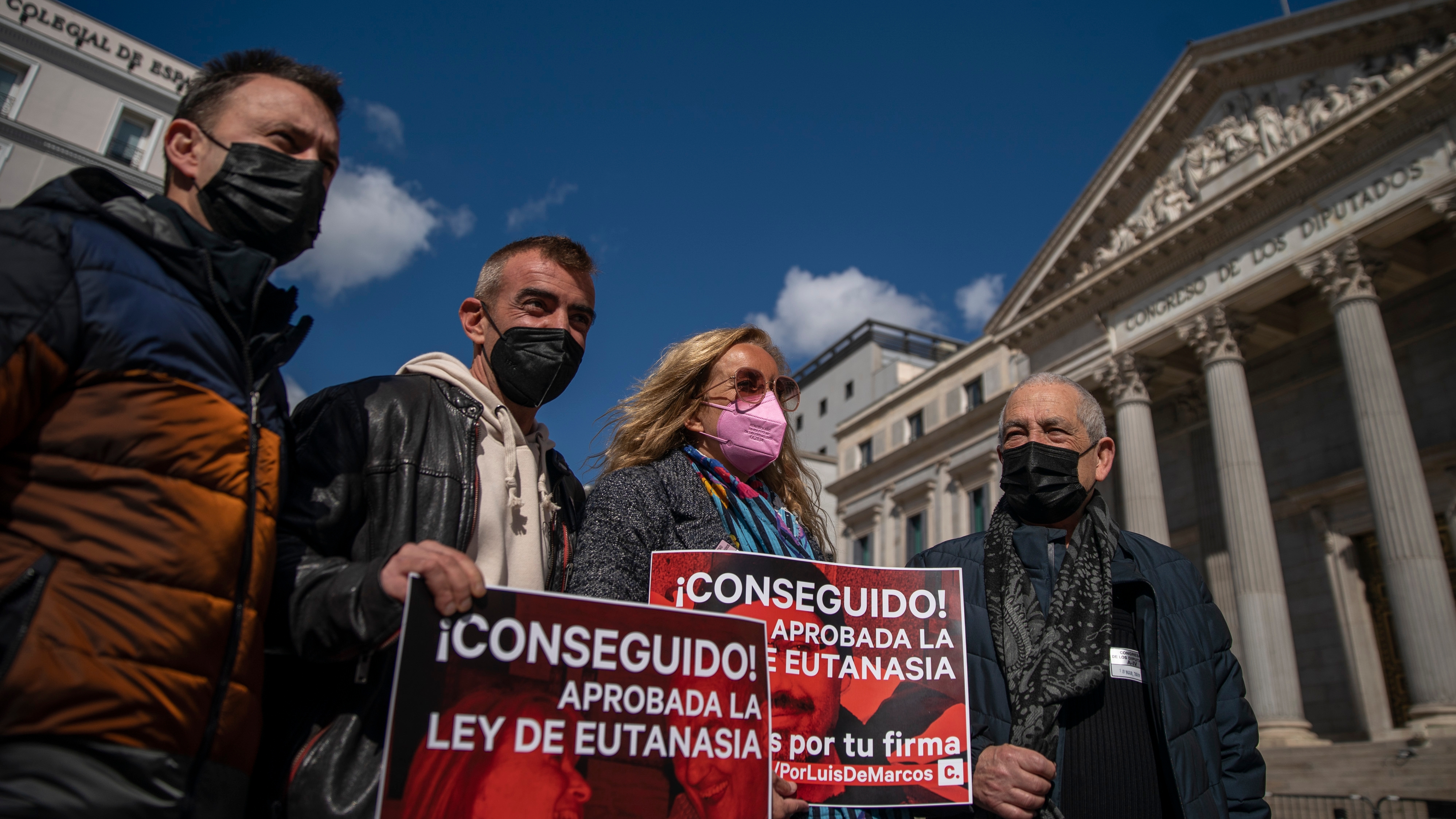 Spain joined the Netherlands, Belgium, Luxembourg and Canada on Thursday as one of the first countries in the world to regulate euthanasia. The Congress of Deputies, with 202 votes in favor, 141 against and two abstentions, has approved the law promoted by the PSOE, which will enter into force within three months. To request it, the affected person must “suffer a serious and incurable disease or a serious, chronic and incapacitating condition” that causes “intolerable suffering”. Although it has been removed from the title of the proposal during the parliamentary debate, the norm regulates both euthanasia itself – ”direct administration of a substance to the patient by the competent health professional” -, and what has been called medically assisted suicide – “The prescription or supply to the patient by the health professional of a substance, so that he can self-administer it, to cause his own death” -.

With the approval of the norm, Spain joins a brief group of countries in which euthanasia is regulated. In Portugal, the Constitutional Court has opposed the law, while in Colombia the practice is legal, according to a Constitutional Court ruling, but it is not regulated. In New Zealand the law is scheduled to take effect in November. In parts of the United States and Australia the practice is also permitted.

Unlike the other laws in force, the Spanish one, much more guaranteeing, establishes a series of steps that can delay the process, as soon as the patient requests it, more than a month. This begins with the request of the affected party, which must be manifested in writing twice in 15 days. In this application it should be clear that the decision is not “the result of any external pressure”. In addition, to ensure the clear will of the applicant, he must have had in writing “the information that exists about his medical process, the different alternatives and possibilities of action, including that of accessing comprehensive palliative care included in the common portfolio of services and benefits to which he is entitled in accordance with the regulations on care for dependency ”. Once the process has started, the affected party may change his decision at any time and, once he receives the relevant authorization, delay its application for as long as he wants.

On video, statements by the Minister of Health, Carolina Darias, this Thursday in Congress.EUROPA PRESS / E. Parra / VIDEO: EFE

From the second request, the patient’s doctor must transfer the request to the corresponding regional commission, which will determine which two professionals, outside the case, will examine the request. Subsequently, the commission will approve or reject the decision of these two specialists. The law does not fix the composition of this commission, which will be determined by each autonomous community, except that it must consist of at least seven people, with medical, legal and nursing specialists. This commission must respond to the request in 19 days.

The norm has been promoted by the Socialist Group, but has had a strong impulse from relatives of people who have asked for help to die, grouped by the Change.org platform, that a little over a year ago they submitted a million signatures in favor of the initiative: the families of Maribel Tellaetxe, who had asked her husband and children to help her die when Alzheimer’s erased their names; of María José Carrasco, the woman with advanced multiple sclerosis whose husband is prosecuted for providing her with a drug to commit suicide or, among others, Asun Gómez, Luis de Marco’s partner, who died after more than a month of agony until he got terminal sedation . “Today I will go to bed having left a backpack,” said Danel Lorente, Maribel’s son, before the session, concentrated in front of the Congress steps. “It is an emotion and a relief,” added his brother David. “Amatxu could not enjoy this right.”

“I have had to hear that they call me a murderer, but this fight is also a form of love,” said Asun Gómez. “87% of citizens support euthanasia, and that is without counting that there is someone who does it without daring to say it,” he insisted, referring to surveys such as Metroscopia, which confirm growing and sustained support for the measure.

Those affected have not been able to follow the debate from the guest gallery due to the security measures against the covid. The debate has passed through the Chambers with PP, UPN and Vox asking for a palliative law that none has presented, and affirming that with this norm murder is legalized. And the rest, supporting the text with nuances on the basis that the right to a dignified life must be linked to that of having a dignified death. Vox has already announced that it is going to appeal the rule before the Constitutional Court, and has warned that if it comes to power it would repeal it.

The norm has received the rejection of the Collegiate Medical Organization, which warns that it is going to monitor how the conscientious objection of professionals is regulated and affirms that euthanasia is not a medical act, although the law provides that it is a right converted into a health system benefit. Also the Bioethics Committee of Spain has rejected that it is considered a right.

Supporters of the law also don’t believe their work is done. Asun Gómez has expressed her fear that the regional commissions have biases that make it easier in some places to receive the requested help than in others. Ángel Hernández, the husband of María José Carrasco, whom he helped to die, points in the same direction: “Now we have its implementation,” he warns.

The president of the Right to Die with Dignity (DMD) association, Javier Velasco, has said that the law “will save many people a lot of suffering. Few euthanasias will be requested, but the law will benefit all of society. In countries where euthanasia is legal, DMD reports, its practice accounts for between 1% and 4% of all annual deaths. “In a normal year (without a pandemic) in Spain just over 420,000 people die, so it is reasonable to estimate that between 4,000 and 17,000 people decide to anticipate their death each year once the law is established. International experience suggests that the figures will be smaller at the beginning and will increase as knowledge about the law grows among citizens, health professionals and the administrations themselves ”.