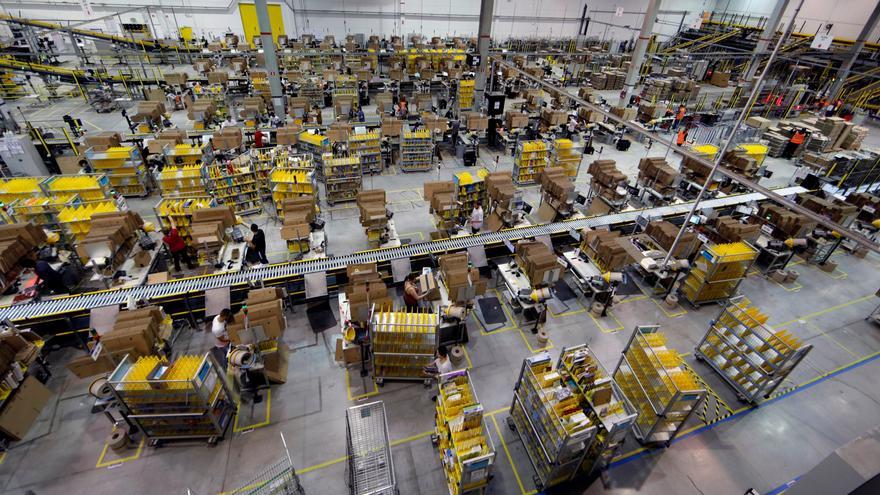 The ‘marketplaces‘or global markets in internet gain weight in Spain. The consumers They spend more and more on the internet but they concentrate their purchases on a few websites and this trend has forced large companies in the commercial sector to seek formulas to increase their weight in the market. The phenomenon, called by some as ‘Amazondependence’, spreads and widens in each attempt of consumerist revolution such as the recent one Black Friday or the Christmas campaign. The change is radical compared to previous years. Distribution companies and manufacturers, many of them with their own sales platforms, are beginning to see the large marketplaces as allies in their commercial strategies and keys for future growth. The idea of ​​creating your own sales website gives way to strategies based on the presence of large internet operators. Amazon is the main ‘marketplace’, but El English Court, Aliexpress O Fnac, for example, they enter fully into that poker of large general virtual markets.

Amazon It has managed to exceed the 12,000 Spanish companies that sell on its website, most of them SMEs, with exports of the order of 650 million euros last year, 30% more than the previous year. The amount of exports is expected to increase this year. The figures provided by the e-commerce giant are staggering with more than 60 million products sold per year. Half of the Spanish companies on Amazon send their products abroad.

In the case of Aliexpress, the firm assures that in this edition of 11.11 or Singles Day, Spanish companies had about 11,000 products on offer, 11% more than last year. Spain has been the second most important market in the world for Aliexpress during the last three editions of Singles Day “, acknowledged Estela Ye, executive director of Aliexpress in Spain, Italy and France. The Chinese giant Aliexpress reinforces growth in Spain more by Sellers’ way of promoting purchases, through agreements with local companies eager for international growth. Aliexpress’s strategy began some years ago and is key to accelerating this growth. More than 8,000 Spanish companies sell through the Chinese platform Aliexpress, twice as much as before the pandemic.

The English Court, The flagship of distribution in Spain with its department stores, it has also recently presented its commitment to full omnichannel and the measure of opening its website to manufacturers. The decision responds to the good results of the marketplace division in recent months, in which profitability levels surprised the management of the Spanish company.

Competition between large international platforms or marketplaces is growing but uneven. The undisputed leader is Amazon. It is the largest internet store in Spain according to data from Netrica and Alexa released by Eshow Magazine, tripling the revenue of Aliexpress, second on the list. El Corte Inglés, Carrefour and Mediamarkt complete the classification. However, depending on the type of product sold, other firms with their own sales portals join the top of electronic commerce. This is the case of food distribution firms (Mercadona, Dia, Consum, Hipercor …), pet products (Tíanimal, Zooplus, Miscota, Kiwoko, Animalear), Decoration (Ikea, Leroy Merlin, Conforama, Westwing, Bauhaus ), Sports (Decathlon, Adidas, Deporvillage, Nike, Forum Sport), Electronics (Mediamarkt, Microsoft, PcComponentes, Apple, Fnac), Fashion (Zalando, Zara, Privalia, Mango, Pull & Bear).

El Corte Inglés (ECI) has seen the concept of ‘marketplace’ as a clear growth path for the future. ECI increased its eCommerce sales by 132%, to around 1.8 billion euros, according to the latest annual report. From representing only 5.8% of the group’s ‘retail’ sales in 2019, now electronic commerce reached 17.3% of total sales, in a year in which it registered 760 million visits ‘online’. As another positive fact, the ‘online’ basket is 50% higher than the purchase in the store. The originally called ‘marketplace’ product channel has gained weight and has led El Corte Inglés to integrated stock and the search for complete omnichannel, which includes a team of 2,500 telephone customer advisors. The assisted ‘online’ sale is a turn of the screw to the sale on the internet. ECI’s gear is complemented by the strengthening of the logistics business, a source of higher margins.

The change in strategy of El Corte Inglés revolutionizes the first division of the distribution sector in Spain and is a direct challenge to the competition of Amazon. The head of the electronic commerce area of ​​El Corte Inglés, Ricardo Goizueta, recognizes that the profitability of each sale in the ‘marketplace’ and on the internet “is above the physical business” and that “more brands want to participate” on the El Corte Inglés website. Having department stores has become a competitive advantage over Amazon by offering great capillarity throughout the territory. In these ‘marketplace’ products, which are not physically in ECI stores or warehouses, the seller and not El Corte Inglés is responsible for the offers that may appear, as well as for providing the legally established guarantee. Consequently, profitability levels increase.

Almost two out of every three Spaniards (64%) continue to prefer the ‘marketplace’ option, according to a study by the logistics firm Packlink, and Spain remains well below other markets such as Italian (89%) or German (85 %). For Goizueta, “to be a reference you have to be in the minds of consumers and at the head of the product category.” In this commercial war to enter the ‘top 5’ of the rankings are currently the large distribution groups.

A similar strategy with respect to ‘marketplaces’ has been followed by FNAC in recent years. It offers third-party products on its sales platform. According Moses Orgaz, responsible for the ‘Marketplace’ area in Spain, the channel “is profitable” and has been able to offer “an expanded range of products and categories with some 700 external sellers, with a predominance of national and European sellers, with a level of service similar to that of Fnac, something we put a lot of focus on “. Fnac has known how to move from the sale of books to sports products, with very good results in recent times in the sale of household appliances.

Also Read  Almost 600 million people in the world, 7.5% of the total, speak Spanish

In Orgaz’s opinion, the emergence of the ‘marketplace’ supposes a change of mentality in companies and for the consumer: “We have a greater offer of products, the consumer knows that he is buying from a third party but that he has the guarantees of purchase and service of Fnac, and increases the availability of products to limits that logistically would be difficult to assume for any business “.

The ‘marketplaces’, whether of Amazon, El Corte Inglés, Aliexpress or Fnac, without forgetting other specialized ones, are the catalyst for the future growth of electronic commerce, opening doors to third parties but at the same time restricting the ability to reach customers in a few operators.

Aliexpress aspires to geometrically boost its business in Spain next year. Spain is the third most important market in the world for the Chinese giant. The Spanish sellers on Aliexpress are already more than 8,000 companies. Most of its exports are concentrated in Europe, specifically in countries such as France, Italy, Germany, Poland or Portugal, as well as Russia.

The products found in warehouses in Spain are becoming more and more strategic for Aliexpress, especially in these times of tension in international transport and Asian manufacturing. Local stores are more used in high demand products (novelties or best-selling items).

The German platform for international shipments Seven Senders estimates that 23% of shipments from online businesses are international in Europe. In Spain, the percentage is presumed higher, although there are no reliable data on the matter. Aliexpress has its most relevant European market in Spain. Cross-border shipping is becoming more and more common, although for most consumers the price factor is still crucial, so zero shipping costs are a key element.