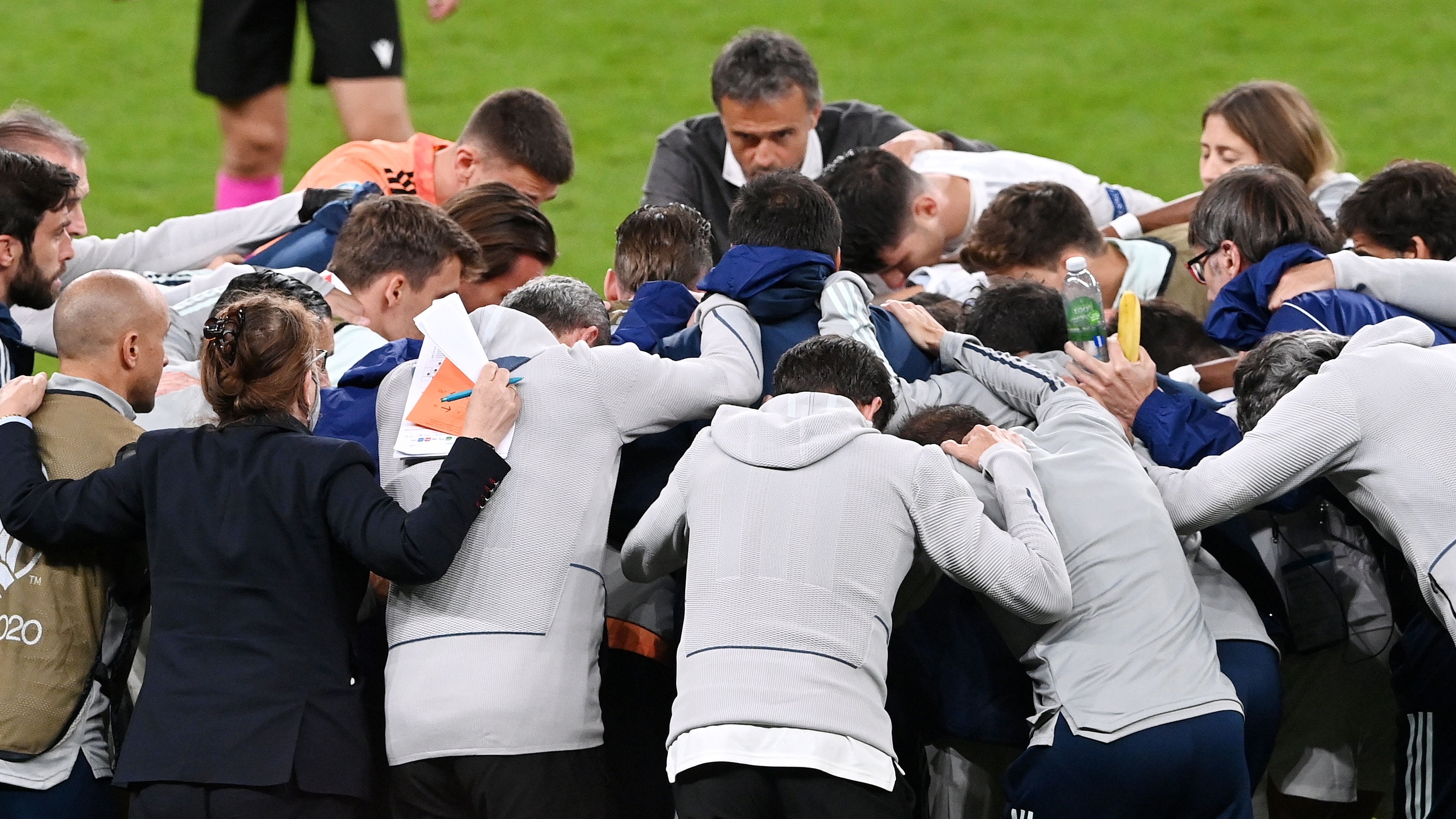 When Luis Enrique entered the Wembley dressing room at the end of the meeting with Italy, he did not want to be part of the atmosphere of the wake. He ordered to put on music to break the silence and end the crying of several players before delivering his last harangue as the supreme leader of the group. “What are you doing crying? Head high. Football owes you one because the game you have played has been spectacular, ”snapped the coach standing up, with the president of the federation, Luis Rubiales, and his entire coaching staff at his back.

The intervention of the selector closed a concentration and a Eurocopa plagued of adversities. They have been 38 hectic days in which Luis Enrique has ended up finding success with a methodology and a script so daring with high pressure that bordered on defensive suicide. “At first, since he announced the list [23 de mayo] and we concentrate [31 de mayo] there were more criticisms than anything else, but he has always conveyed optimism and confidence when the difficulties that arose seemed to affect the team “, they report in the federation. The absence of Sergio Ramos and Real Madrid players from the list of a great national team competition for the first time since the 1950 World Cup sparked the first blaze of reproach. With the positive of Sergio Busquets, his decision to have named 24 players, despite the fact that UEFA allowed 26, was even more questioned if possible.

The creation of another bubble with 17 players recruited urgently in case the coronavirus ravaged the main group increased the stress of Luis Enrique. This, together with the individual or small group training sessions, were one of the most difficult moments to handle for the coach and for the group. The quarantine directly affected the application of its manual and the last adjustments that it intended to impose before entering the competition.

The full conviction of the game model to be applied by the Asturian coach has been the engine on which the final success has revolved. Even when the absence of a goal and the lack of defensive forcefulness brought ties with Sweden and Poland. Only a squad with blind faith in its coach can deploy pressure throughout the field as it has presented all its rivals in the six games played. The magnetism that he has generated is derived from a character in which the versatile and combative player that he was and his airs of a sympathetic and caciquil gym teacher are mixed with which young players from a squad with an average age of 26 see him. , 5 years old. One of the great incentives for one of the most rookie Spanish teams in remembrance has been the label of semi-unknown to the general public that hung from most of them. Spurred on by that reality, they gave Luis Enrique what any coach wants. They did not put in a bad place the coach’s public discourse in which he proclaimed that they would always play to dominate the games, occupying the spaces to pressure them like a guerrilla and trying to win them with the ball. Spain was on many occasions an offensive torrent, with little goal against Sweden (0-0), Poland (1-1), Switzerland (1-1) and Italy (1-1). In defense, Italy’s goal sums up the risks of the daring plan. A transition started by Donnarumma with a short hand throw after intercepting a cross into the box from the left turned into a four-touch counter-attack lightning to free court from the right.

The youth of the vast majority of internationals has facilitated that unconditional surrender of footballers to Luis Enrique’s ideology. The result has been, they analyze from the federation, that of the half dozen games, four have been very good and two, that of Poland and Switzerland, weaker. “But in all of us we have been superior to our rivals. Italy wanted to look for us by going to press up and could not. Only when they scored the goal and in overtime did they shamelessly get behind, “they add from the Ciudad del Fútbol de Las Rozas.

The concept of total competition to enter the starting eleven inoculated in the players has been another of the pillars of Luis Enrique’s model. In training prior to a match, he addressed his players one by one with a question in which he did not accept no for an answer. “Do you think you’re going to play tomorrow?” Asked the coach to the surprise that in more than one international he produced the compromising question that had the rest as a witness to the answer to be given.

With the help of the psychologist, Joaquín Valdés, touching the fiber of the group or the individual have also been a constant in the day-to-day of the coach and his coaching staff. Against Slovakia, with the match already resolved, he decided to replace Azpilicueta in the absence of a quarter of an hour due to slight annoyances. Marcos Llorente, the other right-back, had warmed up, but finally chose Adama Traoré so that he could at least tell that he made his tournament debut. “Morata and ten more play” was another proclamation aimed at reinforcing one of the players who has played under the most pressure. “You have to have the memory of a fish, like tennis players who forget the ball they just missed,” he dedicated to Unai Simón after his mistake against Croatia.

No rush to renew

The rotations from one game to another have not been as numerous as his statements in the concentrations prior to the European Championship suggested. It has not gone from three changes from one eleven to another. The competition has been forming the backbone that he was blamed for not having. Unai Simón and Laporte have played every minute. Azpilicueta and Alba took the wings and the Busquets trio, Koke, Pedri were untouchable once the captain reappeared against Slovakia. Morata, except for his substitution against Italy to apply the variant of the false nine with Dani Olmo, has been the undisputed starter in the center of the attack. Sarabia, until it broke with Switzerland, also achieved that status. Ferran Torres, Dani Olmo and Gerard Moreno are the ones who have entered and left the most of an eleven that touched the final of the Eurocup nine years later.

“The first objective was and continues to be to win, but it has also been achieved with the goal of putting the team back among the best in Europe and engaging the fans. There is a young group with a lot of talent that has worked at the highest level “, they say in the federation, where they also assure that neither Rubiales nor Luis Enrique are in a hurry to renew:” They have a contract until the World Cup in Qatar and trust is mutual.