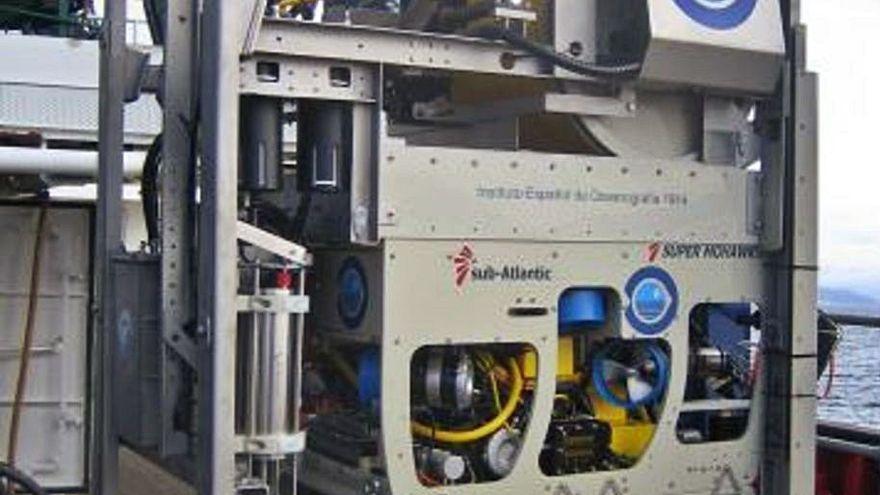 Spare parts for the Liropus 2000 underwater robot, with which the vessel is operating Ángeles Alvariño in the search for the bodies of Anna and Tomás Gimeno, they are runing out. In these 31 days of work, practically uninterrupted, this marvel of the technique, like any other device, has been subject to breakdowns and inconveniences, to deterioration inherent over time, to the fact of acting in a complex environment, such as the background of the sea, and at the expense of an element as aggressive as salt. It has accumulated more than 600 hours of work at unimaginable depths, between 1,000 and 1,600 meters, and is “on the brink of collapse”, as recognized by José Cubeiro, head and coordinator of the team of experts that handles the robot.

With everything, the biggest drawback for the normal functioning of the robot is derived from the provision of spare parts, which must arrive directly from the United Kingdom, a trip that usually takes between two and three months since its management.

In an interview with the Herrera program in COPE, José Cubeiro explained that, at the moment, the oceanographic vessel continues to track the area that the Civil Guard researchers are marking, a situation that he considers difficult due to “the immensity of the sea”, and although He does not know how long they will continue looking for the remains of Anna and her father, he assures that they will keep trying.

However, he distrusts “very much” that little Anna can be found, since when he gets out of the bag, “the chances of recovering a body of such a small girl and in the sea are very difficult” not to say practically impossible. “Locating the bags with the anchor is relatively easy, because it is a detestable object and it can be located, but recovering a body without any sign of signs is very, very difficult.”

Despite the difficulty, Cubeiro makes it clear that they will never give up; However, he also recognizes that they have already combed many areas and the chances of finding something else are remote, decreasing because “no one knows exactly where the missing bodies can be located. The truth is that it is complex,” he stressed.

A month churning the funds

The Ángeles Alvariño will fulfill tomorrow, June 30, a month since it began tracking work in the waters of Tenerife to locate Anna, Olivia and Tomás, which has caused the cancellation of contracts committed with the Liropus. Cubeiro explained that this robot is a vehicle owned by the Spanish Institute of Oceanography (IEO) and that despite the work that has been pending due to its involvement in the case of Tenerife, the public body “has endeavored to help locate these bodies to to be able to resolve the situation “, as he maintains that” there is a very strong commitment on the part of all of us who are involved in the search efforts. ”

During the development of these works, on June 10, the underwater robot found the lifeless body of Olivia, the oldest of the girls, at a depth of 1,000 meters, inside a bag weighed down by the anchor of the pleasure boat. José Cubeiro remembers how they lived that moment. “We all have a hard time. It really is a very difficult time, but there is no choice but to do itShe admits that it was probably one of the ‘most unpleasant’ situations they have ever experienced, but she is pleased to have at least found Olivia. ‘Imagine if none of the girls had turned up. The uncertainty of not knowing if they are at the bottom of the sea, they have disappeared, they are elsewhere … It must be very difficult to carry, “he asserts.

Beatriz Zimmermman, the girls’ mother, is in agony. In spite of that, he has thanked in a letter all the work that the oceanographic vessel has been developing. “We appreciate that letter and we are quite excited because it is a truly unimaginable situation that these things could happen,” says Cubeiro, who assures that they have done everything in their power. “We have sought and used all the means we have had, the hours that have been necessary and unfortunately we have only been able to recover Olivia. We would have liked to recover the two girls, at least so they could rest and his mother knew where they are, “he says.

The Ángeles Alvariño remained moored at the Los Llanos Dock from 8 am on Monday, provisioning itself and proceeding to the relief of the crew. The bad sea conditions and the strong wind, which will continue to blow today, made it difficult for the ship to maneuver normally.

A technical wonder of 1.4 million

Liropus 2000 is an unmanned underwater vehicle (ROV), capable of operating up to more than 2,000 meters deep. It has been configured to measure, according to the requirements of the Spanish Institute of Oceanography (IEO), to carry out observation and collection of samples and data. Its acquisition represented an investment of 1,450,000 euros, financed 70 percent with ERDF funds and the remaining 30 percent with the IEO budget. Oceanographic activity, image capture and recording require exceptional quality and clarity, which is why this aspect has been taken care of, providing it with a powerful lighting system of 17,000 lumens of power (17 times more than a 100-watt bulb) and high-performance cameras, one of them high definition (HD format) and the other very low luminosity. Regarding oceanographic instrumentation, the Liropus has two CTD equipment to measure temperature, pressure and salinity, as well as a Doppler effect currentmeter to study currents at the depths where it operates. The rack is designed to also install up to 20 kilograms of any other required scientific instrumentation. For taking samples, it has two precision hydraulic manipulator arms for the collection of solid elements and a suction system for liquid and gaseous samples. SL