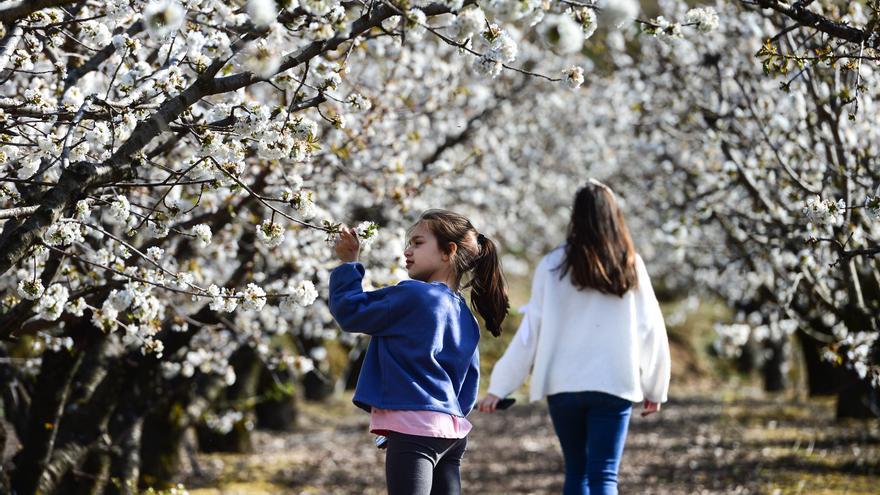 The spring 2021 will begin this Saturday, March 20 at 10.37 am (official peninsular time) and will last for 92 days and 18 hours, ending on June 21 with the beginning of summer, according to calculations by the National Astronomical Observatory (OAN), the National Geographic Institute (IGN) of the Ministry of Transport, Mobility and Urban Agenda.

During this season, there will be two eclipses. The first of them will be on May 26. It is a total lunar eclipse that will be visible in East Asia, Australia, the Pacific and America, therefore, it will not be visible in Spain.

Likewise, there will be three full moons. The first full moon of spring will be on March 28, with the next 29 or 30 days later. The next full moons will be April 27 and May 26.

Spring will also leave two meteor showers. The two most important will be the Lyrids and the Eta aquarids.. That of the Lyrids is visible from the northern hemisphere (also from the south but at a slower rate) between April 16 and 25. They have an average rate of activity of 18 meteors per hour, and a speed of 49 km / s for several days.

Despite being a discrete meteor shower, some years the activity rate increases to more than 100 meteors per hour, but it is difficult to predict in what year these “outbursts” will occur.

According to the OAN, 2021 will not be a good year for the observation of the Lyrids, since its moment of maximum activity will occur one day after the Moon reaches its first quarter phase.

The maximum activity of the rain is expected to take place between April 21 and 22; but the Moon, which will have reached the first quarter phase on April 20, will make it difficult to observe during the first part of the night.

The Eta Aquarid meteor shower is visible every year between April 19 and May 28. Their observation is more favorable from places located in the tropics, such as the Canary Islands, and in the southern hemisphere, although they can also be observed in the northern hemisphere.

Eta aquarids are associated with Halley’s Comet, as is the Orionid meteor shower, which occurs in October. The Eta aquarid meteors have an activity rate of between 40 and 85 meteors per hour and a fairly high speed, about 66 kilometers per second.

Unlike the Lyrid, 2021 will not be a bad year for observing the Eta aquarids, since the decreasing Moon will allow the observation of the meteor shower during part of the night.

The maximum activity of this meteor shower is expected to take place between May 5 and 6. The Moon, which will be in its last quarter phase on May 3, will allow meteors to be observed for part of the night.

As for the fictional groupings of stars known as constellations, spring is a good time to observe it, as the nights are still long and it is less cold than in winter.

One of the most characteristic constellations of spring is Leo, easy to locate towards the south after sunset due to its inverted question mark shape. Looking north from Leo, you can find the also easily recognizable Ursa Major. Towards the east of Leo, the constellations of Virgo and the Boyero stand out, each with a bright star: Spica in Virgo and Arturo in the Boyero.

The triangle formed by these two stars and by Regulus in Leo is called the Spring Triangle, and its location in the sky provides a good starting point to begin exploring the rest of the constellations visible during the season.

With large binoculars or a small telescope, equipped with a suitable lunar filter, the relief of the Moon can be observed, according to the OAN.

To have a good view of it, the Observatory recommends observing it night after night as the moon’s illumination grows, as this is how new orographic accidents appear.

When the night is darker due to the new moon, you can try to see emission nebulae such as the Orion nebula complex (Messier 42 and 43), the Pleiades group of stars and the rest of the supernova known as the Crab nebula ( Messier 1).

With binoculars, you can also see the brightest moons of Jupiter and you can take a tour of the starry strip that constitutes the Milky Way.

As usual, daylight saving time begins on the last Sunday in March. Thus, at 2:00 a.m. (peninsular time) on Sunday, March 28, the clocks will be advanced until 3:00 a.m.. That day, therefore, will officially have one hour less.

At the moment, the European Parliament is debating the possibility of eliminating time changes from 2021.

Although there is still no firm decision, the NAO considers it “very possible” that, in the near future, the European Union will not change the time again in spring and autumn.