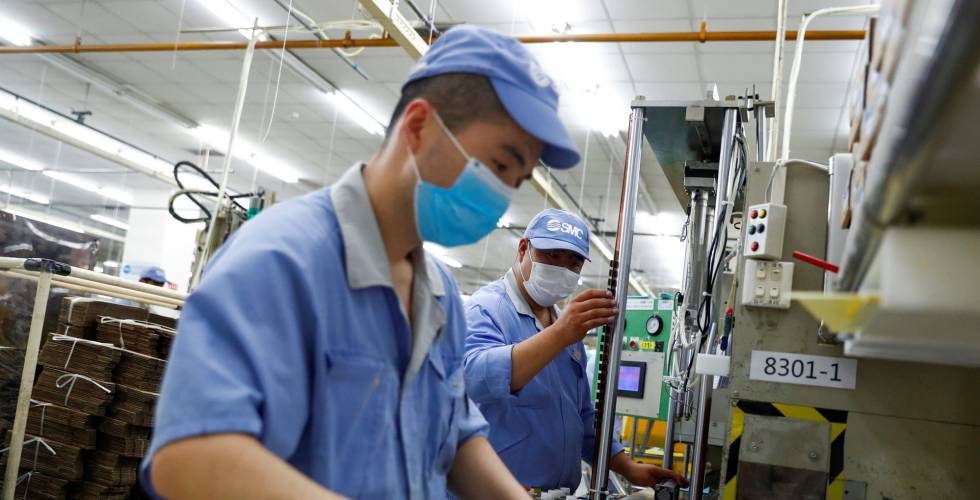 Defaults are a dangerous game. A falling domino, no matter how small, can start a chain reaction with unpredictable consequences. The memory is still fresh. The explosion of junk mortgages in 2007 caused the largest private default in history: 600,000 million dollars (496,000 million euros) in the name of Lehman Brothers, a firm that in its collapse dragged the entire world into a global financial crisis from which very few countries escaped. One of them was China, whose economy was shielded thanks to its relative isolation and a robust stimulus program. Now, the alarms of the Asian giant have jumped at the threat of a hypothetical credit crisis.

Up to five large state-owned companies have entered into successive defaults in recent weeks. The most recent has been Jizhong Energy Group, owned by Minmetals International Trust and in turn by the Government of the Hebei province, which at the end of November announced its inability to meet the deadlines in the repayment of a loan worth 500 million euros. yuan (about 62 million euros).

The list is getting longer and more worrying. Ten groups have not been able to pay off debts totaling 54 billion yuan (6.8 billion euros) in 2020; or what is the same: a third of the accumulated defaults during the last five years are concentrated in this exercise. This trend affects the risk posed by these huge organizations that play a central role, halfway between the economic and the political, in the country’s production model.

The Huachen Automotive case aptly illustrates the root of the problem. This firm, controlled by the Liaoning provincial government and which has among its subsidiaries the operating partner of BMW in China, was one of the first to default on its credit commitments, in this case 1 billion yuan (126 million euros) on last October. Huachen accumulates promissory notes worth 33.5 billion yuan (4.2 billion euros). Its support includes two of the four large state banks, the China Construction Bank and the Industrial and Commercial Bank of China, which have lent the carmaker 2 billion (252 million euros) and 642 million yuan (81 million yuan). ) respectively. “We work with Huachen because it is the largest state-owned company in Liaoning and the local government cannot allow it to fail,” he told the Financial Times an anonymous representative of one of your creditor entities.

One of the main distortions in the Chinese economy lies in the loans that state-owned companies receive at artificially low prices, which affects the distribution of resources throughout the system. This responds to the explicit commitment – reflected in the previous quote – that the government will always come to the aid of those public entities in distress, a calculation that unbalances the market. In recent years, however, the authorities have launched a campaign to make the risks fall more heavily on investors, withdrawing the state network that safeguards them.

This structural reform, while beneficial in the long term, cannot be carried out without some friction in the short term. The global economic context invites conservatism: China is the only advanced economy that will grow in 2020 due to the pandemic, according to the forecasts of the International Monetary Fund. But not everything is rosy. Industrial profits and retail sales remain in negative territory from a year ago and the evolution of the consumer price index points to deflation. And most importantly, indebtedness: in the third quarter China grew by 4.9% with outstanding credit jumping 13.5%, which raised debt to maximum levels close to 333% with respect to GDP, a marked increase compared to the 300% with which 2019 closed.

For this reason, the government’s response to the wave of defaults was awaited with expectation, to see how it weighs the contradictory relationship between stability and reform, short and long term. The message was clear. After holding a meeting on November 23 chaired by Vice Premier Liu He, Xi Jinping’s right-hand man on economic matters, the Financial Stability and Development Committee, the highest regulatory body, pledged to investigate the firms in question and maintain a “zero tolerance” policy with bad practices, after it came to light that some of them may have deliberately defaulted to avoid paying part of their debts.

The striking lack of support shows that the Administration trusts in the capacity of the system to absorb its failures. “This series of defaults will not affect the economy because the cycle is still controlled by the authorities,” says Alicia García Herrero, chief economist for Asia at Natixis. “The cases we have seen so far are basically warning signs to reduce systemic risk. The objective is to scare those who have taken too many risks, whether they are corporations or financial institutions.

The prompt may have worked. The latest of the companies to default, Jizhong Energy Group, has struggled not to follow in the footsteps of its predecessors. On the same day it announced that it could not meet its loan commitment, it managed to raise 3 billion yuan (378 million euros) to anticipate the maturity of two more.

According to sources close to the operation to the specialized media CaixinThese funds would come from insurance companies. Others, on the other hand, point out that the real origin is banking entities of the province, in a coordinated operation in the shadows by the government; which would go to show that, in reality, nothing has changed. Be that as it may, the operation made it possible to stop the chain of unpaid debts and send the message, even in the face of the gallery, that the state will not always be there. Sometimes there are mistakes for which it is enough to teach someone else’s flesh.