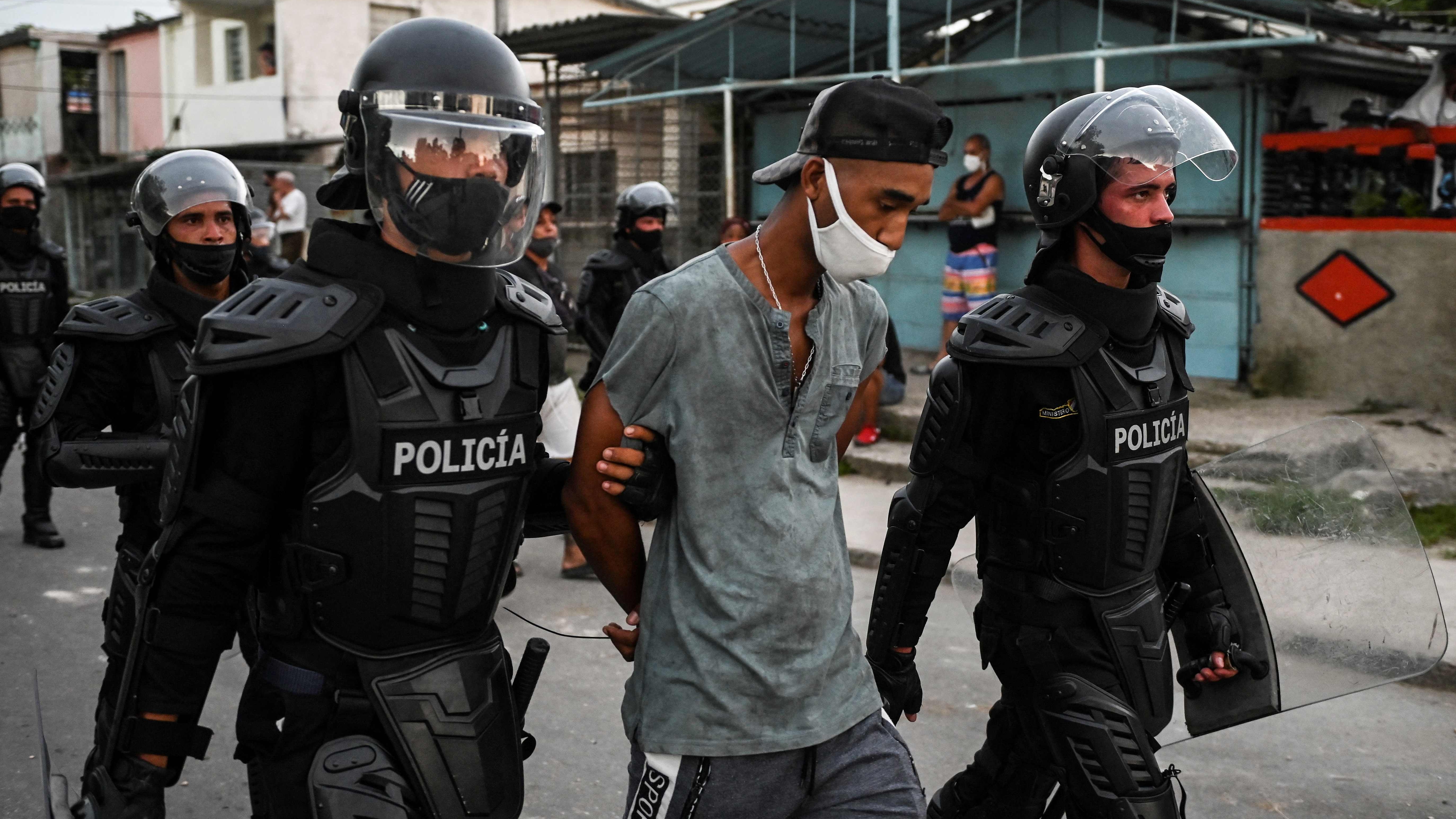 The very summary trials against those detained for the protests of July 11 in Cuba have already begun, and they have a queue. Dozens of protesters were brought before the municipal courts in recent days, accused of crimes such as public disorder, incitement to crime or contempt, punished with penalties of up to one year in jail. In one of the first collective proceedings, held in the Diez de Octubre court, two young people were sentenced to 10 months in prison and a dozen to one-year prison sentences, while relatives of some of them denounced that due to the expediency of the procedure They did not have time to choose a lawyer or to prepare their defense. More and more voices, including those of revolutionary figures such as Silvio Rodríguez, are calling for restraint and for those who did not participate in violent acts to be released.

No one yet knows the official number of detainees, the authorities have not given this information. The official opacity is absolute on this issue, although various sources affirm that during the protests of July 11 and 12 there was a great wave of arrests and that the detainees could be even more than half a thousand. Some people have been released without charge and others under house arrest pending trial, and there are also an unknown number of protesters who remain in detention and are likely to be brought directly before judges in the coming days.

The authorities assure that “all procedural guarantees will be respected” despite being summary procedures, which make the defense very complex, since only a few days pass between the arrest and the sentence. In addition, they announced that the trials of those involved in violent acts and looting of stores will take longer, and their culprits will be imposed the most severe penalties, which according to the Penal Code could be up to 20 years in prison.

Trials for public disorder are announced in avalanche, and the authorities must now decide whether to apply a strong hand without distinctions and exemplary sentences, or to loosen up with those who simply peacefully joined the protest and those who were arrested for recording the incidents. Everything indicates that the latter are quite a lot, as in the case of the cameraman Anyelo Troya, one of the authors of the video clip for the song Patria y vida, sentenced to one year in prison on Wednesday. What is happening has opened a debate on social networks — little by little the internet on mobile phones has been reestablishing itself—, and from Facebook the renowned actor Luis Alberto García put his finger on the wound: “Know that every Cuban who Condemn them to spend time in prison, without having committed vandalism and only having publicly and peacefully manifested their dissatisfactions and beliefs, they will be their staunch enemy for life. And with them and them, their parents, children, brothers, grandparents, uncles, cousins, friends and even acquaintances ”. The actor urged the authorities to review “those trials that are being made on the run. And the sentences that they are sentencing. Neither bars nor more gall needs Cuba ”.

Despite the barricade positions, and the existing polarization between those who defend the “right of the revolution to defend oneself” and call for a strong hand, and those who consider the trials part of the repression to silence the manifestations of discontent and denounce police abuses to mansalva, a ray of light was opened thanks to the initiative of the playwright Yunior García, one of the leaders of the protest before the Ministry of Culture on November 27, who was arrested in the July 11 demonstrations.

García wrote an open letter to Silvio Rodríguez requesting dialogue to expose him to the positions and demands of the young generation he represents. He received it immediately. “We were able to confront our differences with the utmost respect and we preferred to focus on our coincidences. Nor did we waste time discussing issues that none of us can resolve in practice. We focus on how to contribute, right now, to the good of Cuban society, as a whole, “said the playwright after the meeting.

“Today’s match was not about a fight to find a winner. It was about Cuba. And I think we came out of there with the certainty that real changes are needed, driven by non-violent means, without interference and where no Cuban feels excluded, ”he said. For his part, Rodríguez, who these days has focused on denouncing the manipulation from social networks and the role of the United States seeking to aggravate the situation in Cuba, in line with the official position, considered the meeting with Yunior “good” and “fraternal”. “For me the most painful thing was hearing that they, as a generation, no longer felt part of the Cuban process, but something else. They explained their arguments, their frustrations, “said the singer-songwriter. And he added: “There must be more bridges, there must be more dialogues, there must be less prejudice; less desire to hit and more desire to resolve the mountain of pending economic and political issues; less habit of listening to those who speak the same thing with the same words, decade after decade, as if generations did not also come with their own words and illusions ”.

Rodríguez said that the playwright asked him “to call someone” and to ask for “amnesty for all prisoners.” “I don’t know how many prisoners there will be now, they say hundreds,” said Rodríguez, but picked up the glove and demanded freedom “for those who were not violent.”

García, who is currently under house arrest, insists that inclusive spaces must be opened in Cuba to get out of the serious crisis that the country is going through, something that Silvio Rodríguez agrees on. “We agree on a project (in due course it will be made public) that could serve for the beginning of a truly plural, inclusive, civic, respectful and broad debate that finds consensus among the diversity that today characterizes us as Cubans,” said García. , and many on social media applauded both.

The trials will continue in the coming days, it is necessary to see what sanctioning line the prosecution will finally impose, but in the midst of this situation, the United States announced that it will adopt sanctions against those “involved in repressive acts”, that is, more noise in the system. “Instead of loosening tensions, easing the embargo and favoring an exit, Washington increases the pressure, to which they will respond here by enlisting once again,” says a young Cuban who is very critical of the government, but who, he observes, as long as the The “myopia” of the White House makes the solution very difficult.