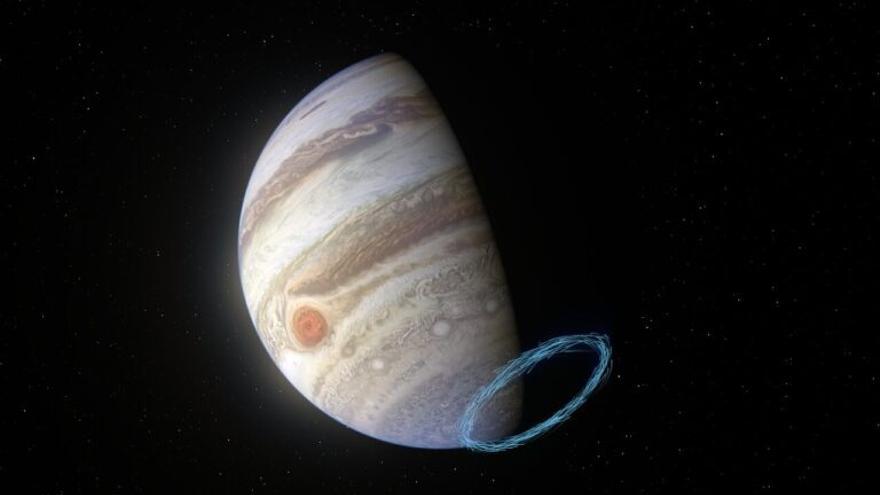 Winds in Jupiter’s stratosphere can reach supersonic speeds of up to 1,450 kilometers per hour, more than triple those of the strongest tornadoes on Earth.

It has been discovered by a team of astronomers, led by Thibault Cavalié, from the Bordeaux Astrophysics Laboratory (France), who used the ALMA (Atacama Large Millimeter / submillimeter Array) network of telescopes to analyze in detail the aftermath of a spectacular cosmic episode happened almost 30 years ago.

In 1994, a Kite dubbed Shoemaker-Levy 9 (SL9) collided with Jupiter, providing the first direct observation of an alien collision between objects in the solar system.

Two years earlier, the comet had split into 21 pieces, some of them up to two kilometers in diameter, which ended up colliding with the gas giant at a speed of 60 kilometers per second.

The energy released by those impacts produced new molecules in Jupiter’s stratosphere, where they have been moving with the winds ever since.

Spectral footprint The reflected radiation as a function of the wavelength (spectral fingerprint) of these molecules, which can be detected by powerful radio telescopes, allowed astronomers to establish the speeds of movement of gases containing molecules.

In this way they were able to measure the jet currents of Jupiter, which are the powerful air flows that occur in its atmosphere (as it happens on Earth).

The speed of Jupiter’s jets not only exceeds that of the strongest winds on Earth, but also doubles the maximum storm speeds that are reached in Jupiter’s Great Red Spot, the largest anticyclonic vortex on the gaseous planet.

Those jets from Jupiter would be like a weather beast unique to our solar system, researchers note in a release, since they behave like a giant vortex with a diameter of up to four times that of the Earth and about 900 kilometers high.

This animation of Jupiter was created from actual images taken with the NASA / ESA Hubble Space Telescope. In the southern hemisphere of the planet, the impact sites of the fragments of Comet Shoemaker-Levy 9, which fell on Jupiter in 1994, can be seen in dark brown. Credit: ESO / M. Kornmesser, NASA / ESA

Wind patterns Jupiter is the fifth planet in the solar system, located 600 million kilometers from Earth, and one of the brightest in the night sky. It is part of the so-called outer or gaseous planets.

It is surrounded by moving gas clouds that give it a chromatic appearance because of their red and white bands: these clouds help astronomers track the winds in Jupiter’s lower atmosphere.

At the upper end of the atmosphere, near Jupiter’s poles, astronomers have also been able to study other attractive phenomena, the auroras, consisting of spectacular glows associated with strong winds.

The new research has reached into Jupiter’s stratosphere, located between those two atmospheric layers, to measure what has never been achieved: the patterns of winds that occur at those latitudes.

There it is not possible to measure wind speeds using cloud tracking techniques because in that part of the atmosphere Jupiter does not have clouds.

Like a train However, astronomers got an alternative help in making these measurements: Comet Shoemaker-Levy 9.

They used 42 of ALMA’s 66 high-precision antennas, located in the Atacama Desert in northern Chile, to analyze hydrogen cyanide molecules that have been moving in Jupiter’s stratosphere since the comet’s impact.

The ALMA data allowed them to measure the Doppler effect – small changes in the frequency of radiation emitted by molecules – caused by winds in this region of the planet, the researchers note.