If we look for Sarhua on a map, we have to get very close to be able to identify that the center of this Peruvian district located in the Víctor Fajardo province, in the Ayacucho department, has more than 16 blocks.

But despite its smallness in the middle of the mountains in southern Peru, this town flourishes thanks to its culture and “created a type of art that only exists in Sarhua”, assures the art historian Gabriela Germana.

It refers to the Tablas de Sarhua, a centuries-old tradition that the Peruvian government declared Pcultural heritage of the nation in 2018 and consisting of painted logs between two and three meters long that originally showed the activities of the inhabitants of the houses.

Over the years, these tables became expressions of the community’s traditions and also its concerns. 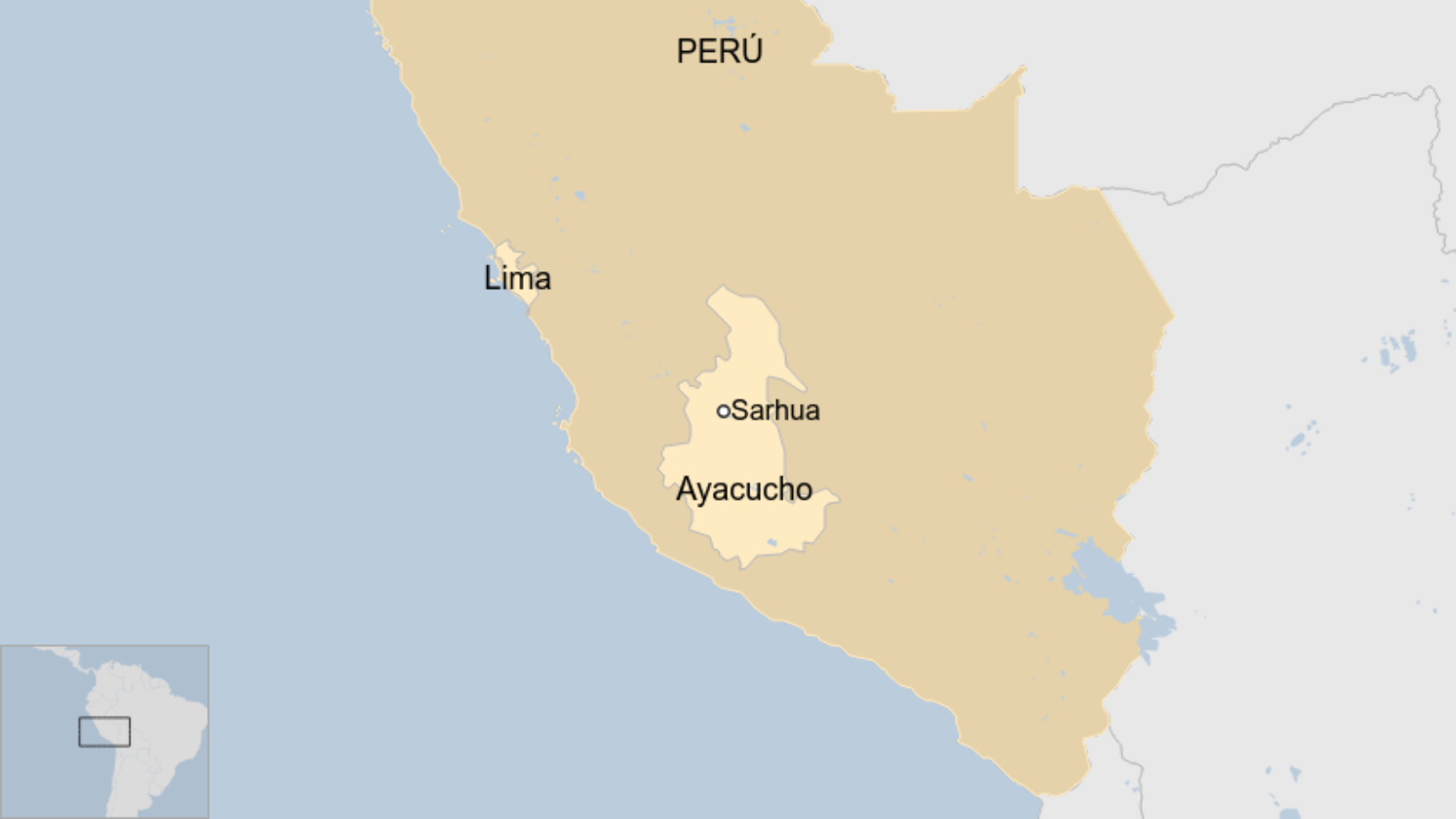 Within the framework of the digital version of the Hay Festival Arequipa, at BBC Mundo we spoke with a Peruvian art historian and an artist to explain what the Sarhua Tables are and what they mean.

Sarhua is located in southern Peru. Although it is separated by about 345 kilometers in a straight line with Lima, reaching Sarhua is neither easy nor fast.

En route it can take up to 10 hours. Therefore, it is convenient to get to Ayacucho by plane and from there about three hours by road to Sarhua.

The oldest news about the Spanish domination over these lands dates from 1574, with the visit of Juan Palomares to establish boundaries between the towns that already belonged to several Spaniards, but in which there were already indigenous settlements.

And the most widespread theory about the origin of Sarhua’s name is that it comes from the Quechua word “sarwi”, which means “remains of devoured animals“.

“There is a legend that indicates that before the founding of the town, there was in the place of the current main square a lagoon surrounded by thick vegetation where wild animals lived, such as the puma, which devoured other animals and hence the name “Gabriela Germana tells BBC Mundo.

Sarhua was founded as an indigenous community in the middle of the Spanish colony, so Catholic evangelization and the construction of its colonial church were mixed with pre-Columbian religious festivities, so the community is nourished by a marriage of celebrations.

The Tables of Sarhua show precisely that synergy between Spanish and local religious culture, and are a gift between compadres (or godparents) within a community.

“Tables are part of the Apay Table ceremonykuy that is done when they make a new house. They build a roof and the compadres hand over a board from the owner of the house that is placed on one side of the gabled roof on the side of the beam, “explains Venuca Evanán, an artist from the Tables of Sarhua.

The table will show the family that is receiving it as a gift, and visual reading is from bottom to top.

That is, in the lower part there is a text where the dedication of the godfather is. In the next painting appears a Catholic saint who is generally the Virgin of the Assumption, who is the patron saint of Sarhua.

And then all the family members come in order of importance. And in the last painting, there is usually the Sun, which is an Andean deity, Germana details.

The tables represent between 7 and 8 scenes depending on the length of the log and the number of people who collaborate in the construction of the house.

And why give a Sarhua Table?

“To wish prosperity, blessings, good vibes for the home and is given with songs, with more gifts, in the Apaykuy Table ceremony. And the family will receive it and they will eat, drink, dance and celebrate around the house, “says Venuca Evanán.

It is not clear when and how the tradition of the Tables of Sarhua began. Although there are different hypotheses.

“Some researchers say that they are related to some Inca paintings, but I do not agree. I think this originates from colonial times when a figurative tradition comes to the Sarhua area. Before in Sarhua things were not represented with drawings and here you see people doing things “, says Gabriela Germana.

The historian highlights that the Sarhuinos adapted the art of the colonial era.

“Sarhua has a very beautiful colonial church, with paintings on its walls and ceiling. So it could be linked to that type of art but adapted to the needs of the residents,” adds Germana.

“So they invent this new object that is a type of art that only exists in Sarhua. We have not found a similar art in another population neither Andean nor in another part of America “says the specialist.

The oldest Sarhua tablets that are preserved to date are from endalit’s from the 19th century, but due to the natural materials with which they are made, which are colored wood and earth, and which hang from the thatched roof in an area with a lot of rain, it is difficult for these boards to last long over time.

The history of the artist Venuca Evanán is closely linked to the Tables of Sarhua.

“My parents are Sarhuinos but I was born in Lima. I was trained here but I was always in relation to the Sarhuina culture. My parents are the diffusers of this art in the city and in different parts of the world,” she says proudly.

Sarhua still maintains many of the centuries-old customs with its traditional festivals such as carnivals but also with Catholic celebrations such as the feast of San Juan, and its inhabitants continue to speak Quechua and wear their colorful Sarhuino costumes daily.

But being a town that lives from livestock and harvest, many young people left the place in search of better opportunities.

“In the 60s many Sarhuinos emigrated to large cities, first because of the economic crisisbecause the sowing and the harvest did not give a living, “describes Germana. This is the case of Venuca Evanán’s parents.

“Then many sarhuinos, as from other places in Peru, they emigrated for the internal war, especially the rural populations that were the ones that suffered the most. Many were left in the middle of the terrorists and the response of the state. Many innocent people died or lost their homes “, details the historian.

Between 1980 and 2000 armed groups established in the center and south of the country sought to remove the democratic government system. According to the estimate of the Truth and Reconciliation Commission of Peru, about 70,000 people died in the crossfire, mostly peasants.

At that tumultuous moment, the artists decided to represent not only the ideal life in Sarhua, but also the problems that were afflicting the community byviolence.

Those Sarhuinos who moved to Lima decided to start a new art form by including women and children in the tradition and producing smaller boards so that they could be marketed.

And the art of the Tables of Sarhua began to show other realities and ideals.

“Sarhua’s tables are a way of expressing myself. I express my proposals, my ideas, as a woman, daughter of Sarhunians. It is a necessary element, typical of something that I am inheriting and I want to give it continuity through the transmission of knowledge that I obtained in practice “, Evanán describes.

Like her parents did, she captured new themes on the charts like the pandemic and the claim for violence against women in general and specifically in Sarhua.

“By tradition, the Sarhua tables were painted only by men and my father had only female daughters, so I learned the art of tables when I was very young and I began to find my voice. I want to capture my life, through painting, I want to reflect what Andean Sarhunia woman lives in the city, “he says.

This article is part of the digital version of the Hay Festival Arequipa, a meeting of writers and thinkers that takes place virtually between 2October 8th Y 8 from November 2020.

Now you can receive notifications from BBC Mundo. Download the new version of oura app and activate them so you don’t miss our best content.