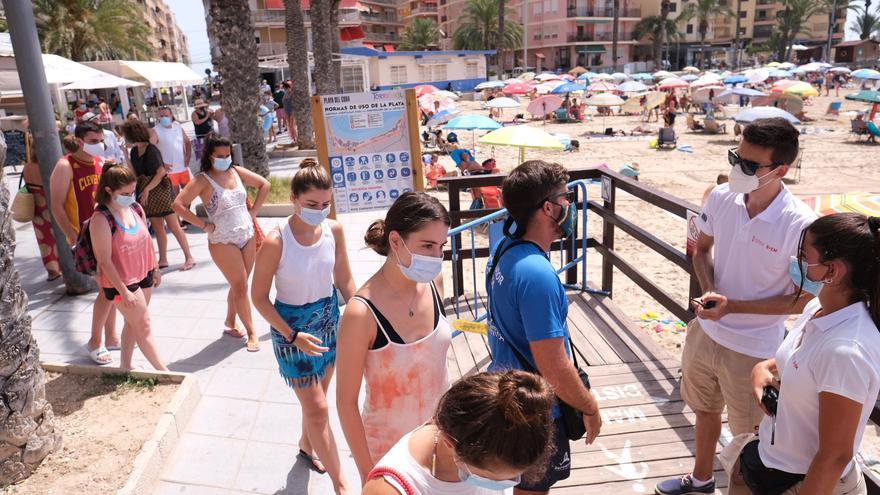 July. Seven in the morning. Playa del Cura. It is one of those videos that anyone makes with their mobile, they are posted on social networks and within a few hours it already has thousands of reproductions. It is one of those videos, yes, another year, of the summer in Torrevieja. Images must be contextualized. The Cura beach is the most central of the municipality and with 375 meters and a maximum width of 27, which knows little, the smallest and most crowded throughout the day. It is time in addition to sanitary restrictions and the space must be cleaned, conditioned and limited each day for its use. There are contracted rescue and first aid personnel, covid controllers of the Generalitat, more covid controllers hired by the municipality … not in vain does the Torrevieja City Council boast in qualifying it as “One of the safest beaches in Spain”, And if it is per square meter, surely yes.

Contextualized the video, let’s go back to the beginning of this story. July. Seven in the morning. Playa del Cura. Hundreds of people with their removable beach gear patiently queue up on the promenade waiting for the beach to “open” to the public once the plots have been delimited with a grid of ropes. And when the starting gun is fired. the people taking the beach by storm. Racing, rushing to get to the positions closest to the shore (the most demanded by the way). Some who cannot wait to access the wooden walkways and jump from above. Others who stumble, dragging as best they can the carts with the saddles, the umbrella and everything that is needed to get through the day. Others who place the ropes of the plots to their liking, perhaps gaining a few more inches of sand to the neighbor (less savvy) … Much pensioner public, between 65 and 70 on average. The kind that has all the time in the world, but it seems like it doesn’t. The one that makes the beach its main hallmark for free. Of those who appropriate a space for everyone because “they pay for their house in Torrevieja.” The pictures say it all.

In the case of Torrevieja, the scenario is conditioned by the municipal decision to divide the beaches. Something that the rest of the municipalities of the province have ruled out – with which the disputes with an umbrella for the first line have also returned early. The municipality is spending 1.1 million euros in three months on this service contracted directly and that allows it to have 150 beach controllers who daily extend and remove the parceling ropes, carry out disinfection tasks and control access . Another problem that this system generates, especially on this beach, is the lack of rotation. In other words, the one who achieves a hole spends the morning

It is the beginning of any day of vacation in Torrevieja, Mecca of residential tourism where tourism always returns summer after summer because it is residential. It is time for restrictions, yes. Then the queues continue during the morning in any supermarket, at the doors of the banks, at the bus stops, and in the evening at the terraces of the ice cream parlors, in the pizzerias, in the restaurants – despite the fact that the terraces occupy Now, without the City Council being affected, to green areas – in the city center or in traffic jam mode, at the entrances to the port car park. It’s another summer. And as in other summers, the city of Torrevieja is again promoted in spite of itself with the “likes” of videos that are at the antipodes of the advertising image of the municipality with the pink lagoon of sun and salt, lonely coves with relaxing or the trails flanked by eucalyptus trees from the Natural Park. As many people from Torrevieja say with a small mouth (so that they are not heard much) Well, what a tourism!