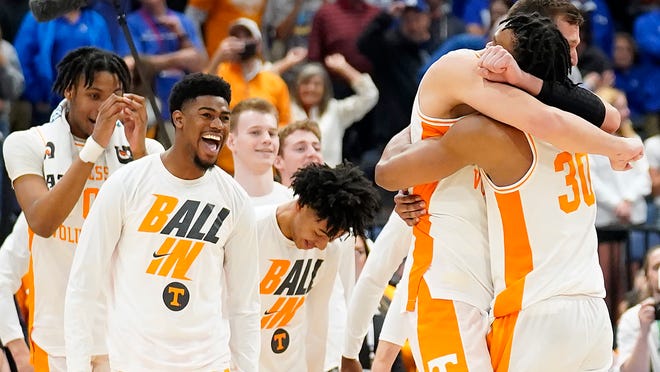 The No. 3 seed Wildcats fell 69-62 to No. 2 seed Tennessee in the semifinals Saturday, ending hopes of possibly playing their way into a No. 1 seed in the NCAA Tournament this weekend. Now, Kentucky heads into Selection Sunday as a likely No. 2 seed waiting to learn if it will be seeded high enough on the S-curve to play its first and second games in Indianapolis.

After the two teams split home blowouts in the regular season, Tennessee was able to take control early in the semifinal game despite a partisan pro-Kentucky crowd in Amalie Arena.

The Volunteers never trailed again after taking a 7-4 lead on a Josiah-Jordan James 3 just more than three minutes into the game. By halftime, Tennessee had stretched its lead to 11 points.

Tennessee led by 14 with 8:50 left in the game before Kentucky used a mini 6-0 run to climb back into the contest. After a Tennessee timeout, Volunteers guard Kennedy Chandler scored back-to-back baskets to slow Kentucky’s momentum.

The Wildcats had one last run in them, pulling within three with 1:31 left in the game, but Kentucky was unable to come down with a rebound of a late-shot clock heave from Tennessee on the following possession. Tennessee guard Santiago Vescovi converted 1 of 2 free throws after being fouled on the rebound.

Kentucky missed two 3-points attempts on the following possession with a chance to pull within one.

“There were three plays back to back to back,” Kentucky coach John Calipari said. “You can’t win national championships on plays like that. You cannot because a good team will make you pay just like Tennessee made us pay. You can’t, and they were our mistakes.”

Also Read  The Moskva, sunk off Ukraine, served in wars hot and cold

As bad as Kentucky can play

The quality of competition has to be taken into account, but future NCAA Tournament opponents saw the blueprint for an upset of the Wildcats Saturday.

Tshiebwe, who has already landed one National Player of the Year Award, was limited to eight minutes in the first half due to foul trouble. Kentucky’s normally strong 3-point shooting disappeared with the Wildcats converting just 2 of 20 shots beyond the arc. The Wildcats were limited to just 10 second-chance points.

Whether a team without Tennessee’s elite defense can force Kentucky into a similar performance is questionable, but Saturday was certainly not the type of performance that builds confidence heading into the tournament that counts.

“I think we just have to stay focused and locked in, be ready for the next tournament,” Tshiebwe said. “I’m pretty confident with my teammates, with everything. This was kind of an off day for us. We didn’t really make a shot. We still have our confidence, and we’re going to be ready next week.”

John Calipari used his oft-repeated line about his teams playing so well in conference tournaments because he places so little emphasis on them this week, but a combination of factors have made that statement less true recently.

After winning 6 of 9 SEC Tournaments to open his UK career, Calipari is now in a four-year drought without reaching the championship game. Even if you throw out 2020, in which the tournament was canceled after the first night before Kentucky played due to the COVID-19 pandemic, it’s now three straight tournaments in which UK lost before Sunday.

No one is questioning Kentucky’s dominance in the event. The Wildcats have won 31 SEC Tournaments. No other team has won more than seven.

But this is just the third time since the first SEC Tournament in 1933 that UK has gone three consecutive tournaments without reaching the final.

Looking ahead to Selection Sunday

Losing to a team as good as Tennessee on the eve of Selection Sunday should not drastically change Kentucky’s NCAA Tournament seed, but the Wildcats chances of earning a No. 1 seed probably ended with the defeat.

There is no reason to think Kentucky will fall off the No. 2 seed line, but how the committee ranks the group of Kentucky, Duke, Auburn, Tennessee and Purdue will have implications for where the Wildcats play in the tournament.

Greenville, South Carolina is the closest first-round site for Duke, Auburn and Tennessee, but only two of those team can play in that pod. The third could go to Indianapolis, Indiana, if Kentucky and Purdue have not already filled the two spots in that pod.

Perhaps the most interesting debate of that group is how to seed ranked Kentucky and Tennessee against each other. UK entered the day with a significant lead in the computer rankings (No. 2 to No. 11 at KenPom.com and No. 4 to No. 8 in the NCAA’s NET metric), but Tennessee now has the edge in Quadrant 1 wins (10 to 9) with a chance to add another against Texas A&M Sunday. The Volunteers were 2-1 against Kentucky this season. Neither team has lost a game outside of Quadrant 1.