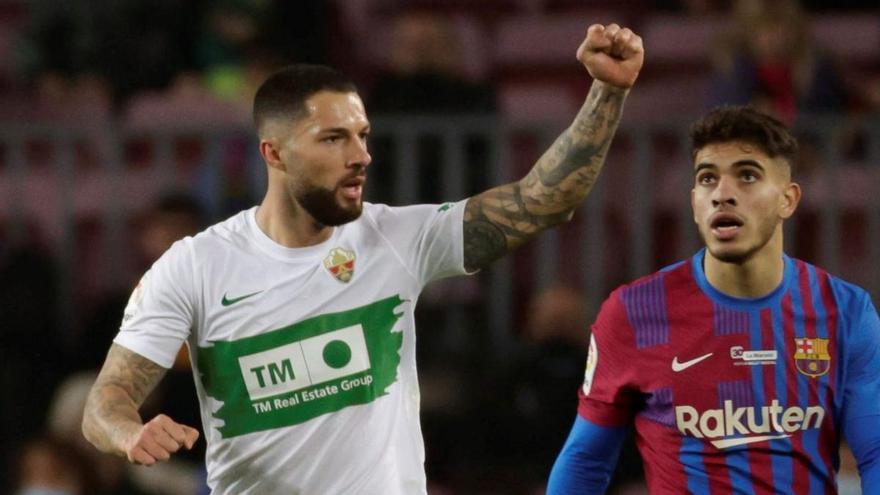 Green does not fool anyone, as I said Nino. It is in training and, above all, in matches where the football players of a squad earn their ownership or substitution. In Elche, since the arrival of Francisco to the bench, the starting eleven has been practically the same and it was the one that came with momentum after the draw in Pamplona, ​​against Osasuna, with the interim leadership of Mantecón and Pablo Manusovich.

With the new technician, there have only been small variations conditioned by small details. Against Valencia Barragán played with a changed leg due to the injury of Mojica. And last Saturday, at the Camp Nou, against Barcelona, Josan occupied the right wing instead of Tete Morente.

The meetings are progressing and the meritocracy is placing each one where it belongs. There are footballers, like Tete Morente, Gerard Gumbau The Pears Milla, that they are gaining the confidence of the coach and that they are enjoying many minutes, although some such as the midfielder and the Catalan forward have not yet been starters.

On the other side are players who do not finish starting, despite enjoying a multitude of opportunities, such as Marcone; or others who have lowered their performance and who do not show continuity at the high level that they have shown in some phases of the championship, such as Fidel, Mascarell or Lucas Pérez. Without having a poor performance, as it has been the case of the Argentine, the Huelva, the Canarian and the Galician are not the same at the beginning of the season.

Gumbau is knocking on Francisco’s door to be the starter. | SONIA ARCOS / ECF

This situation makes Francisco consider starting to make changes in the resumption of the competition, in the vital match on January 2 (4.15pm), at Martínez Valero, against Granada. Gumbau and Pere Milla are knocking loudly on the Almeria coach’s door to be headlines. And Tete Morente has won back to the starting eleven after being a substitute at the Camp Nou.

Gerard Gumbau has played all three league games with the new coach, with whom he coincided at Girona, but always starting from the bench. Against Cádiz he replaced Marcone, in the 64th minute, with 1-0 on the scoreboard and improved the center of the field, giving the assistance to Josan at 3-1. In Mestalla against Valencia he came out in the 61st minute for Fidel and the team improved in the engine room. And last Saturday he jumped to the Camp Nou at halftime for Marcone and his presence was key in the improvement in midfield. It could be the novelty against Granada occupying the position of Marcone.

Pere Milla is knocking on Francisco’s door to be the starter.

Tete Morente started and played a prominent role against Cádiz, scoring 2-0. In Valencia he offered a discreet performance and was replaced at halftime by Pere Milla. But at the Camp Nou he was one of the triggers of the Elche team. He scored 2-1 and gave the center in 2-2 to Pere Milla. If he is in full condition, it would be strange if he did not start against the Granada players.

For his part, Pere Milla has also earned Francisco’s trust. He is playing more on the left wing than as a forward. Against Cádiz he left in the 63rd minute for Fidel and gave another air to the attack. The same happened at Mestalla when he replaced Tete Morente at halftime. Against Barça, he came out for Fidel again in the 60th minute and had more presence on the left wing. In addition, he scored the tie at two. If the Elche coach bets on a more offensive eleven against Granada, the Catalan attacker could have his chance.

On the opposite side is Marcone. The Argentine played a neat match against Osasuna and against Cádiz. But against Valencia and Barcelona he was lost again. He has started in all three games with Francisco, but in all of them he has been changed. In the 64th minute against the Cadiz, in the 61st at the Mestalla and at halftime at the Nou Camp.

Fidel has been another of the starters in the last three stakes that has not lasted more than 65 minutes on the field. It complies, but it is lacking continuity.

In a similar case are Mascarell and Lucas Pérez, who have significantly lowered their performance after shining in their first matches.