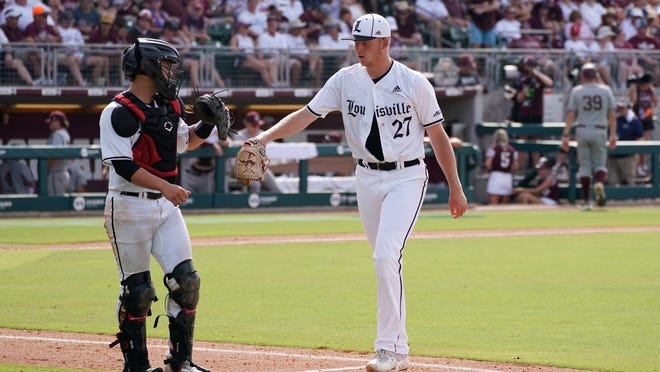 No. 5 Texas A&M rallied from a two-run deficit for the second time in less than 24 hours and eliminated the No. 12 Cardinals from the NCAA Tournament with a 4-3 victory.

With the win, the Aggies swept the best-of-three series, improved to 5-0 in tournament play and became the first of eight teams to punch a ticket to the College World Series.

Louisville fell to 42-21-1 overall with the season-ending loss.

Game 1 recap:Louisville baseball on the brink of elimination after walk-off loss vs. Texas A&M

Missed opportunities at the plate and command issues on the mound loomed large yet again for U of L in Game 2 of the College Station Super Regional.

The Cardinals stranded 10 runners on base, including three in the bottom of the third when senior centerfielder Levi Usher laid down a two-out squeeze bunt with the bases loaded and the game tied 2-2. When asked about the decision to bunt instead of swing away, coach Dan McDonnell took responsibility for what happened but said it was his player’s call to make in the moment.

“I think Levi was just trying to manufacture something,” the coach said. “I always feel responsible … you just want to help them and guide them.

“These kids have a lot of freedom to do what they want. I don’t want to throw Levi under the bus, but as a coach you always feel responsible, you know, (for) guys to have quality at-bats, and it just didn’t work out.”

The Cardinals still had one more chance to tie or win the game, however.

Down 4-3 with its season on the line in the bottom of the ninth, Louisville got the tying run aboard when sophomore shortstop Christian Knapczyk led off the frame with a single to centerfield, his fourth hit of the afternoon.

That’s as far as Knapczyk would get on the base paths, though. Senior third baseman Ben Metzinger worked a 10-pitch at-bat that ended in a strikeout, junior designated hitter Dalton Rushing nearly won the game with a drive to left-center that was caught on the warning track and sophomore catcher Jack Payton struck out swinging to end the ballgame.

“We just couldn’t get guys off first. It was beyond frustrating,” McDonnell said. “We had 13 hits to their five, and we had a lot of good at-bats. We had a lot of guys on first base. We tried everything.

“If (Rushing) hit the ball a little bit higher into the wind, we would’ve had a walk off,” he said. “We would’ve won that game by a run. That’s the fine line between winning and losing. That’s not taking anything away from Texas A&M, because they earned it, but we were that close. That close to coming in here and winning those two games.”

Phillips had his off-speed pitches working early and cruised through the first two innings with four strikeouts. Then, the control issues that plagued U of L in Game 1 of the series resurfaced in the top of the third.

Texas A&M sandwiched a walk around two singles to load the bases with no one out. Phillips walked left fielder Dylan Rock, the Aggies’ leader in home runs and RBIs, to bring a run around. The game-tying run scored on an sacrifice fly to left-center from designated hitter Austin Bost

Targac’s homer to lead off the sixth was the last pitch Phillips threw Saturday afternoon and came during the Aggies’ third trip through the order against the sophomore lefty. He was replaced on the mound by junior righty Ryan Hawks.

Louisville had Hawks stirring in the bullpen early during Game 2, but McDonnell said that he didn’t feel comfortable turning the game over to his relievers until Phillips surrendered the game-tying hit.

“I give (Phillips) a lot of credit,” the coach said. “He gave us a chance. I mean, if we got to go to the bullpen in the third, I don’t know if we have a legitimate chance.”

In the bottom half of the frame, Louisville got a leadoff walk from senior left fielder Cameron Masterman, who advanced to second on a two-out single from senior first baseman Ben Bianco. Both runners were left on base, however, when Knapczyk grounded out to short.

The Aggies’ pounced on the Cardinals’ missed opportunity in the top of the seventh, their one-out rally starting when Hawks plunked third baseman Trevor Werner. A single from first baseman Jack Moss sent Werner to third, and he scored the go-ahead run on a sacrifice fly off Rock’s bat.

After missing the NCAA Tournament in 2021 for the first time in 10 years, McDonnell and his players viewed the 2022 campaign as redemption tour, a time to “reset the standard” of Louisville baseball.

With a roster lacking in postseason experience, the Cardinals spent much of the season ranked among the Top 10 teams in the country, won the Atlantic Coast Conference’s Atlantic Division and played their way to the program’s ninth super regional series.

A return to Omaha, however, will have to wait.

“We’ve just got momentum,” McDonnell said. “(A) body in motion tends to stay in motion, so we’re moving in the right direction. We just got to keep that momentum going.

“I feel better today than I did a year ago. We learned a lot after the way we finished last year. We went back to the drawing board, and we’re better off. We’re better coaches, our program’s better and I think the future is very bright. I’m just very optimistic.”