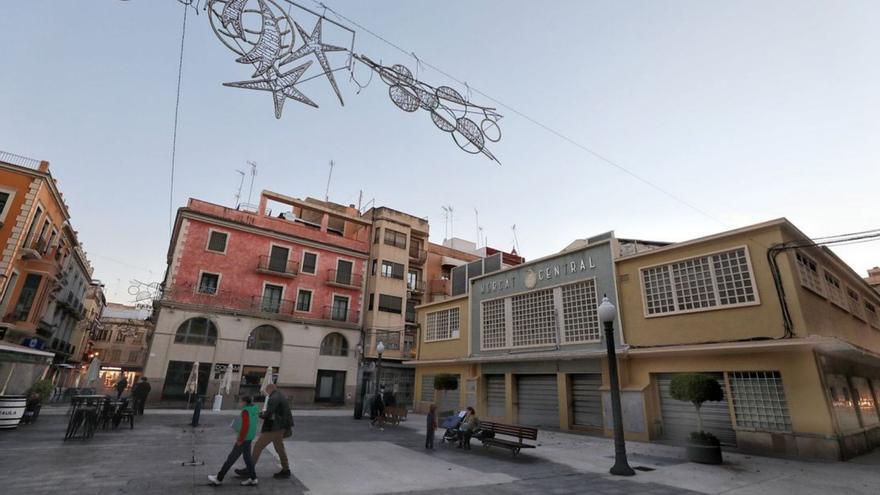 Total sinister. Good times of punchy, punchy music I spent listening to that group a few decades ago. Worse, honestly, those that make me find out about certain facts that the populist drift and so much political correctness into which we are immersing ourselves are bringing us home. And I refer this time, specifically, to the surprising architectural interest that the Central Market of Elche has aroused in the world, to the point that Icomos, which we will always thank for the services provided in initiatives of another substance and greater consensus, intervene in the middle to safeguard the local building heritage. Not only has he come out in defense of the Mystery, a piece of an immaterial nature (you will tell me how something as measurable as road traffic affects the singers of the Capella in the Casa de la Festa and inside the Basilica of Santa María , that I need to listen to him again in case I can understand and overcome my state of shock), but now, his concern also reaches the material scope of the area, closing the circle: the “Icomos”. This entity seems to be a new holy spirit that illuminates the chosen ones by crowning them with fire or, cloning the doves of our beloved Municipal Park, adding them to the dovecote from which everything can be seen.

Let’s analyze what happened, because it would be more appropriate to say that the Icomos has been put “in the middle.” The insistent pressure comes from groups of people from Elche who express their opinion and operate on our Heritage in a somewhat debatable way, in my opinion. They constantly raise to the heights of the media and social networks, conspiracies that, very postmodernly (and not scientifically, therefore), end up wanting to turn them into truths. But they are not. Of course, if they keep repeating them many times, as the prevailing relativity in the cultural discourses of our time is imposing, they will be. And the populace will be imbued with such goodness, we will thank the heroes of the resistance for the sacrifice and we will cry out for mercy for all that existed before us. At this rate, whatever it is. Therefore, I am going to try to stop in my tracks the euphoric conviction of a few to openly say what almost all of us think, although we have not yet told the professor of the Complutense of Madrid, which is the entire body of Icomos in our country. As they read it. The soul, in the case that concerns us, some colleagues of mine who have all my personal appreciation, but know very well that I do not agree with their vision or with the process they have generated.

The Mercat d’Elx building is a second solution that Don Santiago Aracil must give at the time, the architect who had also designed the previous and first project, which was a large open roof with a central portico and two large overhangs ( In my opinion, it would have been more worthy of conservation and more versatile in its rehabilitation than the current market). In the first place, it was an operation marked by pushing the capacity to occupy the existing space to the limit, with the consequent narrowness that we suffer in the side streets and, oh, palm tree! Advancing the façade to Plaça de la Fruita in front of the axis of Carrer Major de la Vila, which should have been avoided due to perspectives between landmarks of the city. In addition, it is a two-storey building with low free height, one of which is below street level, of a constructive quality far from remarkable and that, although I recognize it as a sobriety of quasi-proto-rationalist lines despite the marked gestures on the facades and having used paving stones in the gaps as a somewhat innovative material in Elche in the 1950-60s, selling this building as a construction of considerable architectural value does not obey the truth under any rational and knowledge point of view . And period.

Therefore, there are other reasons. They may be of a sentimental nature (very widespread in the people of the poble) or political (without a doubt, the seed) or, merely, coming from an obviously radical historicist position as has been verified in the last decade, disguising their urban voluntarism. -economic-social-sustainable (read direct intervention in licenses legally granted in the Central Market, on the facade of Riegos el Progreso to Plaza Sindicatos or, the last, of an entire neighborhood planned in Les Portes Encarnaes) as something unavoidable due to quasi gravity divine, as commented. I deeply disagree. And time is not proving them right, on the contrary despite the fact that people adapt to the environment, like animals that we are. Now the mantra is that the current building of the Central Market is not touched. It is rehabilitated. Well intentioned in the best of cases, because I assume that in conscience they will consider that all this is a necessity for the city of Elche, in my opinion it is being a source of conflicts, paralysis, lack of overall vision, mistaking priorities and, above all, handcuff the evolution of the city.

These are moments that we live where positive discrimination floods everything until we fall into the same error against which said concept was born, acting like what we all considered bad at the time and end up substituting a wrong doing for another equal, but of opposite sign. Even in urban planning. And in those, the City Council has not wanted to delegitimize these groups by simple hypothetical affinity or fear of what part of their electorate will say to the dictation of the green slogans that surround them, most of which are truly oblivious to the problems they pose to us and They do not care, except, yes, that an idea of ​​a party crystallized in a tender with another in command. As simple as that. And of those sands, these muds.

The reality, at least, has an implicit characteristic and that is that it is evident, that is, it can be seen, and what all these civic movements, restricted to a maximum of one or two hundred true activists, have achieved is, really, paralyze the center of Vila Murada for a long time. Too. And although due to the existence of some ruined Arab baths or the remains of some war shelters that were disabled at the time, or whatever, they are not able to see that they have left the area as a site, as if it had been bombed. In truth (there have been so many archaeological tastings that I do not remember them all) and all this in pursuit of a search for the past that does not treasure progress or happiness, as I have been able to verify in the place, a place that I have inhabited and inhabit and, therefore, I can compare in its different phases. The reality, however embarrassing, has been a disastrous process. And do not hold an ideas contest regarding what could be proposed to replace the existing building, or simply remove the current building and leave a large public space, which is what I would do finally and after all this incredible and indigestible process, it will be another failed decision of some leaders exhausted and led to the misunderstanding by fear of the polls. Despite the reality.

And one final note: watch out for the location of the possible new Congress Center-Auditorium, which is being combed…! Total sinister.