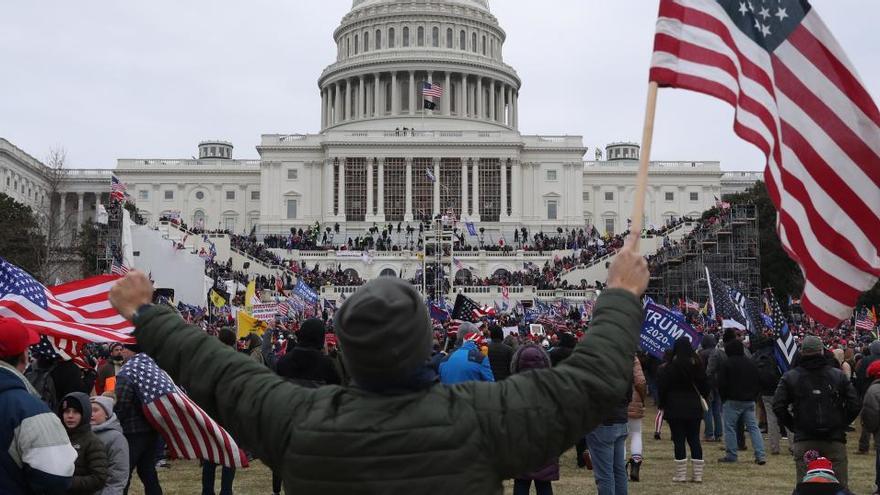 There is nothing more grotesque than seeing the head of state of a country that has always boasted of exporting democracy to the world call on his fanatical supporters to rebel against those who fairly won the elections.

And to do so under the pretext that they were elections “stolen” from the authentic American people – that is to say: the white supremacists – by politicians eager to turn God’s chosen country into a socialist dictatorship.

A Republican president who, despite his flagrant abuses of power and his blatant lies, has been the second most voted in history with more than 70 million votes, only behind his Democratic rival, Joe Biden.

The dystopian prophecy published by the American novelist Sinclair Lewis in 1935, in the midst of the European fascisms, under the title “That cannot happen here” seemed to suddenly become reality.

In that novel, Lewis portrayed a politician of whom Trump seems only a carbon copy: his protagonist is a senator from the small state of Vermont named Berzelius Windrip who, based on populism and lies, manages to convince his compatriots that he will return to the country. to lost greatness: Trump’s “Make America Great Again”.

In this work of fiction, Windrip arrives at the White House in 1936 after defeating all his Democratic and Republican rivals and installs a terror regime with a paramilitary force and special courts to get rid of his enemies, forcing many citizens and even his own vice president to seek asylum in neighboring countries.

It seemed hard to believe what we saw happen the other afternoon and night thanks to the television screens: how, cheered by the still president, hundreds of individuals carrying Confederate flags or with the name of Trump took by storm on Capitol before the more than evident passivity of the police.

A policewoman who, when trying to suppress demonstrations of the anti-racist movement “Black Lives Matter”, did not hesitate to use maximum violence, but this time seemed to be there at times almost only as a spectator.

All this while the seditious managed to enter by force in the temple of democracy, and, after interrupting the process of certification by Congress of Biden’s electoral victory and forcing legislators to take refuge wherever they could, they photographed themselves with their mobile phones in the large rooms of the building or in the vacant offices.

There are now less two weeks for the new president to take office, and many are wondering what he will be able to do who still occupies the White House and still does not recognize his defeat, no matter how much he has assured, after the events and the four deaths Wednesday, that “there will be an orderly transition.”

There are even those who wonder if, to avoid last minute surprises by a psychopath, it would not be convenient to resort to the twenty-fifth amendment of the US Constitution, which, among other things, allows the replacement of the president by his second in the case that he is not “capable of performing the functions and obligations of his position.”

The most worrying thing, however, are those more than seventy million Americans who have believed the lies and tolerated Trump’s abuses of power and who will continue to work for the still president or one of the cynical Republican politicians who, like Ted Cruz , they support him take revenge in four years.

As Sinclair Lewis envisioned in his day, alerting his compatriots to the danger of fascism, this can also happen there.