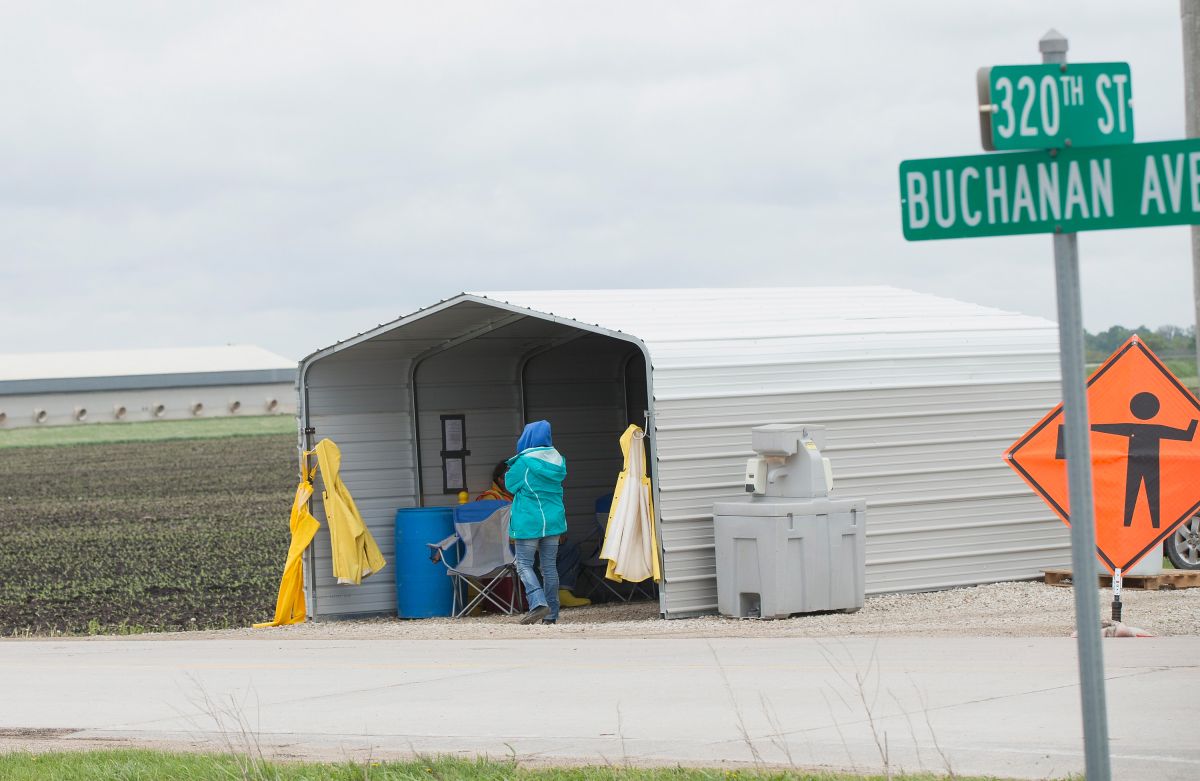 One of the largest poultry plants in the country, located in a rural area of ​​North Carolina, faces multiple complaints from Hispanic workers who say that for months they have been exposed to a toxic chemical that has made them sick.

The situation at the Mountaire Farms facilities, in Lumber Bridge, a small town more than 120 miles east of the city of Charlotte, has forced many of those affected to resign and others to desperately seek help, Ilana Dubester told EFE, the executive director of El Vínculo Hispano.

Dubester and the non-profit organization that he runs in the town of Siler City have received dozens of complaints from Hispanics who work – or who were employed – in this “pollera” who say that four months ago they began to perceive a strong and suffocating smell that was making them sick.

“It seems that there was some kind of contamination that led the plant to increase the use of chemicals. Workers say they were in severe pain, with a sore throat, cough or fainting. Some went to seek medical help or to the hospital. They are hundreds of affected ”, manifested.

According to Dubester, some of the workers complained to the plant supervisors about the situation, as some say they were suffering from lung pain, but apparently they were not taking them seriously: “They did not know what else to do and many started to quit work because they couldn’t take it anymore ”.

“WE FEEL DISCRIMINATED FOR BEING HISPANIC”

“Rosa”, a 47-year-old Central American mother, who preferred not to reveal her real name, is one of those affected by the intense chemical smell and assured Efe that she has complained directly to the supervisors, who only respond to her in English with a: “I know” (I already know).

“I feel burning in my eyes, pain in my throat, tiredness, body ache, dizziness. That chemical reaches your brain, because it affects everything, even the way you sleep, ”said the woman, who indicated that most Latino employees, including several family members who work with her, suffer from the same symptoms.

Central America said she felt “discriminated against just for being Hispanic,” like most of her colleagues, because – she maintains – no one listens to them after four months with the same situation.

However, the mother indicated that she cannot leave work because she has to support her six children, one of whom had to give up his job in the “skirt” due to poor health.

Faced with the avalanche of complaints, the director and founder of El Vínculo Hispano appealed to the North Carolina Justice Center, which on August 19 filed a formal complaint with the state Department of Labor, to investigate and carry out an inspection of the site. .

“There are dozens of people affected, perhaps hundreds, because it is happening in the main production area,” Carol Brooke, a lawyer for the North Carolina Justice Center, told EFE, who warned in the complaint that some workers had even reported “recent deaths at the plant “, Something that” so far “has not been able to corroborate.

According to the lawyer, the current situation in the chicken processing plant continues to be worrying because the strong chemical smell continues, despite the fact that the employees reported that “for a few days there was an improvement.”

“There is a strong odor of ammonia in many areas of the plant,” Brooke wrote in the complaint, which later led to an inspection by the Department of Labor in late August, as confirmed by the entity and whose results have not yet been revealed.

Both Dubester and Brooke point out that, although there is concern about what is happening to their health, there is also fear among employees, who do not want to lose their jobs in their small town where there are not many job opportunities.

Catherine Bassett, director of communication and community relations for Mountaire Farms, categorically rejected the allegations and reports from outlets such as The Counter, which recently ran a lengthy report on how the smell was making employees at the Lumber Bridge plant sick.

“We are not aware that anyone has fainted at work or experienced lung pain,” Bassett said in a statement sent to Efe in which he also denies that the workers are resigned or that any complaint has been made about the smell of through the telephone line that they have enabled to do so anonymously.

“We have the full staff. So any suggestion that some mystery chemical is causing our employees to resign en masse is ridiculous, “the spokeswoman said.

Bassett did confirm that officials from the Occupational Safety and Health Administration (OSHA) visited the plant in August after organizations filed “these false complaints” and noted that they did not “suggest any changes to the operations” of Lumber Bridge, although they are still awaiting their final report.

–Hispano hijacked Amazon truck with employee on board to flee from the police and entered train tracks in NJ
–FBI: Hispanic incited girls to make pornography videos under promises of “modeling” in New York
–Hispanic arrested for abusing a 3-month-old baby in New Jersey