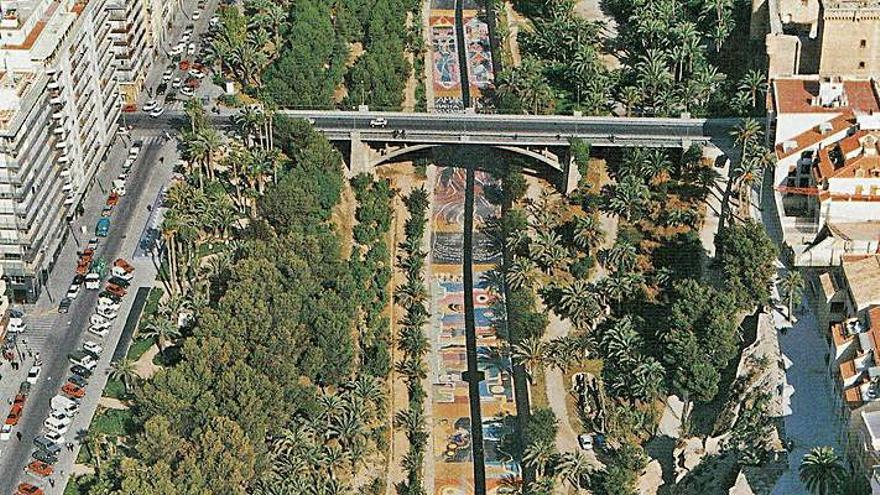 Organized by Esbart Zero…, the international group Kunst for Livet (Art for Life), from Denmark, made up of painters and poets from Denmark, Greenland, Japan, Argentina, Chile, Uruguay, Irack, Bangladesh, France… and the Argentine painter resident in Elche, Jorge Andrada, started the ambitious company. The meandering of the river and the total freedom with which we were going to paint would inspire the name of Proyecto Víbora. The works would be carried out before the August 1991 Festivities. Participation was left open to everyone, keeping in mind that beautiful experience of democratic art that eleven years ago, in 1980, was promoted in Elche with the nice name from Amanida de l’art, where anyone who wanted could participate, in the space set up by the City Council next to the Altamira Bridge. At the same time, the Fira de l’Art was kept in the Plaza de Mariano Antón, only accessible to the artists that appeared on “the list.” The Viper Project placed all artists on the horizontal plane, regardless of any hierarchy. My piece of mural would be made by children, claiming children’s art.

A nice drawing of how Esbart Zero …, from the globe, they imagined the Viper Project JuanLlorens

Another “revolutionary” characteristic of the Viper Project was the stubbornness of giving the city the entire mural, without touching the treasury. The El Peix, Pepe and Ramón Agulló paint manufacturers from Elche would produce the paint for free, their suppliers, such as BAYER, Comercial Química Saura, etc. they would provide the pigments and other materials. The City Council’s involvement would be limited to the overnight and food expenses of the artists coming from outside. The poor mayor, Manuel Rodríguez, did not quite believe it and it is logical that he was worried and the movie Someone flew over the cuckoo’s nest came to mind. The secretary of the City Council, Vicente Pérez, would act as commissioner of the project and the mayor’s henchman, Diego Miñano, would take the proper actions of protocol: passes to see El Misteri, mujolada with all i oli in the Hondo, etc.

The Viper Project would occupy the canalized section of the river from the Railway Bridge, where the head of the serpent would be located, to the Albarranch Painter’s Footbridge where the tail would be. Total: 1,221 meters long. The urban intervention would enter the Guinness Book of Records as the “World’s Largest Mural”. The City Council hired the company Paisajes Españones, postcard specialists, to photograph the entire painted section, resulting in four splendid aerial photographs that were published in different protocol forms. Citizens must also have enough photos and slides of the entire amazing process of realization.

This month of August 2021 marks the 30th anniversary of the passage of that comet through the city and for some time the guardians of its memory have talked about celebrating this round of thirty years with the completion of the Viper III Project and the special edition a catalog-memory that includes the history of the three Viper Projects carried out; extension consistent with the social function of the Museum of Contemporary Art of Elche (1980): to bring art closer to people.

The Covid-19 pandemic has put everything we had in mind on hold. Postponing performances for a couple of years. Meanwhile, we will continue conversations with ecologists to achieve a Viper III Project that is the most respectful of the environment, democratic art and artistic education. For now we have stayed with the idea of ​​cleaning the existing paintings of the previous Viper Project and painting on top of some giant figures like those of Nazca (Peru) simply with white from Spain or any lime paint; knowing that the permanence of these drawings will be very brief and will greatly exacerbate the ephemeral nature that previous Viper Projects always had. The important thing is that this stretch of the river is maintained as a symbol of an artistic place and an educational vocation. To be continue…