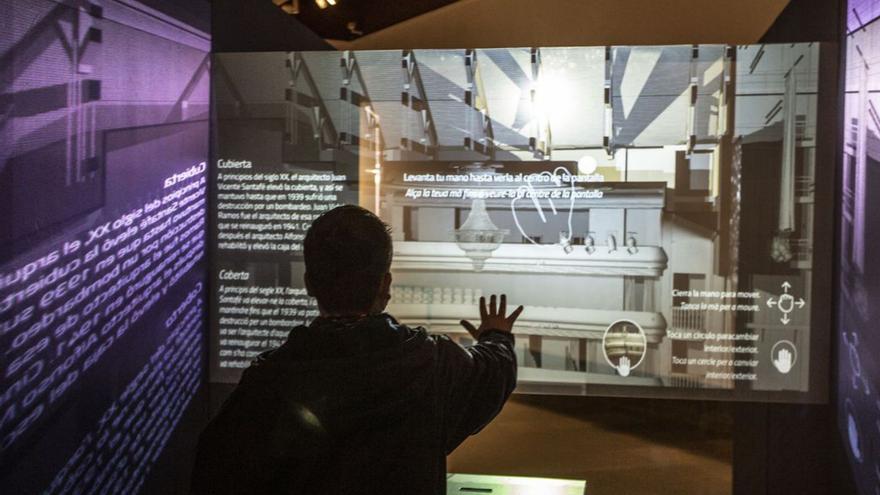 That in the mid-nineteenth century a score of bourgeois came together to build a theater in Alicante says a lot about the interest in culture at that time. This is how the Teatro Principal was born, a building that celebrates its 175th anniversary as the epicenter of the performing arts in the city. Going through that history, looking at the past but thinking about the future, is the objective of the exhibition that was inaugurated yesterday at the Lonja, by the Alicante City Council, in collaboration with Fundación Mediterráneo, and which can be seen until 18 April.

A visitor virtually walks through the interior of the theater through a screen. Image of one of the parts of the exhibition. | ALEX DOMINGUEZ

An exhibition based on historical documents and photographs but offered to the public translated into the language of the 21st century, with interactive elements and virtual reality. That is why you can tour the theater inside through a screen or select pages from the Diaries of theater performances or see a large-size map of the city, when it still had the wall.

“The exhibition has been built from today with a historical perspective,” says Juana María Balsalobre, curator of this exhibition that began to take shape two years ago. “The really exciting thing has been being able to reread, rediscover, dive into the archives and discover things, based on very extensive documentation”, which is found in the Municipal Archive and the legacy of the Portes family in Fundación Mediterráneo, in addition to private collections .

The selection, “which has been the most difficult”, includes 500 photographs and documents, both posters and handouts, advertisements, plans and articles. “We try to clearly convey the context and emotion,” says the historian. “We wanted the exhibition to be historical, open and plural, a study of yesterday brought to the 21st century”, something that Cota Cero has commissioned.

The sample has been structured in seven sections. The first is the presentation, which includes the list of more than 200 people who have contributed in one way or another to the exhibition. It continues with the theme of advertising in a square space whose walls are floating panels used for scenery. They reproduce more than 130 advertising images of the theater from the 19th century to the present.

The third part focuses on History, architecture and the city, with photographs and plans, such as the drawing of the theater made by the architect Emilio Jover and given to readers by the newspaper El Mensajero, or the one signed by Coello in 1853 with the walls still . A screen has been placed in this space to virtually tour the interior of the theatre.

A tablet has been placed below to view pages of the Diaries of performances from 1847 to 1962, which are preserved thanks to the Portes family.

The fifth space focuses on Publications and research, original documents that can be seen in a showcase, to continue with the section El Teatro Principal, a cultural pillar of Alicante, which offers the history of the performing arts in this coliseum by genre and with a screen that projects more than 80 photographs.

It closes with The expression of the theater community, a video in which actors and directors who have passed through the Principal speak, such as Aitana Sánchez Gijón, Carloso Sobera, Loles León or Juanjo Llorens. In addition, a book has been placed in which nearly 200 people have left their vision of Alicante theater written.

The mayor of Alicante, Luis Barcala, highlighted the “pioneering and enlightening vision” of the people of Alicante who came together to build the theater and pointed out: “May this anniversary serve not only to remember our history but to write our future.”

Giving the importance to the theater that it always had “but that deserves to be highlighted so that Alicante society feels proud”, is the objective, according to the Councilor for Culture, Antonio Manresa.

For his part, the president of Fundación Mediterráneo, Luis Boyer, highlighted “the great event” that its inauguration must have meant for the city.

The next step will be the presentation of the catalog and also a series of activities.

Rehabilitation first; remove the debt, after

The rehabilitation of the Principal, the bidding for the project, is the “absolute priority”, according to what Barcala stated yesterday. Later it will be seen how the cancellation of the debt of 900,000 euros is undertaken. “Either the deed of acquisition of the shares by the Generalitat is modified or we look for another solution, because Intervention is causing many problems, not without reason.” The mayor pointed out that the payment of the debt “is not enough, more money must be contributed.”

On this issue, the Municipal Compromís Group yesterday denounced “the blockade situation” in which the theater is located, so “Barcala should assume the failure of its management,” said its spokesman, Natxo Bellido. «For this reason, he should accept the offer from Conseller Marzà to take charge of the theatrical institution».