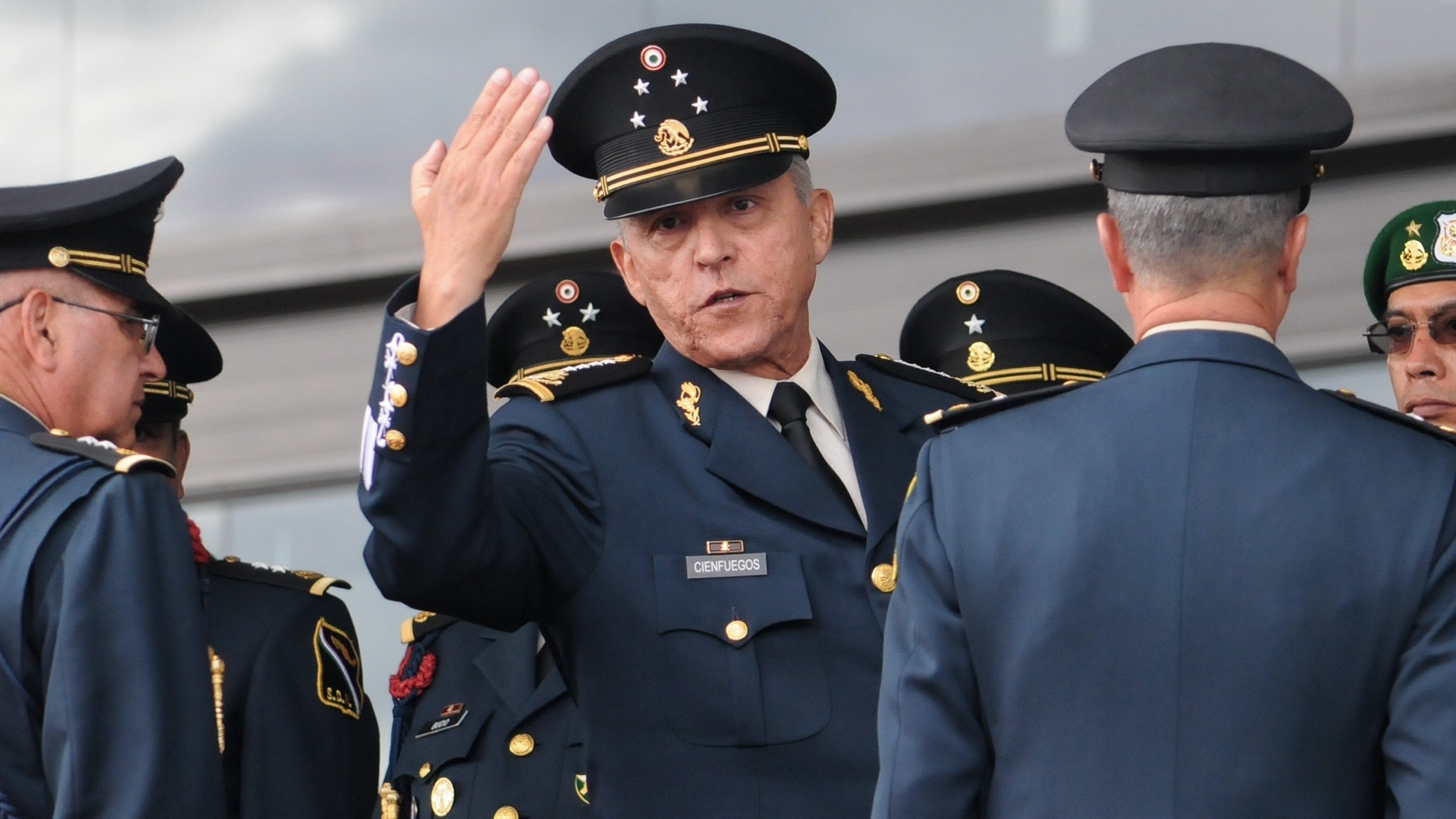 From the New York jail, General Salvador Cienfuegos heard on November 6 how Judge Carol B. Amon read him for the first time the charges against him: drug trafficking and money laundering. He pleaded not guilty and returned to the cell to await the next hearing. On Friday the 13th, the defense of the former head of the Mexican Army requested an extension of the deadline prior to the opening of the trial. A common request in this type of case, complex and with mountains of documentation, with which the parties usually seek to buy time to prepare their procedural strategies.

That request from his lawyer, Edward V. Sapone, a private lawyer but with ties to the Mexican consulate in New York, now yields new readings after learning that even before the first hearings with the judge, Mexico had already started in parallel an unprecedented diplomatic crusade to bring the general back. In fact, on the same day as the first hearing, the Mexican Prosecutor’s Office received in its offices the full investigation of the United States Federal Anti-Drug Agency (DEA). And before the second was held, he also had in his possession all the evidence collected by the US Attorney’s Office. Four days later, the joint agreement between the two prosecutors was announced: Cienfuegos returned to Mexico free of charges.

The result of an unusual negotiation in the relationship between the two countries, a Mexican victory for politics over US law. A battle forged during 33 frantic days in which the Mexican diplomatic machinery deployed all the artillery in their hands. From the outset, Mexico considered the null communication and unilateral activity of the US authorities a serious violation of bilateral security agreements. The DEA had been investigating Cienfuegos since 2013 and in August 2019 the New York Court had already issued an arrest warrant. However, the Mexican Foreign Ministry was only notified more than a year later, the same day of the arrest. After the hurricane, Foreign Service sources interpret what happened during this dizzying month as a demonstration that Mexico “is capable of setting the agenda, enforcing its sovereignty and generating trust in its institutions.”

Cienfuegos, 72, was arrested on the afternoon of Thursday, October 15, when he landed at the Los Angeles airport for what was to be a family trip. There the first call from the American ambassador takes place. Christopher Landau picks up the phone and informs the Mexican Foreign Minister of the existence of the Operation Godfather. According to his research, that’s what they called in the underworld who had been Mexico’s Secretary of Defense until just under three years ago. Cienfuegos was accused of working for organized crime; of trafficking thousands of kilos of heroin, cocaine, marijuana and methamphetamine; to protect and collaborate with a specific cartel (the Beltrán Leyva) and to launder the money from millionaire bribes.

The response of Marcelo Ebrard, the Secretary of Foreign Relations, was to request an urgent meeting with the ambassador. The appointment takes place on Wednesday October 21 at the headquarters of the Ministry of Foreign Affairs, where Ebrard expresses “his surprise and discontent” for not having been notified before. Meanwhile, Cienfuegos had already gone through the California Federal Court, which had denied him a bond of $ 750,000 to continue the process in freedom. The Prosecutor’s Office then stressed the seriousness of the charges and the risk that the general would use his influence in Mexico to escape.

On Friday 23, the detainee is transferred under the custody of federal agents to the Brooklyn court, the same forum that tried El Chapo Guzmán. Three days later, the Foreign Ministry contacted the United States Attorney General, William P. Barr. Again, they underline their discontent: “by virtue of the alliance that we have against organized crime, it is not understandable that the Mexican side had not been notified in time.”

The pressure continues to increase and just two days later, on Wednesday the 28th, the Foreign Ministry raises the tone through the use of formal channels and sends a diplomatic note to its counterparts showing its “profound estrangement.” During the offensive, Mexico even threatened to restrict the operation of the 50 DEA agents distributed south of the Rio Grande. Some pressures that López Obrador himself qualified on Thursday: “We did not threaten the agents with expulsion, we said that we want to be informed and that the cooperation agreements be respected.” But in the end it seems that they were effective.

Another two days after the sending of the diplomatic note, the office of the general director for North America, Roberto Velasco, receives a letter signed by the internal Administrator of the DEA, Timothy Shea, with an annex of more than 700 pages that contains the full investigation of the anti-drug agency against the Godfather for almost a decade. On Friday, November 6, Ebrard called Barr again to inform him that the Attorney General’s Office (FGR) already has the documents in its possession. That same Friday, Cienfuegos pleaded not guilty before the New York Court. The following week, the FGR formally requested that Washington also send the collected evidence, for example, the alleged thousands of messages crossed between the Cienfuegos Blackberry and the drug trafficker known as the H-2.

The petition is also accepted and on Wednesday, November 11, Mexico receives all the evidence by diplomatic bag. Two days later, on Thursday the 13th, the Cienfuegos lawyer will ask for more time to prepare his defense. On Tuesday, four days later, the agreement by which the US Attorney’s Office drops all charges against the general will be announced. The next day, the former Secretary of Defense is already in Mexico. After being informed upon his arrival that the FGR has opened an investigation against him, Cienfuegos is free.

Before making the bomb agreed between the two prosecutors public, the US Department of Justice had already begun the formal route for the withdrawal of charges. The document presented to the judge this Monday reads that the justification is the existence of “delicate and important foreign policy considerations that outweigh the government’s interest. [de Estados Unidos] to prosecute and prosecute the accused ”.

These words have given a lot to talk about in Mexico, especially for what they hide: Is it a courtesy of Trump with López Obrador? For Arturo Sarukhan, Mexican ambassador to the United States during the government of Felipe Calderón (2006-2012), the decision transcends the two presidents. “There seem to be two determining factors. The first, that the current Mexican government seems to have discovered that it does have teeth to exercise in the bilateral relationship and has threatened retaliatory measures in terms of anti-narcotics cooperation and particularly with regard to the presence and operating rules of the agents of the DEA ”, argues the diplomat. “And second, that it is highly probable that the DEA left in band without consulting the decision to arrest the general within the interagency process in the US Government.” Sarukhan clarifies that “paradoxically, the decision demonstrates something that is neither evident nor palpable in broad sectors of public opinion in both countries: the enormous strategic importance that Mexico plays for the US. And that was at risk today ”.

For Jorge Castañeda, Secretary of Foreign Relations during the government of Vicente Fox (2000-2006), it is important to underline that “the so-called establishment US foreign policy is characterized by not doing anything that could endanger the stability and equilibrium of the relationship with Mexico, even at the cost of setting aside a robust case like that of Cienfuegos ”. He is also a professor at New York University and author of the recent book on bilateral relations between the two countries, United States: in privacy and from a distance (Debate, 2020), also shares the idea that the origin of the case is the impetus “of two prosecutors who have a reputation for cowboys and that surely if they notified their superiors but they did not pass the inter-institutional processes of analysis and reflection to the foreign policy and intelligence bodies ”.

One of those cowboysAs Castañeda calls them, it is the acting prosecutor in Brooklyn, Seth DuCharme, who also admitted in Wednesday’s hearing that the reversal sought to protect “the relationship of the United States with Mexico.” DuCharme affirmed at the same time that his office continued to maintain certainty about the soundness of his investigation. And when asked by the judge, he admitted that the decision to drop the charges against Cienfuegos came from the “highest level of the Department of Justice.” Judge Amon herself also pointed out that “although these are very serious charges against a truly significant figure and the old saying of ‘bird in hand’ comes to mind, I have no reason to doubt the sincerity of the Government’s decision.”

Sarukhan adds that “the arrest and eventual trial put in potential check a military relationship between the two nations that we have been carefully building over the last two decades. It is highly likely that it was the Pentagon itself that raised the cry and pushed for the Justice Department to make a U-turn. “

Another hypothesis that hovers over the unusual negotiation is whether Mexico offered some kind of counterpart to the return of Cienfuegos. “If there has been, it could be a greater commitment to accelerate pending extraditions, new cooperative efforts or new arrests,” adds Castañeda. An interpretation in tune with the information published this Friday by Reuters, which indicates that Mexico made a commitment with the US Attorney’s Office to the imminent arrest of a high-level boss.