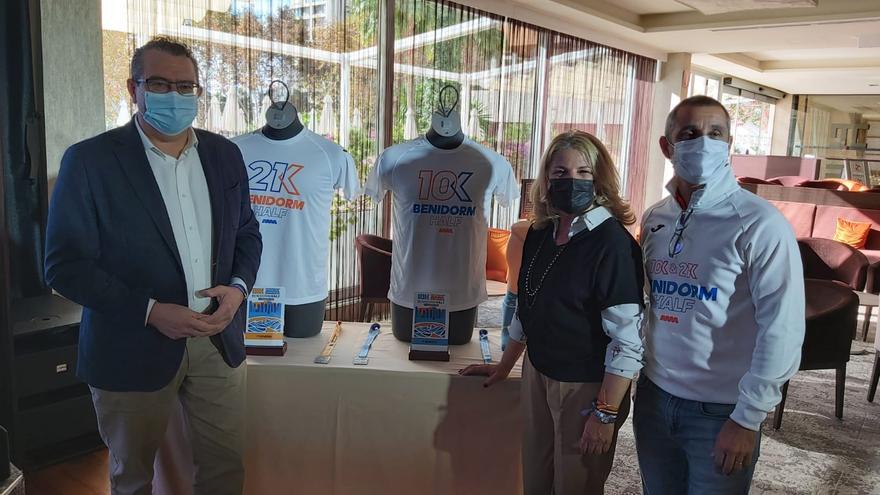 The 37th edition of la Benidorm Half It will start at 6.30 pm on Saturday 27 of this month and will do so with the participation of 3,500 runners from 16 different countries, as detailed this morning by the organizers during the presentation of the event, which took place at the Don Pancho hotel.

The Benidorm Half has a 10K and a 21K races and is included in the calendar of the Royal Spanish Athletics Federation (RFEA) with an approved route since last July. It will be played in a night frame that will allow to put the focus on a spectacular experience with a production of lights, colors and music throughout the race.

Fernando Brotons, CEO of TSB Sports Events, organizer of the event, has detailed that the race consists of four pillars: sports, international, tourist and experiential. In the sporting aspect, he highlighted that this year the route will pass through the new part of Avenida del Mediterráneo, the two beaches and the start and finish line in the Plaza del Ayuntamiento. Likewise, the previous slopes have been eliminated from the route “so a fast race has been set up for those who wish to make a good mark”.

The route It will be marked with kilometer points and will have a wide deployment of ambulances and a field hospital at the finish line, with doctors, mobile ICU, infirmary and Red Cross volunteers. There will also be a refreshment station every five kilometers.

Regarding participation, it is noteworthy that 33% of those registered are women, “a percentage that grows every year,” Brotons said.

In the international pillar, the organizer has underlined the “great presence” of British runners, with a total of 827 registered, representing around 25% of the total. To increase loyalty, the organization has arranged the ‘Feeling at home’ plan that will consist of the installation of a British entertainment point with music and flags of that nationality, a route marked in miles, bilingual speakers and communication on social networks and websites in both languages, Spanish and English.

At this point, the manager of Visit Benidorm, Leire Bilbao, has remarked “the importance of these actions for the promotion of the city, which is essential for the seasonal adjustment”.

In the field of tourism, Brotons has influenced the binomial sport and tourism and how the test “contributes to the positioning of Benidorm as a sports tourist destination”. At that point he has cited the presence of athletes from 13 of the 17 Spanish autonomous communities “which translates into overnight stays because many are accompanied by their families.”

Finally, Fernando brotons has put the accent on the experiential aspect with the creation of the ‘Running experience’, which will feature a spectacular start, animation at different points, a circuit by the sea, a commercial ‘village’, a VIP area, an elaborate production, a large audience throughout the route, a spectacular finish, and pre and post-race activities.

He was referring in this sense to the fourth edition of the Fourth Half Marathon of the Tapa, in which those registered will have special prices to taste drinks and tapas in the establishments around the Plaza de la Constitución.

Likewise, the Benidorm Half will be inclusive with four categories of adapted sport: wheelchair, functional, sensory and intellectual disability. In addition, the organization will increase its sustainable side with the reduction of paper consumption since neither numbers nor lists will be printed and everything can be done using QR codes.

As for the 2022 edition, Brotons has anticipated that it will be in March and that the registration at a reduced price has already been launched for those registered this year. On Sunday there will be a new reduced price window for those who wish to sign up now.

Toni Perez, Mayor of Benidorm, has closed the event and described the Benidorm Half as “a wonderful experience that was highly anticipated this year.” The first mayor has also outlined the “sporty, international, tourist and experiential” spirit of the race and recalled that the Benidorm Half was “the first use case under the UNE 166006 standard that was committed to technological surveillance and competitiveness in the intelligence”.

Pérez has meant that the values ​​of sport “are what unite us and champion us” and has emphasized that this event “allows many friends of sport and Benidorm to have a magnificent space here to carry out their experiences”. The mayor concluded by stating that this event “provides our destination with a greater capacity for attraction.”