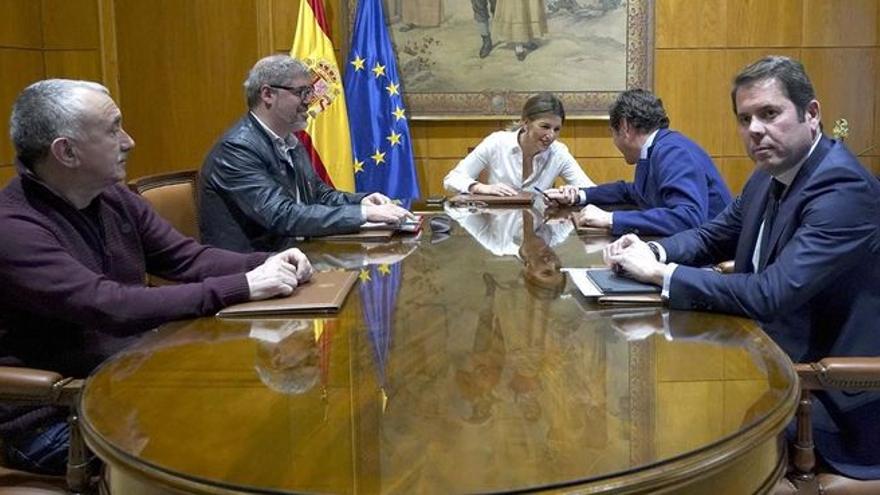 The positions are further apart on some issues than on others and it is easier to find consensus on some points than on others. Until now, social dialogue has lived a practically uninterrupted idyll since the beginning of 2020. The emergency of the pandemic has pushed the parties to agree and the fact that many of the issues were resolved with public resourcesLike the Ertes, it made entente easier. However, structural reforms are now coming into play, which will condition the working market beyond the pandemic. And this hinders the convergence of interests. These are the main subjects and hot spots that are up for debate in the social dialogue.

The first big deal was the last rise in the minimum salary, when the Minister of Labor (now also Second Vice President), Yolanda Diaz, agreed with employers and unions to reach the current 950 euros gross (14 paid). That success could not be reproduced a year later, when in January 2021 he failed to agree on a new rise for this year. Then the most conservative wing of the Government closed ranks with the bosses and the SMI froze.

Now in September, in the heat of the good data from job and with the inflation above 3%, negotiations have been reopened and Labor has put on the table a proposal to raise between 12 and 19 euros. The employer has rejected it and does not want any increase this year. To get closer to the unions, the last proposal submitted is to raise the SMI a few 15 euros for the last four months of the year.

However, the unions have not closed anything with the Executive, because their will is to leave a rise tied also for the January 1, 2022. Here his proposal is to reach the 1.000 euros and they would be willing to accept lower increases this year if that four-figure amount is closed next year. The problem is that Trabajo cannot close this issue with them, because it cannot agree on that amount with its government partners.

The employer’s association, for its part, has been open to negotiating increases in 2022, but has not slipped what figure it would see as reasonable. The Government will have to decide whether to agree to a double figure with the unions, at the cost of angering the employers, or to legislate unilaterally, because the unions will not accept an increase below the CPI if they do not ensure their goal of 1,000 euros for the year that comes. The third option is for the unions to support the rise, in an act of faith and under the vague commitment of a higher rise in 2022. Before the end of September, the Government must decide.

The pandemic interrupted the negotiating tables in which Labor, employers and unions debated dismantling part of the PP labor reform. The main points of the reform were the Outsourcing, the ultraactive, the primacy of covenants sectorial over company and the reform of the temporality. However, the health emergency left negotiations fallow, which were just starting and on which there were shared documents, but no agreements.

This Monday, social dialogue has resumed negotiations after the August break. The main point has been the reform of temporality, through which Díaz intends to limit the objective causes that justify signing a temporary contract, in addition to limiting and making the dismissal. The Labor proposal aims to reduce the types of contract to three (undefined, temporal and of training). And the content does not like the employers and still does not convince the centrals.

Díaz’s labor reform also intends that the workers of a subcontractor do not have worse salary conditions than those of the main company, in addition to recovering the ultra-activity of the agreements. Here the debate is whether this ultra-activity will be indefinite or the years of validity will be increased. Agreement derogations and unilateral modification working conditions are also on the table.

The calendar to finish finalizing the labor reform is tight, as the Government promised, within the framework of European funds, to the European Comission have it approved before December 31st. The times that the parties manage is that there are a month and a half of negotiations left, because by the beginning of November Labor would like to have this question closed in order to be able to carry out the perceptual procedures to take it to the Council of Ministers. The possibility of it being articulated as a bill may delay its entry into force and modify the content of the agreement in social dialogue.

Also Read  "Viral Tsunami": US on Route to 20 Million Infections; new record with 3,700 deaths in one day and few vaccinated

At the end of June, the Government managed to close an agreement with the social agents to bury part of the PP reform on pensions. At the moment the calendar is advancing, broadly speaking, as planned by the Minister of Social Security, Jose Luis Escrivá. The main points of this reform are the automatic revaluation of pensions according to the IPC and the introduction of incentives and disincentives to curb the early retirement and that people work more years.

The first issues that were addressed in the meeting this past Monday were the specification of the regulations so that the fellows contribute, how to match the pensions of common-law couples those of marriages and the new contribution system for autonomous. This last element is the most controversial. The Government proposes a system of tranches, to pay installments of between 90 and 1,220 euros a month; according to the turnover of the workers. And it proposes an adaptation period of several years. The parties are now debating these two pillars.

Now the negotiations are in a second phase, in which it will be necessary to determine how to adapt the high demographic weight of the ‘baby boomers‘to the scarcity of later generations. The parties must define the “intergenerational equity mechanism”, The instrument that Escrivá will have to finish defining and agreeing with the social agents to ensure that the higher spending on pensions can be paid for without a risk to the public system. And this can be done by spending less or earning more (or a mix of both). The more restrictive the mechanism, the more difficult it will be to reach an agreement with the social agents; especially with the unions.

Also Read  'I have this little extra strength': the rare and intense world of a super smell | Society

The one that begins to negotiate this Thursday will be the sixth extension of the ertes covid. So far all extensions have been settled with tripartite consensus and the government has kept the front intact in social dialogue. There have been shocks and hasty extensions until the last minute before the Minister council that had to validate the agreement, but this has always been reached. The public commitment, reiterated by different ministers, is that as long as there is a health emergency, there will continue to be ertes.

There are currently some 260,000 workers that continue in erte and that depend on the renewal of these aid, with sectors such as hospitality, the restoration, the travel agency and the nightlife as the main sectors affected. Negotiations begin this Thursday and the specific conditions of the extension will have to be settled. The first vice president, Nadia Calvin, he slipped that ‘renew’ did not mean to extend under the same conditions as the previous ones. Until now, Social Security awarded more to those companies that managed to remove workers from the file and maintained ultra-protected sectors.

The Government will raise its conditions and negotiations will begin. If the script from previous extensions is repeated, the first thing to agree on is the date. Considering that the Christmas campaign and that the renewals have always been every three or four months, it is probable that the periods will last until January 31. Then the parties will have to debate whether the current model is replicated, aid to companies is lowered or a sector is excluded. The more downward, the more opposition the employer will raise. And, in the medium term, the Government will have to define a permanent model of new ages, with the aim that it begins to take effect as of next year.