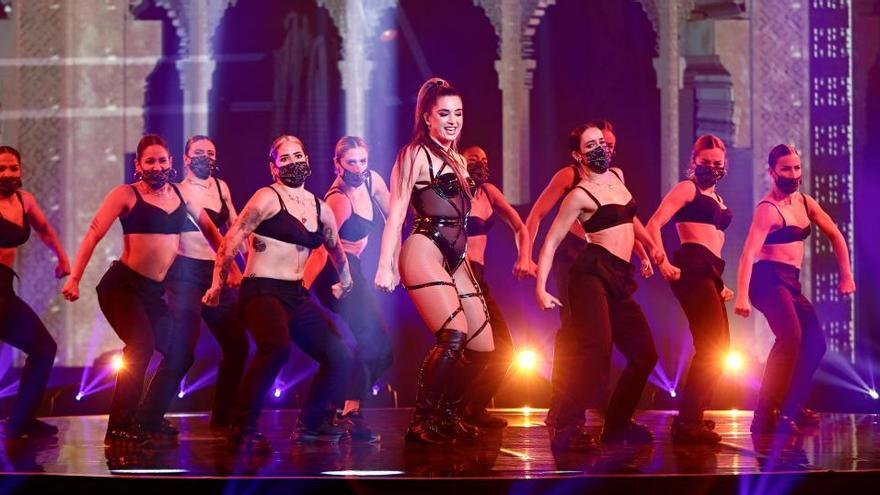 Los40 Music Awards, los “Most Important Music Awards” in Spain and Latin America or, at least, those of the most listened to station, have given a leap to internationality with its most different and special gala due to the Coronavirus pandemic. A powerful gala in rhythm that has awarded David Bisbal, Maluma and Dua Lipa and honored the singer Pau Donés.

The Almerian received the Album of the year awards for ‘En tus planes’ and for the Song of the year with ‘Si tú la quiero’, performed with Aitana. “Thank you very much with all my heart, I am very happy for this award, which is also for you Aitana, we love you very much,” he acknowledged. Also, the singer wanted to share his award with all those people who “have had it and are having a bad time this year”: “I send you a big hug,” he added.

The ceremony, dedicated to giving visibility to the enormous impact that the pandemic has had on the sector of live music and, especially, in the thousands of professionals who support it, it has been possible to follow it live on Divinity, Los40, los40.com, with the mobile application, YouTube, Facebook and Twitter, where it would soon become ‘ trending topic ‘of the night. In Latin America, they have also been able to follow the gala on the HTV channel.

Definitely, the most emotional moment of the night was the tribute to Pau Donés with the delivery of a Golden Music Award posthumously for his career and a performance by his friend Carlos Tarque. “Pau your songs were lightI wish this Golden was a time machine and gave us back the good times, “he said before starting the performance.

Dani Martín also received a Golden Music Award in recognition of his influence as a major artist in the music scene. This award was full of emotion since Joaquín Sabina wanted to participate in this recognition by dedicating a video message that was projected during this moment of the gala and that brought more than one smile to the Madrid singer.

“Together we have lived, we have changed, we have drunk, we have laughed, we have let dreams run free through our veins. And, despite all the years of putting up with each other, now that you are going to receive a more than deserved award I have to throw that phrase at you: ‘And however, I love you‘, but let no one find out, “Sabina pointed out. An emotional Martín thanked the” teacher’s “words” so beautiful “and dedicated the award to “all the people who work behind from the stages and make concerts and records possible “:” People of culture, we will move forward, “he added.

In the international category, the icing on the cake was put by the British singer Dua Lipa, who won the Artist of the Year award and repeated the award with the Album of the Year for his ‘Future Nostalgia’. “Thank you for the awards, I will never forget the first time I won a 40 (€) award. Winning for the best album means so much to me. I was going to start my tour in Madrid, but due to the pandemic we couldn’t, so I hope to see you very soon “, he thanked through a video, before giving way to his two performances.

Cristina Boscá, Dani Moreno ‘El Gallo’, Óscar Martínez and DJ Nano have accompanied Tony Aguilar, master of ceremonies, on the stage where they have been parading with their performances Ana Mena in duet with Fred de Palma, Camilo, Pablo López, Dani Martín, Nil Moliner with Dani Fernández, C. Tangana or Maluma with a ‘potpourri’ of their greatest hits.

The ‘Star’ and most anticipated performance of the night has been signed by Lola Indigo With his hits ‘4 besos’, ‘Trendy’ and ‘Santeria’, who has revolutionized social networks, although tonight has gone empty when Pablo Alborán and Ava Max snatched the award for the Video Clip of the year for ‘Tabú’.

Maluma and Camilo came to the gala from Colombia to thank the awards that the 15th edition of the 40 Music Awards had given them. “I did not expect so many awards at all, I am proud and honored to have them in my hands. I hope that soon we will see each other on the stage again, “said the winner of Latin Artist of the Year and Song of the Year for ‘Hawaii.’ Morat have won the Grupo del 40 al 1 award, who have thanked through a video and Karol G has also been absent, who has received the Video Clip of the Year award for his song with Nicki Minaj ‘Tusa’.

Another of the moments that have made the audience’s hair stand on end and has revolutionized the networks has been the interpretation of the song ‘Volverán those moments’ by ELE (Elena Iturrieta). A single created for the Bankiter announcement and that refers to the bad times that the Coronavirus is giving the world. “I remember when in the middle of the pandemic a television commercial with this song came out and it made me want to cry. Creeps with acting“Said a viewer via Twitter.

Before starting the ‘show’, in addition to the artists, the protagonists of the ‘Veneno’ series Daniela Santiago and Lola Rodríguez, Dani Martínez, Santi Millán, Dulceida, Carlos Jean, Edurne, Fred de Palma, have paraded on the carpet, Lara Álvarez and Vanesa Romero, among others, in charge of giving the awards to the winners.