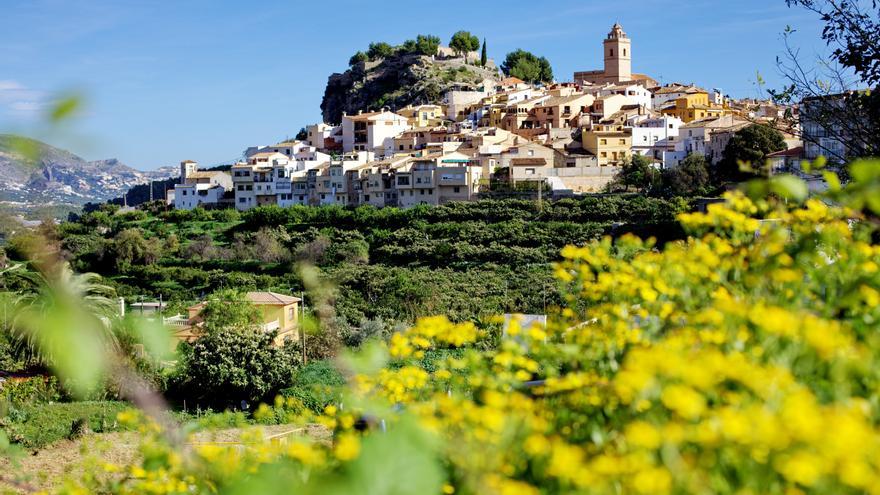 Sea and mountain is the formula of the Alicante province, a tourist area for all tastes. Disconnecting from work, routine or study is one of the main objectives for the holidays. For it, no need to travel to another country or city in Spain, since in Alicante there are municipalities that offer from the trekking in the middle of the mountain to the diving in the waters of Costa Blanca.

Nature and history emerge from this municipality of 4,850 inhabitants. Polop de la Marina is located in the central area of ​​the Marina Baixa, surrounded by the Ponoch massif together with the Salt and Canet de Xirles ravines that give this town some spectacular views.

Narrow alleys that hide numerous monuments such as the Plaza de los Chorros where the Fountain of the Chorros, declared Intangible Heritage of Humanity by UNESCO, o la Gabriel Miró House Museum, a writer from Alicante who spent several seasons in this municipality.

One of its greatest attractions is its 12th century castle, from the Almohad period, declared a Site of Cultural Interest in 1997. This emblematic place stands on a hill 270 meters above sea level, next to the bell tower of the Church of San Pedro and the Ponoch. Inside, rests the old town cemetery known as ‘the literary cemetery of Gabriel Miró’ from where you can see a landscape to remember.

Tranquility, architectural and hydraulic heritage, flora or mountain views are some of the attractions of Sella, a town in the interior of the province of Alicante. It is located in the Marina Baixa region, between the Sella and Amadorio rivers.

Due to its location, it is surrounded by great attractions such as the hiking through the Sierra de Aitana, the Puig Campana or ‘The Water Route’ that originates from the same municipality. Along this last route, are the natural pools: ‘La Font Major’ and the ‘Poza de la Alcántera’, a place that exudes peace and where you can refresh yourself.

A town on the Costa Blanca, north of the province of Alicante, characterized by its Mediterranean stamp. The Rock of Ifach, the Salinas, its white and transparent coves O medieval and roman ruins are some of the incentives to visit Calp.

For lovers of the sea, this municipality contains numerous water activities such as diving, paddle surfing, kayaking routes or a ride on a jet ski, among others. In addition, we must not forget the great Rock of Ifach, the 332-meter mountain that crowns the municipality and has a route of a total of 5 kilometers.

Altea is one of the most visited and recognized towns in Spain. Therefore, as an alternative there is Mascarat a sector known as the border between the two coastal municipalities of Altea and Calp. An area that stands out for calm coastline and a canyon sculpted by the force of the water. The Barranc Salat, better known as the ‘Mascarat Canyon’ is a cleft that reaches 100 meters in height and that separates the Sierra de Bernia from Cape Morro de Toix.

After a recent conditioning, You can visit and enter this ravine, a short route (2 kilometers round trip), but worthy of appreciation with some bridges built at the top of the gorge.

A medieval village With only 209 inhabitants and a scandal view, it is one of the most visited municipalities in Spain: Guadalest Castle, declared a Historic-Artistic Site since 1974.

Guadalest is known for its rich historical and cultural heritage, its narrow streets and its white color stamp, each year receive up to 20,000 tourists who wish to visit the benchmark of interior tourism in the Valencian Community.

Among the most outstanding monuments, is the Castle of San jOse (known as Guadalest Castle) and the Bell tower up on the hill. In addition, you can visit up to eight museums that house a great diversity of themes such as dollhouses, micro-miniatures, old vehicles or the Casa Orduña, the noble residence of an 18th century family that preserves the decoration and furniture of the time.

The hiking trails or climbing activities also have a place in this municipality and is that, under Guadalest there is a reservoir that reaches 236 meters in length.