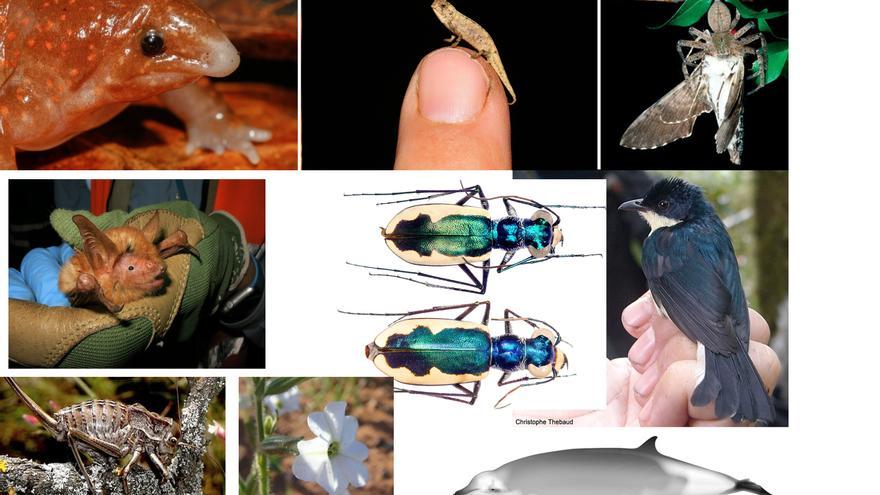 Scientists discover or describe thousands of new species each year, including animals, plants, and all kinds of microorganisms, both on land and in the sea. However, only some of them include peculiarities curious enough to jump into the media. These are some of the most relevant found during the year 2021.

The planet has since this year 24 different species of beaked whales, after it was discovered that the beaked whale found in the southern hemisphere belongs to a different species from the one found in the North Atlantic. A dead specimen was found by the iwi tribe of New Zealand and after being examined by the prestigious Maori expert on whales Ramari Stewart it was concluded that it was a new species of cetacean to add to the list of those already known until now. The scientific and common names are a tribute to the indigenous communities of both South Africa and New Zealand. The word ‘eu’ means ‘big fish’ in Maori.

This beautiful beetle (in the illustration, male and female) have been found so far only in two specific places in Mexico, specifically in the state of Coahuila. Its bright colors are its main characteristic and experts suppose that it could also be found in South Texas, in the USA. This beetle has been classified as a new species thanks to the 18 specimens collected between 1992 and 1994, which have been preserved since then in various museums and collections.

It is a kind of cricket that has been described as a species this year, although the first specimens were discovered in 2016 in the region of l’Anoia (Catalonia). Davier’s name is a contraction of David and Xavier, the two rural agents who were murdered in a Lleida hunting ground in 2017 by a hunter. Also the scientific name includes their surnames. Magazine Zootaxa included the description of the new species in an article published in April.

A new species of spider was discovered last year named after Swedish ecologist Greta Thunberg, but now 26 in total have been discovered, preserving the activist’s name as a genus. The spider in the picture is a Thunberga wasserthali. The 25 species described this year come from Madagascar. One of their characteristics is the numerous scars that they present in their body, caused according to it is believed by the males during the mating.

This large, brightly colored (orange and black) bat surprised researchers studying cave populations in Guinea in 2018. This animal did not match any of the previously known species. After the corresponding studies, it was found that it was a new species. Experts believe that it is possible that, despite being known for such a short time, it is already in danger of extinction. In fact, it could only live in the mountains where it was discovered.

Also Read  SEPE appointment by phone | How to contact the SEPE?

Only 13.5 millimeters long, it has the peculiarity that its genitalia occupy a fifth of its body, which allows it to mate with females older than it. The researchers discovered it in the rainy mountains of northern Madagascar, which have been protected to preserve the new species. However, it is believed that there are few specimens, so it has been requested that it be considered a critically endangered species. Although the specimens were discovered in 2012, the research results confirming the new species have been published in 2021 in the journal Scientific Reports.

This showy bird, belonging to the picabaya family, had gone unnoticed by ornithologists until it was found and classified as a new species. It lives in the forests of Kepala Burung, in New Guinea, and it seems to be an endemism that only lives in this part of the world. Also related to weevils, they represent a curious case of evolutionary adaptation, since the beaks of each species have been transformed for the consumption of the food on which they depend in each case.

If the tobacco plant already has negative health effects when consumed in the usual way by people, this new species has an added danger for insects, as it is covered with sticky glands that trap and kill small specimens. Although it is not yet classified as a carnivorous plant, the truth is that its scientific name testifies to its power. But we will have to wait and see if, in addition to killing insects, it also eats them. It lives in the arid areas of Australia.

Also Read  Is it safe for children? Is it a sedative?

This underground frog is one of three new species in the genus Synapturanus. The male’s song can only be heard during or after heavy rains. To find the animals, scientists must dig them up with their hands, which is why it has been called the zombie frog. All three species of frogs are found in a region of South America with incredible biodiversity, known as the Guiana Shield. Scientists believe that there may be six times as many Synapturanus species than have been described so far.