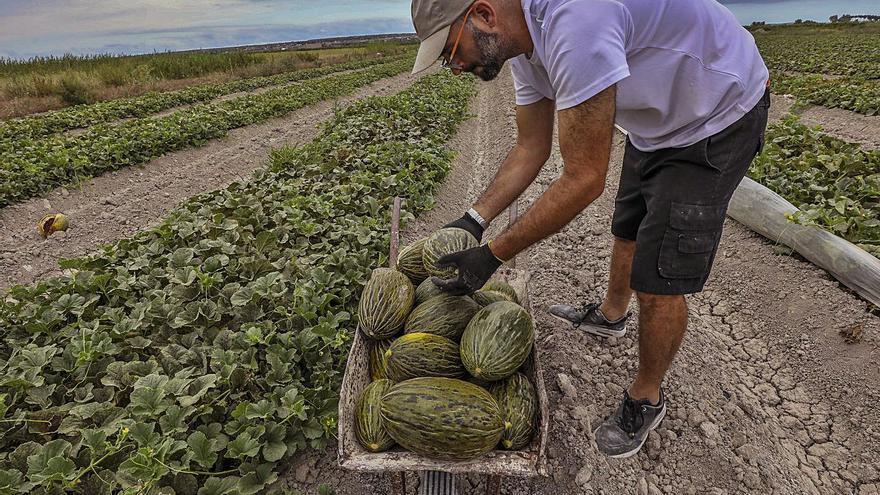 “We have chosen to stagger production to have a fixed amount of melon that we can get out week by week. In total, this summer we will have one month less production, “he explains in statements to this newspaper. the president of the Irrigation Community by Carrizales, Fernando Antón. A rainier spring than usual delayed the entry of farmers with tractors to prepare the ground for planting the tasty fruit of the Camp of Elche. This is the main reason why the production of melons will be stopped again, which, after a few years of unstoppable rise, has had to face important problems in recent times, such as the Dana or the coronavirus pandemic. This, for example, resulted in 50,000 kilos less of melon last year compared to 2019.

Production this summer will drop 25% as a result of the spring rains. | ANTONIO AMORÓS

“If you think, for example, to remove 10,000 kilos a week, the best thing is to do the cultivation in a staggered way to guarantee the sale”, Anton holds. The president of the Carrizales irrigators shows his satisfaction with the fact that the decrease does not affect the number of producers, which is still the same number. “Above all, it is related to the large producers, those who planted about 60 tahules last year and this summer have had to go down to 40 or 50. The smallest ones, those who plant 10 tahules, are maintained”, adds Anton in his explanations before the start of the campaign.

Sudden changes in temperature also play a trick on the production of melons, with situations such as those that have been experienced in the last weeks, in which days that have arrived up to 40 degrees Others have happened to them in which the thermometers have barely exceeded 25 degrees. “Changes in temperature cause the most mature melons to crack due to factors such as thermal imbalance, changes in humidity or lack of water. This means that it can already be harvested ”, says the representative of the farmers, who adds that this is in a process similar to that experienced with another of the star products of the Camp d’Elx, the mollar pomegranate.

As for the official court, an act that usually occurs around this time, last year, without going any further, took place on July 13, with the presence of representatives of the City Council and the Consell, it will be time to wait a bit. There are two problems that are delaying it, the plague of ticks that the Camp d’Elx suffers and the lack of a facility that can host the event. “We will surely change the format because we lack an infrastructure with sufficient parking spaces. It is likely that we will do the event in a restaurant in the country, such as Martino, which has always welcomed us with open arms, or in the urban nucleus “, Antón points out.

One more year, most of the Carrizales melon production will remain without leaving the province, since 90% will be sold between Elche, Alicante and the coastal areas (El Campello, Altea, Santa Pola, Torrevieja …) and inland (Alcoy, Xixona …). “Outside only very specific clients ask us because we cannot work with large distributors that do business in other countries due to the lack of water,” laments the president of the Carrizales irrigators.

Finally, in terms of quality, in the Camp of Elche continue to work on the basis of the studies that have been carried out in recent years by both the experts of the Miguel Hernández University of Elche as well as the Valencian Institute of Agricultural Research. All these aspects influence a campaign that will last until October.