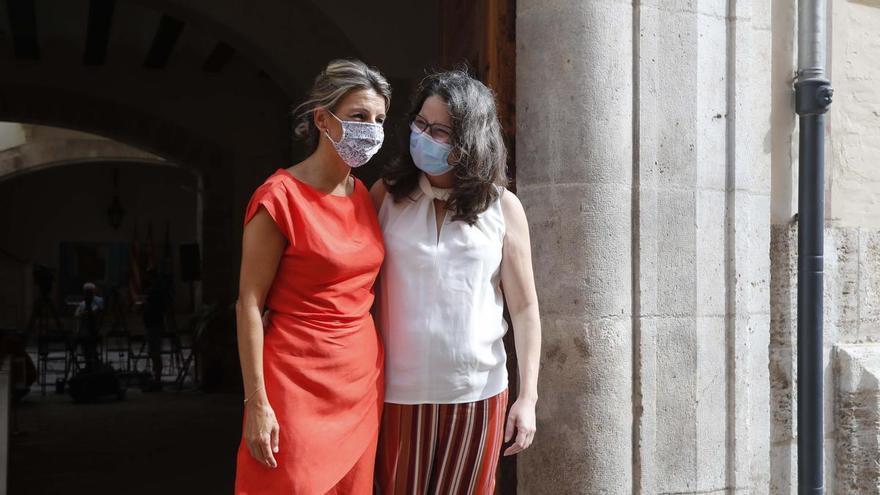 The act that the vice president of the Consell and leader of Compromís, Mónica Oltra, is preparing with the vice president of the Government, Yolanda Díaz, and other women leaders of left-wing parties such as the mayor of Barcelona, ​​Ada Colau (Barcelona en Comú), or the , spokesperson for Más Madrid in the Madrid Assembly, Mónica García, has accentuated the misgivings that already existed in Més Compromís (the old Bloc), the majority partner of the Valencian coalition.

The official version is that the meeting is part of the preparations that Iniciativa del País Valencià (the other leg together with Els Verds de Compromís) is organizing for its congress on January 15, but the guest roster reinforces that idea of ​​the electoral confluence of the left that Yolanda Díaz is betting on and that is on the way to becoming a minefield.

In fact, this meeting scheduled for the end of the year and that Initiative defends as a meeting of women with management experience has generated an earthquake with seismic waves in Més Compromís, which also extends to the other affected actors, such as Unidas Podemos or the More Country by Íñigo Errejón. For now, the act has caused surprise since it is being prepared outside the coalition. Weighty voices from the old Bloc consider that Oltra’s movement is an error that delves into the already existing frictions.

Since Yolanda Díaz commented to shake her idea of ​​an electoral project that would bring together the parties that are to the left of the PSOE but surpassing the initials, Més Compromís has already made his red line clear: no alliance supervised from Madrid that overlaps what they consider a successful brand. Not renouncing the acronym is an inalienable requirement, but this space that goes beyond the parties is precisely what makes Yolanda Díaz’s project different.

Mónica Oltra has so far avoided taking an open position in favor of this alliance and limits herself to showing her sympathy with Díaz. This is what he did when the two met in Valencia a month ago. Recently, in an interview on TVE, Oltra took another step by admitting that an electoral project without acronyms would be good. In this context, the act in Valencia with Yolanda Díaz, Ada Colau and Mónica García is a first-rate showcase to promote this project of women on the left with weight and their own image regardless of the acronyms.

Sources from Més Compromís recalled yesterday that the debate on possible electoral alliances for general elections is not on the table. “The parties that make up Compromís will talk about it when the time comes and it will be a debate more of ideas than of people with the red lines that Més has always had: that politics be made from the País Valencià”, they point out.

In Compromís there is no shortage of voices that interpret this Oltra movement in terms of personal notoriety. Oltra’s political career has suffered bumps and is now in the opposition’s crosshairs for the sentence of the sexual abuse of a minor by her ex-husband in a center supervised by the Generalitat. In addition, he has starred in several encounters with the PSPV at the Botànic. Being part of a project that transcends the Community allows promoting your political figure outside the Valencian territory, but (and that is the fear in Més Compromís) does not strengthen the project of the coalition or the Botànic.