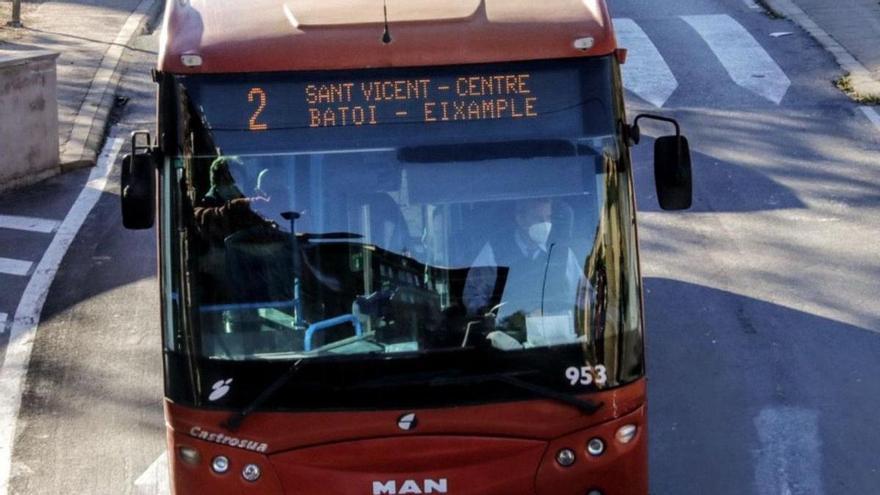 The draft is part of the participatory process that the government team has been carrying out for some months with the other political groups and neighborhood representatives to redefine the urban transport network for the new contract. The current proposal slightly improves the current frequency of passage, but it is still low, with the maximum exponent of a bus every half hour on line 4, which would link the historic center with the Ensanche and the North Zone. This is from Monday to Friday, because on weekend lines 45 and 54, complementary to each other, the frequency would be 50 minutes.

The municipal group of Compromís has expressed its discomfort at the low cadence that is proposed for the new bus network, as well as the scarce service that, in the opinion of the councilors, would be given to the upper area of ​​the Ensanche. The spokesperson for this formation, Màrius Ivorra, points out that “for the bus to be efficient we have to improve frequencies”, and argues that urban transport “works when it passes every ten minutes maximum.” The councilor admits that this requires “an investment in vehicles”, but that it would involve “an important improvement” to avoid travel by car. It also considers that, compared to long-haul lines, transfers should be favored.

Likewise, in relation to the service in the upper Ensanche area, the project also improves the current service, since line 1 would go to La Salle school and line 2 would go to Andreu Sempere institute. The latter is the only one that accesses this neighborhood, through Escultor Peresejo street, but only in one direction; to go from here to Santa Rosa you have to travel the entire line, through the historic center and the Zona Alta. The mayor Elisa Guillem considers this proposal insufficient, and recalls that the upper part of the Ensanche has a significant population, in addition to several educational centers. In this sense, Ivorra adds that a route in the opposite direction to the current one could be added through the Horta Major, which does not have a bus service at the moment.

The Councilor for Mobility, Jordi Martínez, is willing to consider Compromís’s observations, and points out that the development of the new bus service is an open process and that there are still several meetings with political groups and neighbors. However, he argues that the current proposal is a “more than remarkable” change compared to the service that is still in force, and that the arrival of the bus at the Andreu Sempere institute is precisely a vindication of the neighborhood. Also, remember that “we start from a budget and some lines” and “the resources are what they are”, so to implement the ideas proposed by Compromís it would be necessary to see if it is economically viable.

The municipal group of Compromís in Alcoy has also shown its dissatisfaction with the current regional transport, both towards Cocentaina and Muro and towards Ibi, Onil and Castalla. In this sense, Màrius Ivorra points out that “if we want Alcoy to be a regional capital it is necessary that there be a good service” and the buses improve their frequency and reach points such as the Virgen de los Lirios Hospital. Compromís plans to propose an institutional declaration to request improvements from the Generalitat, on whom these concessions depend.