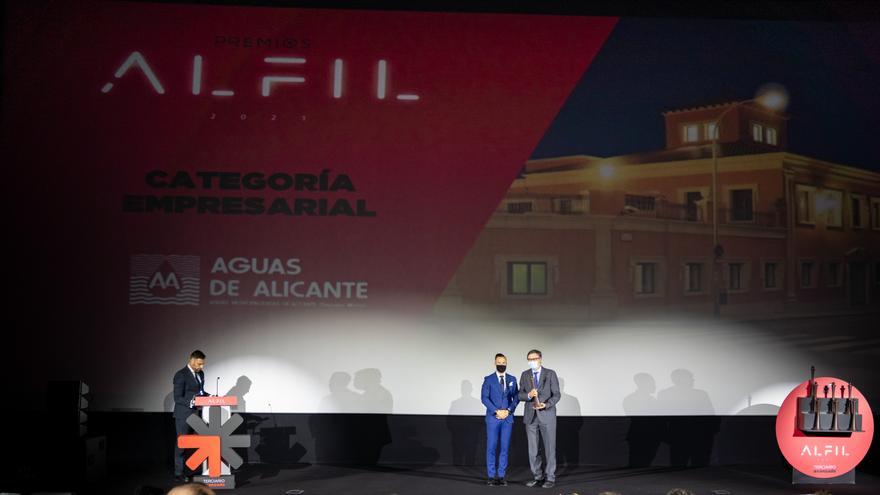 Alicante waters received yesterday the award for “Corporate Professional Career”, within the framework of IX edition of the 2021 Alfil Awards granted by the Advanced Tertiary Association. This award is a recognition of the company’s commitment to the digitization of processes and digital water management, explain from the institution.

Present in the municipalities of Alicante, Sant Vicent del Raspeig, Sant Joan d’Alacant, El Campello, Monforte del Cid and Petrer, Aguas commemorates throughout this year a trajectory that began 25 years ago, moment in which the company was already pioneer in the use of the first hydraulic modeling software in Spain fully integrated into its geographic information system, they add in a statement.

“Since then, its constant work in innovation has allowed the company to digitize areas such as customer service, where digital tools are used as useful elements for the user, so that the care they receive is increasingly adapted to their habits; even areas that the user does not see, but that are crucial for optimal water resource management and service excellence. Among others, the telelectura, one of the key levers to offer solutions to issues such as the limitation of energy and water resources, and that supposes a undeniable drive towards smart cities, providing great benefits “, both to the user and the operating company itself, as well as to the environment.” In a complementary way and thanks to all this wave of digitization implemented by Aguas de Alicante in all its areas of activity, we can fulfill other of our commitments essential, such as the environment ”, has declared Javier Díez, general director of the company.

Awarded by the Advanced Tertiary Association, the Alfil Awards have been consolidated over the last few years as a annual public recognition which shows how Alicante tertiary is at the forefront of progress, with high value-added services in the business processes of companies, institutions and society in general.

The award for “Corporate Professional Career” joins others received by Aguas de Alicante in recent months and years. Among others, in the field of innovation, the premio “Business Knowledge” recently received at the XXVII Edition of the New Business Ideas Awards of the Alicante University Business Foundation (Fundeun); the recognition of the Alicante Chamber in the I edition of the Alicante Centennial Companies Awards; in a more social environment, Sello Bequal PLUS awarded by the Bequal Foundation to socially responsible companies with disabilities and the achievement of a more responsible world; or, in an environmental aspect, the multiple awards received by the La Marjal park thanks to its contribution to the sustainability and resilience of the city of Alicante.