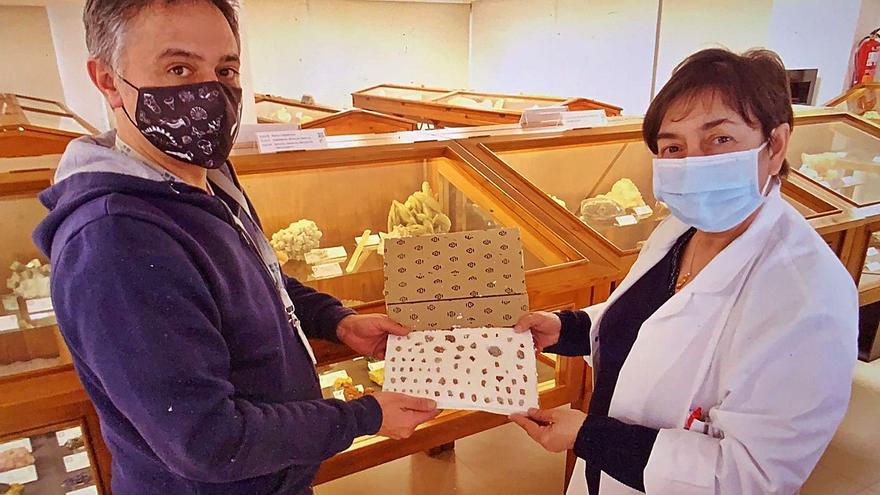 His latest achievement has been to value the geological quality of the Sierra Crevillentina, linking its activity to the work carried out by one of the most renowned scientists of the early twentieth century.

The aragonite It is one of the minerals that Jiménez de Cisneros identified in a pioneering way. From today, some samples of the mineral, sent by these crevillentine archaeologists, are exhibited in three of the most prestigious museums in Spain in the field of natural sciences and mineralogy: the Museum of Natural History of the University of Valencia, the Geominero Museum of the Geological and Mining Institute of Spain -IGME- and the National Museum of Natural Sciences of Madrid.

The crevillentino archaeologist who has sent the mineral |

«Aragonite is a mineral that, although present in many localities worldwide, in the Iberian Peninsula it is especially abundant and characteristic due to its crystallization in pseudohexagonal twins, associated with materials from the Triassic ”, explains Belmonte. In the Iberian Peninsula, it is especially the areas of the center and this peninsula that concentrate some of the best deposits, as indicated by Ramón Jiménez, curator of the mineral collection of the Geominero Museum of the IGME, where the Crevillent aragonite is already on display. in the section dedicated to Valencian lands. In Alicante, as reflected in the works of the aforementioned author, so far his presence has only been published in Petrer, Novelda and Crevillent. The Crevillentino deposit was made known by Jiménez de Cisneros around 1914. The second reference was made in 1919 and, towards that same year, Pedro Castro, who later would occupy the position of Professor of Mineralogy at the University of Seville, picked up the reference to Cisneros, indicating in a brief note that “due to lack of time” It was limited to consigning that new location, without collecting or providing further information. Satorre says that “after the work of Jiménez de Cisneros, the site fell practically into oblivion and nothing was known about its location.” However, more than two decades ago, Belmonte, a knowledgeable archaeologist of the Crevillent mountain range, again located the point where the aragonite mentioned by Jiménez de Cisneros emerges. A point that, at least for the moment, they prefer not to publicize to avoid looting and property damage. “This last aspect is, unfortunately, one of the dangers to which the extraordinary geological, paleontological and archaeological heritage that the Crevillent mountain range treasures can be subjected,” says Belmonte. For this reason, archaeologists stress “the need to carry out an adequate dissemination and educational work, showing the enormous wealth of this mountain range, at the same time teaching to respect and care for it and preserve it.”

As one of the leading specialists in Valencian mineralogy points out, Juan Miguel Casanova, in recognition of the extraordinary work carried out by the naturalist in these regions: “The works of Jiménez de Cisneros are the basis for learning about the mineralogy of Alicante.” The same author refers that Jiménez de Cisneros “cited for the first time numerous mineral deposits in Alicante”, this case, precisely, of the Crevillent aragonite. However, it concludes that, despite «the important contributions of his contributions, [éstas] they have not been sufficiently valued.

The aragonite of Crevillent and Jiménez de Cisneros

In the coming months Belmonte and Satorre, together with their colleague F. J. Molina, they intend to publish a short work, in collaboration with the curator of the Geominero Museum, Ramón Jiménez, to characterize the Crevillent aragonite deposit more precisely and make its mineralogical peculiarities known.

In the same way, the intention is to continue with the work of recovering the figure of Jiménez de Cisneros and his work on the Crevillent mountain range, which began years ago from the University of Alicante itself and the Jorge Juan Institute.

Since 2017, Belmonte and Satorre have been promoting initiatives that, with the support of the City Council, are making it possible to recover the figure of the naturalist. For these archaeologists, “the involvement of the grandchildren of Jiménez de Cisneros is being essential in this work, as well as the support of the different institutions and people who, for some time now, have been supporting them in these initiatives developed from Crevillent” .

So far there are various initiatives developed by the City Council around the figure of Jiménez de Cisneros, under the coordination of Satorre and Belmonte. More than 6,000 people visited the exhibition in 4 months, they took a summer course at the UMH, publications and audiovisual directed by Roque Ortiz, and a comic, with illustration by Borja Estela. In a few weeks a course will take place at the Cefire of Elche in Crevillent. Pending is the dedication of a street, in Crevillent, an initiative that has almost 100 firms from the academic field. And, ahead, many more projects.