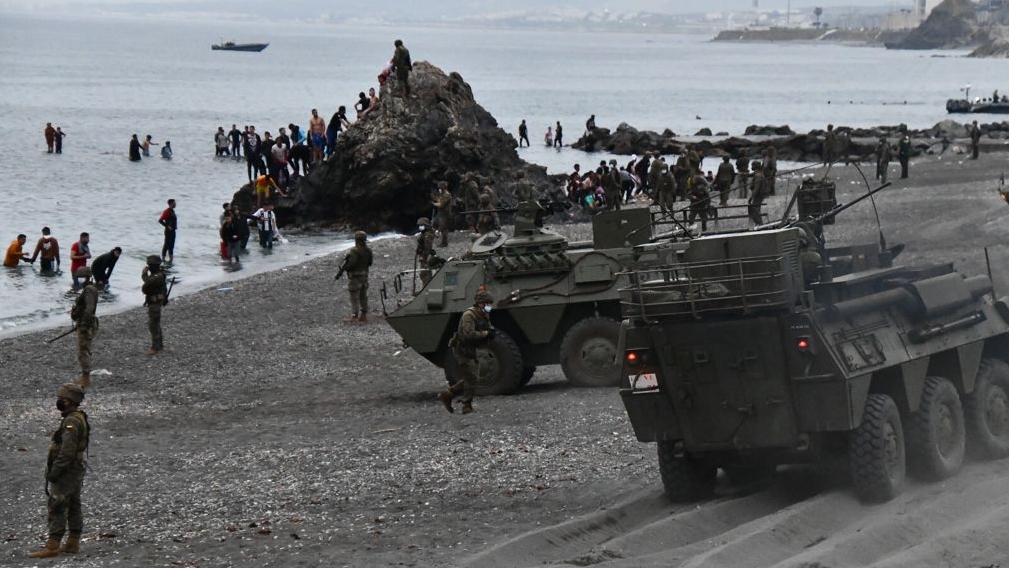 Several Army units were deployed in Ceuta early Tuesday to help control the city’s streets after the entry of nearly 6,000 immigrants, most of them Moroccans, through the border breakwaters. The arrival of people swimming and on foot was constant throughout Monday and entire families jumped into the sea before the passivity of the Moroccan authorities. Among the newcomers, it is estimated that there are about 1,500 minors. A man died trying.

The Army, according to the Efe agency, has gone to the Tarajal ships, where a good part of the immigrants are concentrated, mainly minors. It has also deployed tanks on the Tarajal beach. The objective is to group the newcomers, collaborate in logistics and help keep calm in these areas as well as in other places where the presence of groups of Moroccan immigrants who roam the city is being verified.

The intention of the Ministry of the Interior is to negotiate with Morocco the return of the immigrants and during the whole day and early on Monday about 1,500 returns were carried out, as stated by Minister Fernando Grande-Marlaska on TVE. Interior has sent 150 police officers to Ceuta to expedite these procedures. The key will be what will happen to the minors who are not subject to these return agreements. “In accordance with the law and international treaties we will protect minors,” the minister assured.

The entry of 6,000 people irregularly in a single day is an unprecedented event in Spain. Not even at times of greatest migratory pressure have similar figures been reached. The most recent record was broken on the weekend of November 7 and 8 in the Canary Islands, when 1,500 people entered in a single day and that weekend almost 2,200 migrants landed. The massive entry of Moroccans, due to the inaction of the security forces of the Moroccan gendarmerie, occurs in a context of diplomatic tension with Morocco. Rabat is upset with Spain for the admission to a hospital in Logroño of the leader of the Polisario Front and president of the Sahrawi Arab Democratic Republic (SADR), Brahim Gali, 73 years old and suffering from covid-19. The Ministry of Foreign Affairs justified the reception of the Saharawi leader, requested by Algeria, “for strictly humanitarian reasons”, but Morocco considered the gesture as a “premeditated” decision and taken “behind the back of a partner and neighbor.” Rabat noticed that he was taking note.

During his speech on TVE, the Interior Minister disassociated the crisis from the tensions with Rabat. “We have an absolutely fruitful relationship with the Government of Morocco on migration matters. We see how many people die at sea. We are in a migration crisis that is ongoing over time, ”said Grande-Marlaska. “We have three years with important migratory crises. This is an exceptional situation, but in others that are also relevant, we have managed to reverse the situation ”.

The President of the Government, Pedro Sánchez, has published a message of support for the city on Twitter. “My priority at this time is to restore normalcy to Ceuta. Its citizens must know that they have the absolute support of the Government of Spain and the utmost firmness to ensure their safety and defend their integrity as part of the country in the face of any challenge ”. Sánchez has canceled his trip to Paris scheduled for this Tuesday to participate in a summit that will discuss financial support programs for the African continent and will make an institutional statement after the Council of Ministers, which will address the situation in Ceuta and also in Melilla.

My priority at this time is to restore normalcy to Ceuta. Its citizens must know that they have the absolute support of the Government of Spain and the utmost firmness to ensure their safety and defend their integrity as part of the country in the face of any challenge.

After midnight on Monday, the meeting of the Ceuta Operational Coordination Center (Cecor) concluded in which it was agreed to create a coordination committee with all the State security forces to “control all the sensitive points of the city” and “maintain the order of the streets ”, according to the Government Delegation. The Civil Guard also reinforced its presence on the border, breakwaters and border perimeter.

The members of the Logistics Support Unit number 23 (ULOG-23) have also been activated with the intention of installing bunk beds for the reception of immigrants who have entered. The city will enable the Benoliel stadium to take adult Moroccans who are in the street there, and then proceed to return them, according to the Government Delegation. The little ones will remain, for the moment, in a camp for minors and in the Tarajal warehouses.

86 sub-Saharan migrants have jumped the border fence between Spain and Morocco in Melilla and have managed to access the city at dawn this Tuesday. The entries, which have occurred in different batches, began at 4:45 am in the area of ​​the South dike, where the Local Police cut off traffic to “facilitate control” of the National Police and the Civil Guard. Among the new arrivals there was a woman who has needed the assistance of the Red Cross.

The Government Delegation of Melilla has reported that there were more than 300 people who tried to jump the fence, but that the “anti-intrusion” device of the Civil Guard, in which the National Police also participated, managed to prevent access to more than 200 migrants. Three agents of the Civil Guard have required medical assistance for minor bruises. The delegation’s note indicates that there was “active collaboration of the Moroccan security forces”.

As police sources have informed Efe, immigrants have entered Melilla in various groups, the first of which is more numerous, and once in the city they have headed to the Center for the Temporary Stay of Immigrants (CETI), escorted by patrols of the Civil Guard and the Local Police. Sub-Saharan Africans have toured the Promenade celebrating their entry into the city with displays of joy and shouts of elation. The president of Melilla, Eduardo de Castro, already expressed his Government’s concern on Monday about the massive entry that was taking place in Ceuta, and his predecessor and regional leader of the PP, Juan José Imbroda, warned that “Melilla will come later” .