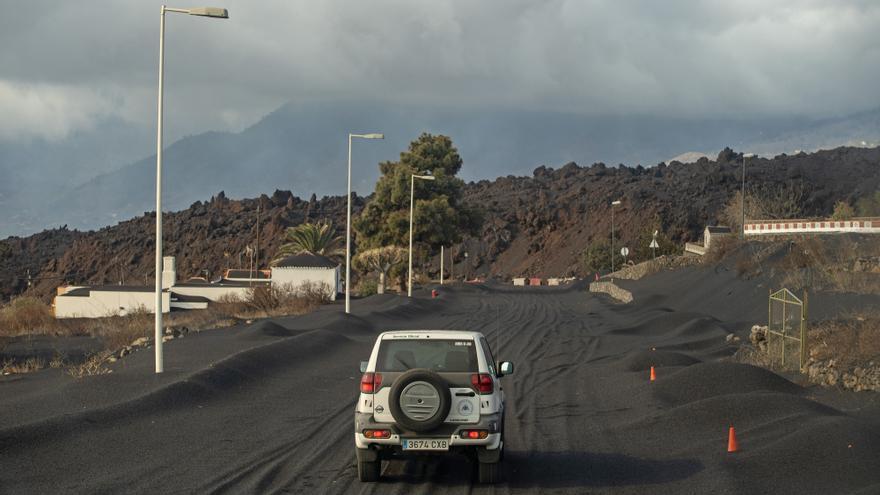 The ash expelled by the Tajogaite volcano already covers 6,800 hectares of the total area of ​​La Palma. If we extrapolate this data to the extension of land occupied by the metropolitan area of ​​Tenerife (252 square kilometers and the capital of Gran Canaria (100.55 square kilometers), the patch of volcanic material would cover 27% of the sum of the square kilometers of Santa Cruz de Tenerife and La Laguna and 68% of Las Palmas de Gran Canaria, that is, three-quarters of its territory.

The ashes from La Palma would cover 27% of the metropolitan area.

At the island level, the ash mantle covered 4.4% of the map of Gran Canaria and 3.3% of the silhouette of Tenerife. Following the pattern of the metropolitan area of ​​Tenerife, the origin would be in the bus interchange located in front of the monument to Father Anchieta. The damaged area would slightly touch the edge of La Trinidad closest to the TF-1, but would not advance in the direction of the historic center of La Laguna. In its fall towards Santa Cruz de Tenerife, the ash flow would end up widening in the direction of the nuclei of Geneto and San Bartolomé de Geneto, it would enter the Central Campus of the University of La Laguna (ULL), it would bury the point in the that the Cruz de Piedra rises and, above all, it would generate a disaster on Line 1 of the Tram as it passes through Avenida de Los Menceyes, Campus de Guajara and the Hospital Universitario de Canarias (HUC). The other large sanitary complex on the island, La Candelaria, would also be lost due to the expansion of the ash. The industrial estates of Los Majuelos and El Mayorazgo would be erased from the map. The greatest risk, by far, would occur when the volcanic sediments reached the Refinery facilities, although the possible fajana would form near the Muelle de la Hondura, also very close to the Cepsa deposits.

The ashes from La Palma would cover 27% of the metropolitan area.

The Auditorium would be in the crosshairs of a line that would not reach the Heliodoro Rodríguez López, but that would take the Santiago Martín Pavilion, the official venue of the meetings that Lenovo disputes at home. The García Sanabria Park, one of the lungs of Santa Cruz, for now would be outside the perimeter affected by the ashes of the Tajogaite.

In this simulation, in the case of Las Palmas de Gran Canaria to the west it would touch the towns of Tamaraceite, Las Majadillas and El Toscón, descending towards Almatriche and San Lorenzo. Los Giles would be within the flooded perimeter but, for now, the Doctor Negrín Hospital, to the north, and the Gran Canaria Stadium, on the south side, would be safe.

A part of Lomo Blanco would also be touched by a shadow that would seek an outlet to the sea in the vicinity of Triana and the Castillo de San Cristóbal. Another area that would be affected would be Avenida Primero de Mayo. Regarding the roads most affected by this accumulation of ash, the most relevant incidents would be located in sections of the GC-3, GC-21 and GC-110.

If the volcano erupted in Los Lomos, to the northwest of the Los Giles neighborhood, the mantle of lava and pyroclasts would occupy a large area of ​​the city until it reached the sea and buried the Avenida Marítima between Carvajal and the Super Police Station; a second branch would reach the Sports Pier.

In between, the lava, in its advance, would devastate the Díaz Casanova and Lomo Blanco industrial estates, the neighborhoods of Las Torres and La Feria until leaving the GC-23 highway between El Negrín and La Ballena, a commercial center that would be buried. The stream located further south would make Cruz de Piedra, Las Rehoyas and El Polvorín disappear, until May 1st; the next would do the same with part of Schamann and San Antonio; while the one that is further north would occupy Avenida de Escaleritas and so on down to Arenales and Ciudad Jardín.

The comparison between the two Canarian capitals would reach much more dramatic tints if we placed the 6,800 hectares of palm ash on El Hierro or La Graciosa. In the first case, the buried area would exceed 25% of the island’s surface, while in the Lanzarote case, the ashes would fill two and a half maps the size of La Graciosa.