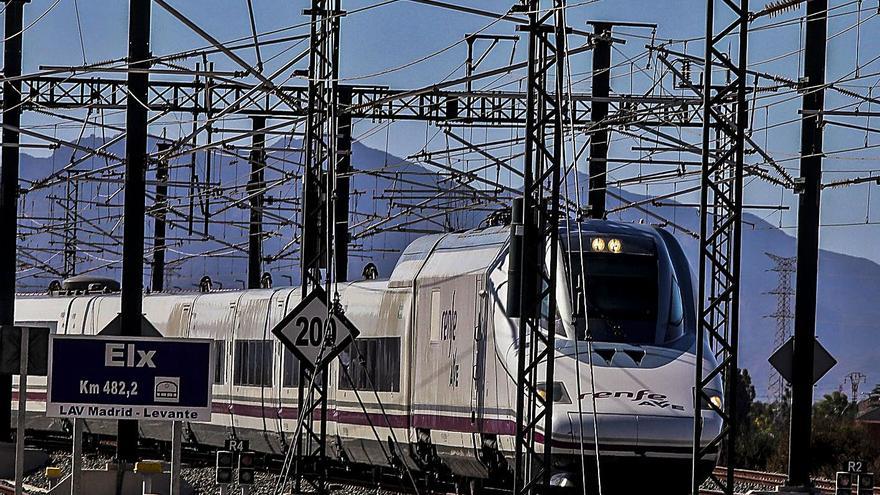 The Elche station of the AVE (Spanish high-speed) has overtaken Alicante in 15 minutes less each way with Madrid, which has been possible by making the lines independent, by not having to go through the Alicante terminal and by reducing intermediate stops, for example, with Villena or Cuenca. The advance is significant and makes the hassle that today involves having to travel to Matola somewhat more competitive To get on the high speed, when to go from Alicante you go up in a suburban area in the urban area of ​​Elche (which is free) and you arrive directly at the central station and terminus of the capital of the province.

Some businessmen assured and continue to maintain that the line needs more routes with the capital of Spain, and at times throughout the day, to gain weight and, for example, to avoid having to wake up early, since the convoy leaves at 6.55 hours, which means that the arrival in the capital of Spain is at 9.15 hours. That is, in 140 minutes. If the procedures are for that day it is perfect, but they understand that it has to be an incentive to move other sectors, such as tourism, and the current schedules are not attractive at all. On the other hand, from Alicante, the AVE does not leave until practically an hour later, at 7.45am and arrives at Atocha at 10.20am, but there are trains throughout the day between both cities. Depending on why you have to go to Madrid, there are two different alternatives, but the one that ends at the Alicante terminal from Atocha takes 2.35 hours; that is, 15 minutes more than Elche. Orihuela, which also has a stop, started up this month and at the same time as the Matola halt, is located at the same times as the Alicante station, but it is evident that for its travelers it is much better to go to the Miguel Hernández intermodal You have to travel to the Alicante terminal for the trip to Madrid because of the enormous time savings it entails (just going to Alicante is an hour). In fact, the mayor of Orihuela, Emilio Bascuñana, recently recalled that it takes longer to get to Valencia than to Madrid, and called for an urgent improvement of the vicinity in the province. Entrepreneurs from Elche may still doubt where to catch the AVE, whether from Elche or Alicante, but for those from the Vega Baja that question does not exist or even arises, another question is the current discomfort of only two schedules, at the beginning and at the end of the journey.

At night, the train from Atocha to Elche is even faster, as it runs the trip in just 128 minutes. It leaves at 7:55 p.m. and arrives at 10:03 p.m. The one in Alicante takes two hours and 22 minutes (14 more minutes). Exactly the same time as Orihuela.

Alicante must gain speed in the coming months and reduce the times with Atocha, approaching at least Elche because Renfe is going to replace the current trains with more modern ones, which have been covering the line since 2013. In addition, its incorporation was very controversial because the speed The peak with which the line was sold dropped from 300 kilometers per hour to 270. This meant that about 20 more minutes were “lost” each way. As of March 7, the trip from Alicante to Madrid is scheduled to last two hours and ten minutes for the fastest (Elche would still be below), although those with stops can continue going until two hours and 40 minutes, so they will never be as fast as the one from Elche and the one that reaches the Vega Baja, reports JFBenito. And both Elche and Orihuela have battles to fight jointly but when the train arrives in Murcia because it is possible that the stop that is less profitable in terms of travelers is suspended from all stops. Both municipalities are not willing to lose the tourism battle to the coast.

Fewer commuter trains due to works in Murcia

Renfe will reduce from March 1 and for two weeks the frequency of trains between the province and Murcia, and it has modified the schedules due to the works of the Mediterranean Corridor, planned by Adif in the accesses to the capital of the Region. With the new schedule, two commuter trains in the direction of Alicante and four Murcia are suspended, and the timetables of the new trains with that line are modified. A total of 41 trains will circulate on weekdays instead of the 48 that link the capital of the province with the capital of the region of Murcia.